Inside the all-new youth RZR with Pro XP DNA 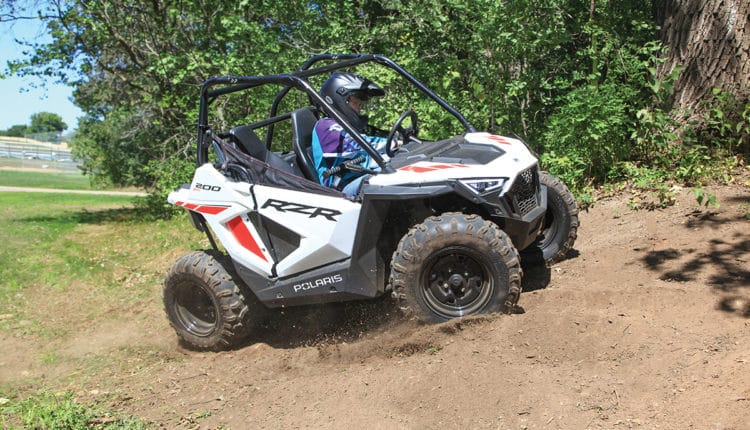 Thanks to Ford, Daimler, Harley, the Davidson brothers, the Wright brothers and more, man has long melded with machine to create unstoppable cybernetic organisms. Prior to racing UTVs, seven-time NASCAR Cup champion Jimmie Johnson began racing on a Yamaha PW50 before becoming an MTGP Superlite champion on Hondas. Eight-time AMA SX/MX champion Ryan Dungey and X Games legend Travis Pastrana also started on 50s. Since 2010, many off-road prodigies have started out on a Polaris RZR 170, and they’ll be continuing their legacies through the pro ranks. Now Polaris has improved on 11 years of the RZR 170 with the all-new 2022 RZR 200 that carries the Pro XP DNA. While the entry-level RZR has more safety features than ever, it’s also engineered to win races and groom future champions on tracks around the country and world. Here are 10 things about the RZR 200 every parent and racer will need to know. 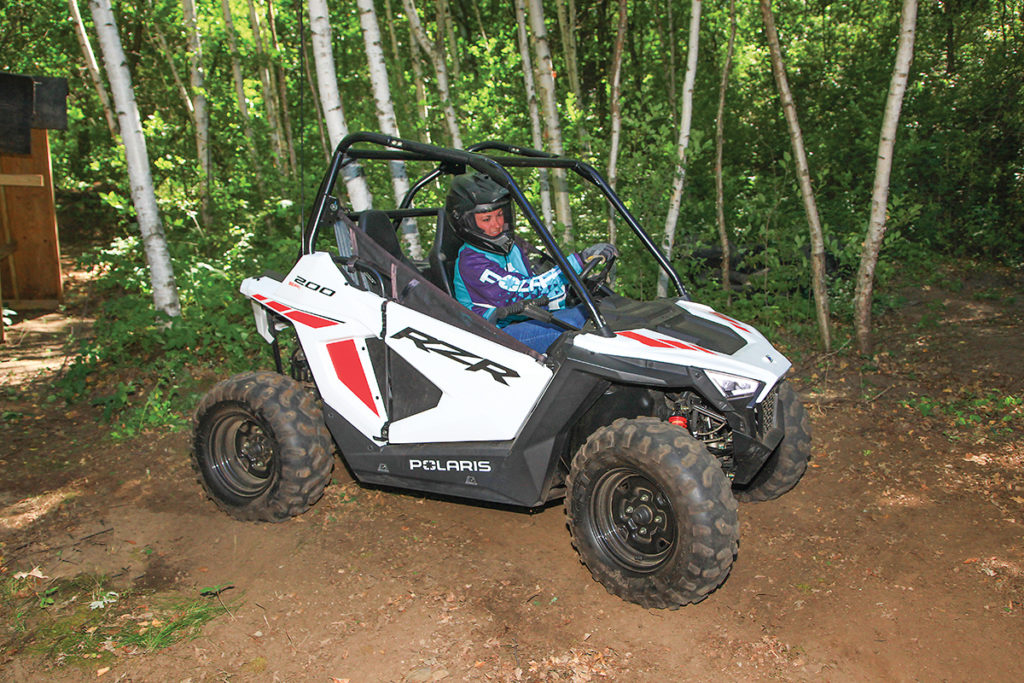 Past youth machines have had intake and/or exhaust restrictors that had to be mechanically installed and removed; others have had throttle limiters. One of the 10 must-know RZR 200 facts is Polaris’ first use of Helmet Aware Technology with the RZR 200. Youth UTVs, including the RZR 170, come with two helmets, and the new 200 comes with two helmets and a Bluetooth beacon. Attaching the beacon to one of the helmets, parents can use the Polaris Ride Command app to prevent the RZR from starting if the beacon is out of range of the gauge sensor. It also has a plastic guard on the floorboard to prevent anything like a helmet on the floor or the passenger’s foot from getting under the throttle pedal. 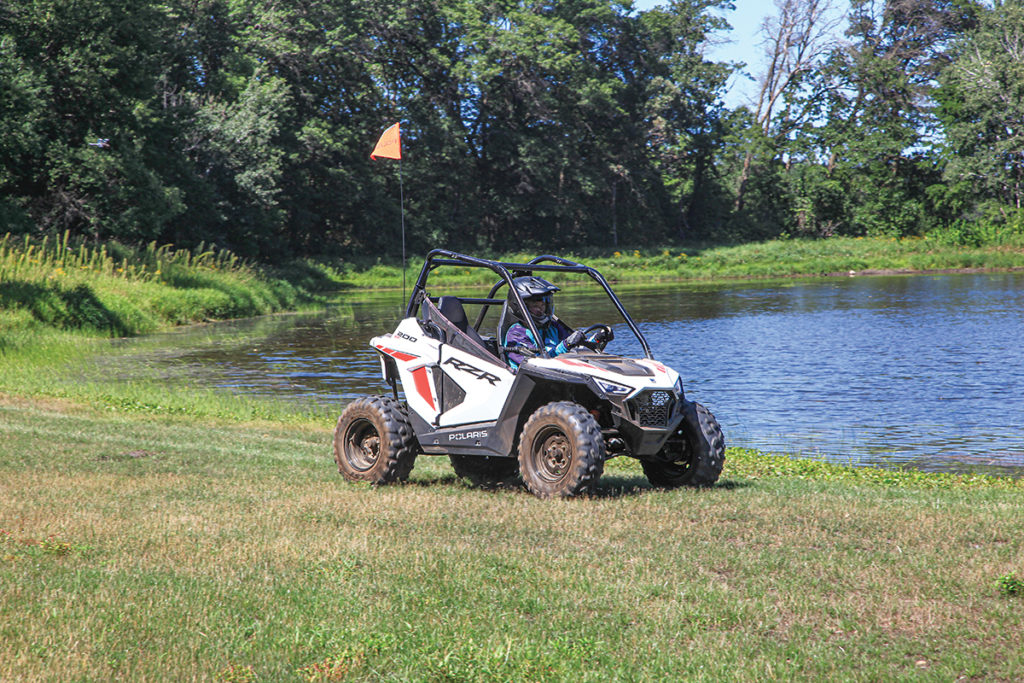 There’s more safety technology in the 10 must-know RZR 200 facts. Parents can also limit top speed on their Ride Command app to pair speeds with the rider’s ability via the Youth Ride Control feature. No more mechanical limiters or restrictors! Also, geo-fencing allows parents to set up the containment area for their youth pilots, and the ignition will cut off if the RZR 200 is driven outside the boundaries. It gives peace of mind and protects prodigies if parental attention is distracted by texting photos or getting the gas can. As skills and experience grow, parents can increase the speed from 10 mph to 25 mph and increase ride area size. 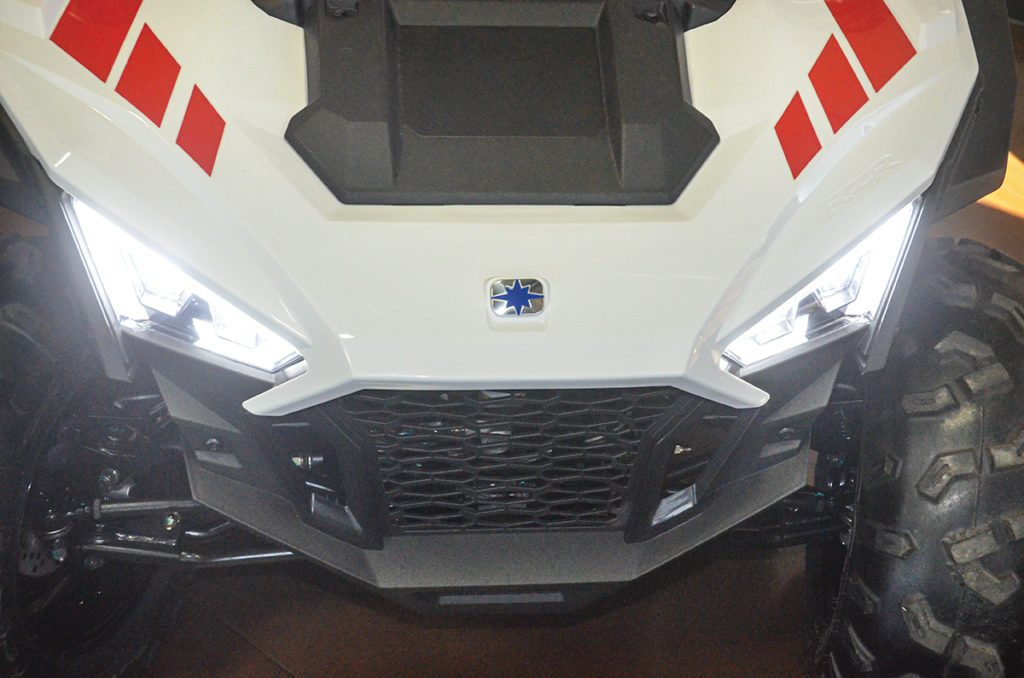 Powerful headlights are part of the 10 must-know RZR 200 facts. The RZR 200 comes with bright LED headlights and a taillight for daytime visibility at public riding areas. This is in addition to the standard safety whip and flag and the two helmets. 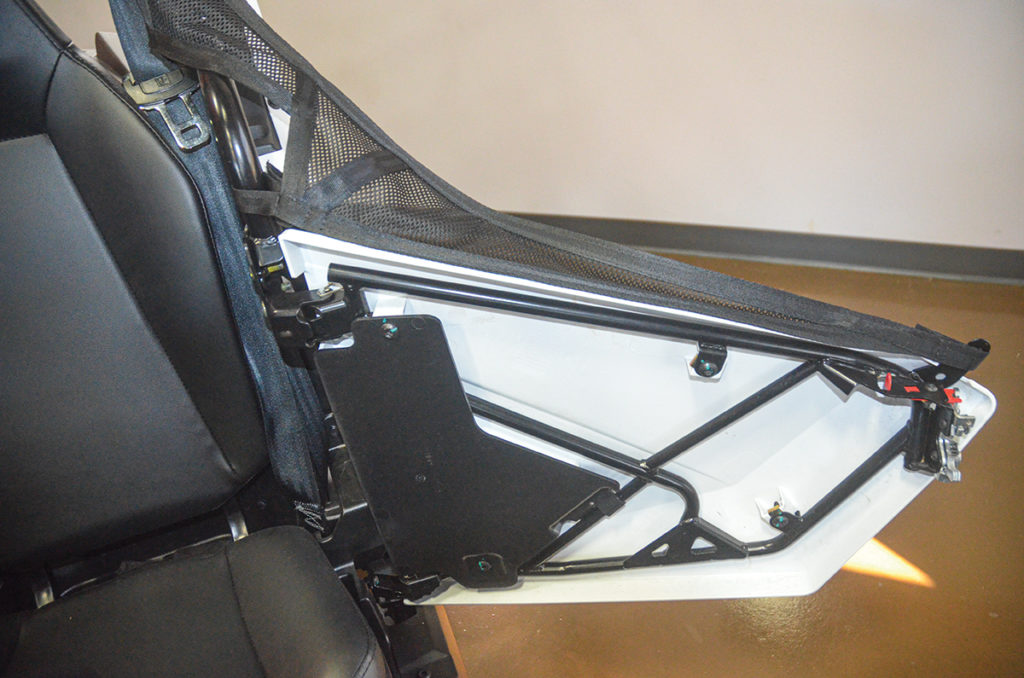 The RZR 200 comes with Pro XP-inspired half doors, whereas past 170s had nets. The doors have Pro XP-styled skins and tubular frames, and the latches are tiny and hard to reach by occupants, so they can’t be opened accidentally. They’re painted red. The doors are topped by full-length nets to keep arms inside the cabin, and the nets open with the doors. 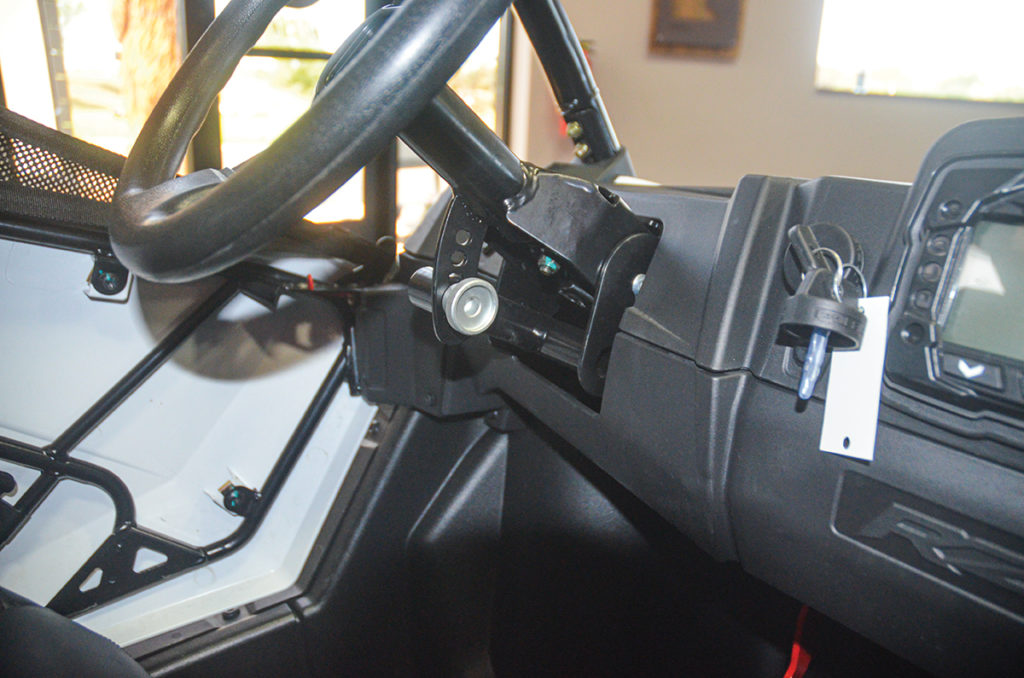 Like bigger RZRs, the new 200 has a tilt steering wheel, but it’s not a hydraulic unit or easily adjusted. A large thumb screw lets the parents set the optimum tilt level for the 10-and-up youth(s), then tighten with pliers to prevent maladjustment. This is an improvement over the 170, as its adjuster requires a wrench and is obstructed by bodywork. The throttle pedal is black, and the 170’s limit screw is absent on the 200, while the larger brake pedal is painted red. The shifter is simple and has a large F-N-R on the knob, and the hand-operated parking brake rides in front of the selector. The fuse box rides to the left of the driver’s seat so a parent can quickly cut power if any electronics go awry. 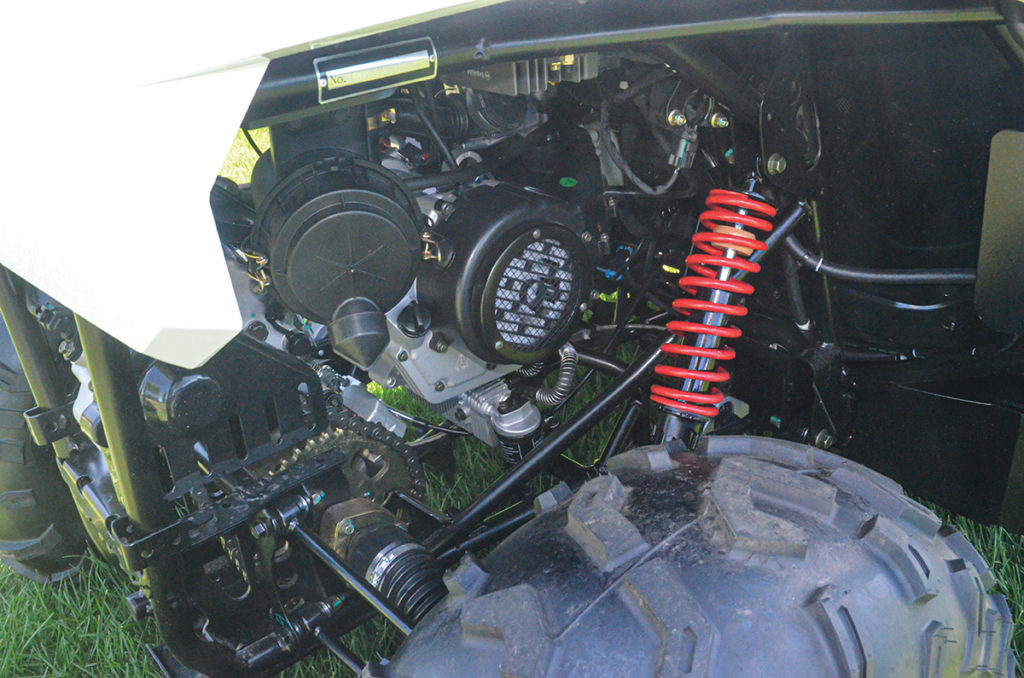 6) LARGER DISPLACEMENT FOR THE 200 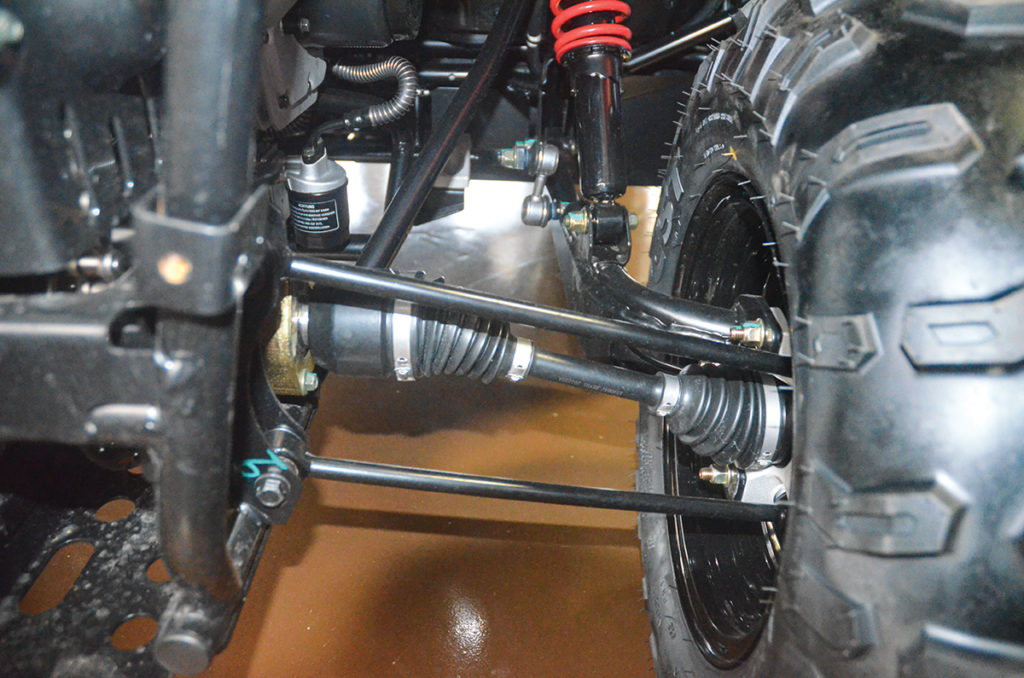 RZR 170s have a rectangular swingarm with 5 inches of non-independent travel in back and only lower A-arms in front. Since the RZR 200 has independent rear suspension, it got two rear axles with inner and outer CV joints, which is a huge upgrade. The old 170 has its single hydraulic caliper at the right-rear wheel, and the 200 has a larger caliper in the center next to the drive sprocket for more centralized mass.

Up front, the 170 has strut-style suspension with hydraulic calipers on each wheel, which are shod with 19×7-8 Duro tires. The RZR 200 has dual front A-arm suspension with larger hubs and brake rotors, and huge tie-rods ride in front of the hubs with a huge steering rack, like Trophy Trucks and Wildcat XXs. Not even Pro XPs have tie-rods in front. Also, the RZR 200 has a huge upgrade in tires with CST 24×8-12s front and 24×10-12s rear, which greatly improve ride quality and flotation. 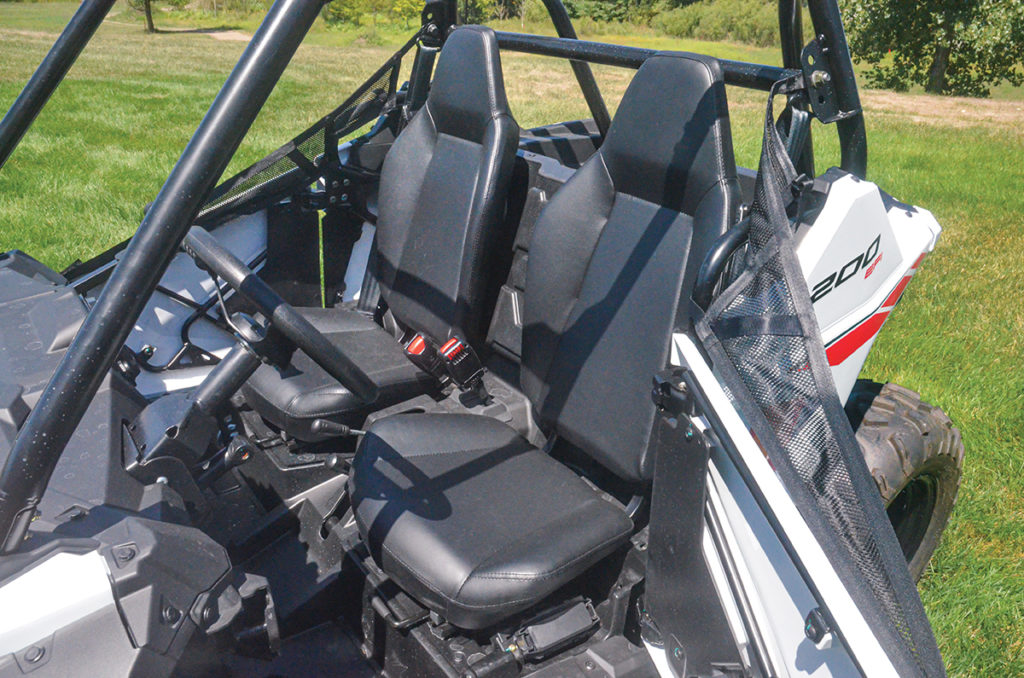 While the RZR 170 has nets and tubular side bolsters, the RZR 200’s enclosed doors provide more security. While the seats are the same, both seats are adjustable on the 200; only the driver’s seat adjusts on the 170. Wheelbase and width are the same at 65 inches and 48 inches, respectively, but the engine sits further back in the frame for more cabin room. New RZR 200 instruments have the Youth Ride Command with Helmet Aware Technology, geo-fencing, Speed Limiting, plus selectable modes and nine parameter read-outs. 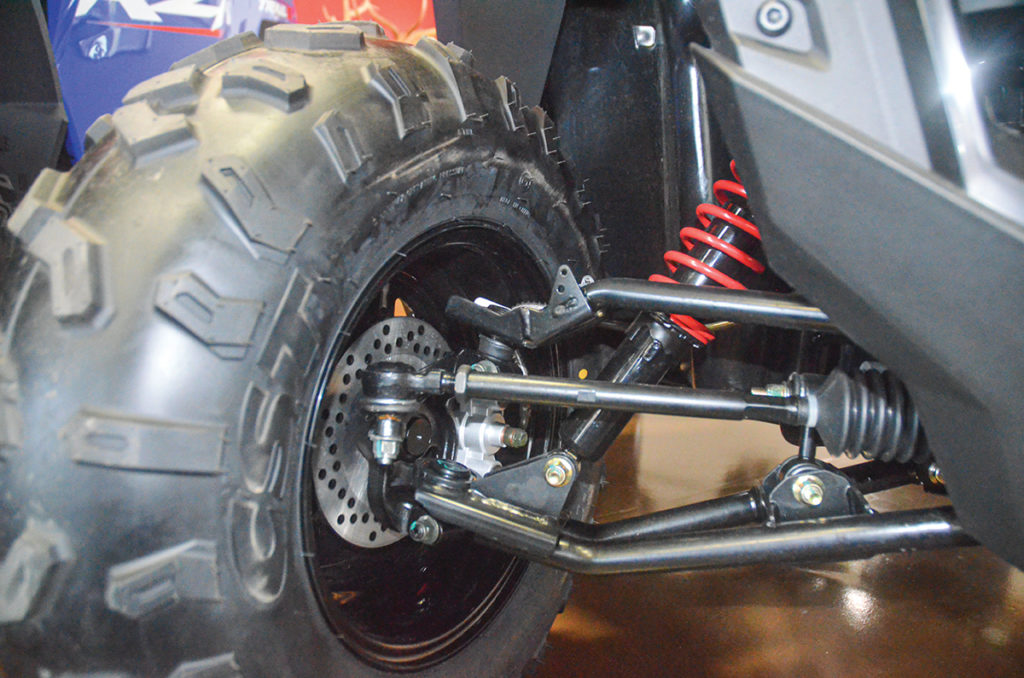 By far, the biggest upgrade is the 200’s all-new suspension with Pro XP-inspired trailing arms in back and gull-wing dual A-arms in front. Trailing arms are constructed with two tubes forming upper and lower hub mounts and converging into one at the front pivot. Plates sandwich the tubes, forming boxed arms. Upper and lower tubular A-arms are gull-wing-shaped and heavily gusseted, and the RZR 200 has front and rear torsion bars to fight body roll. HPG shocks are five-way preload adjustable and provide 7 inches of front and rear travel, while the 170 only has 5 inches. The RZR 200 weighs 735 pounds dry, while the 170 weighs 532 pounds, and the 200 costs $500 more. 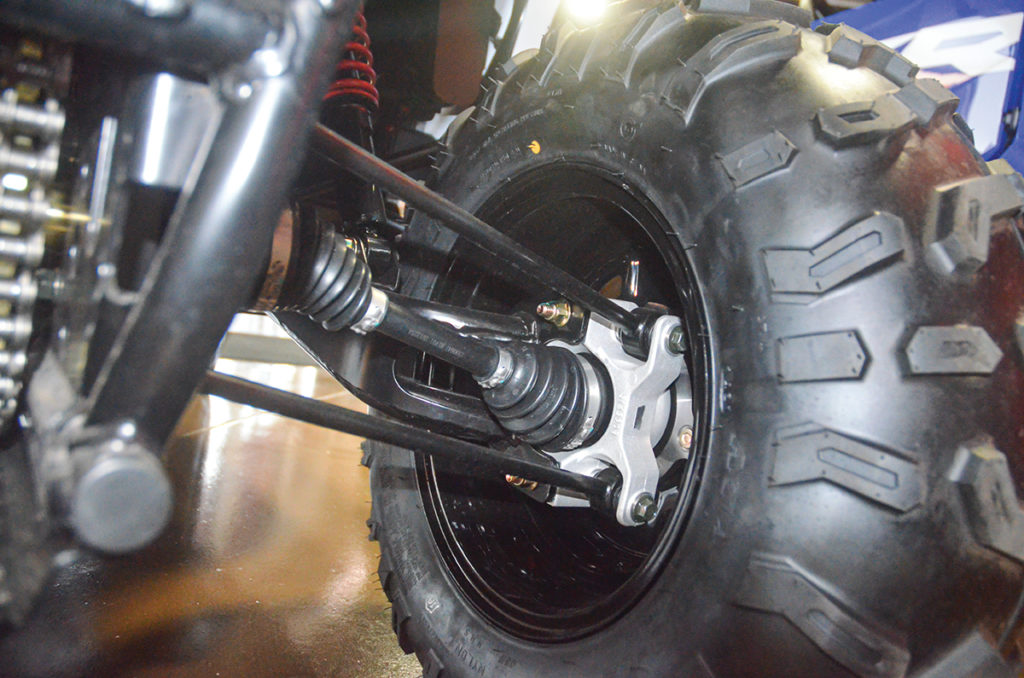 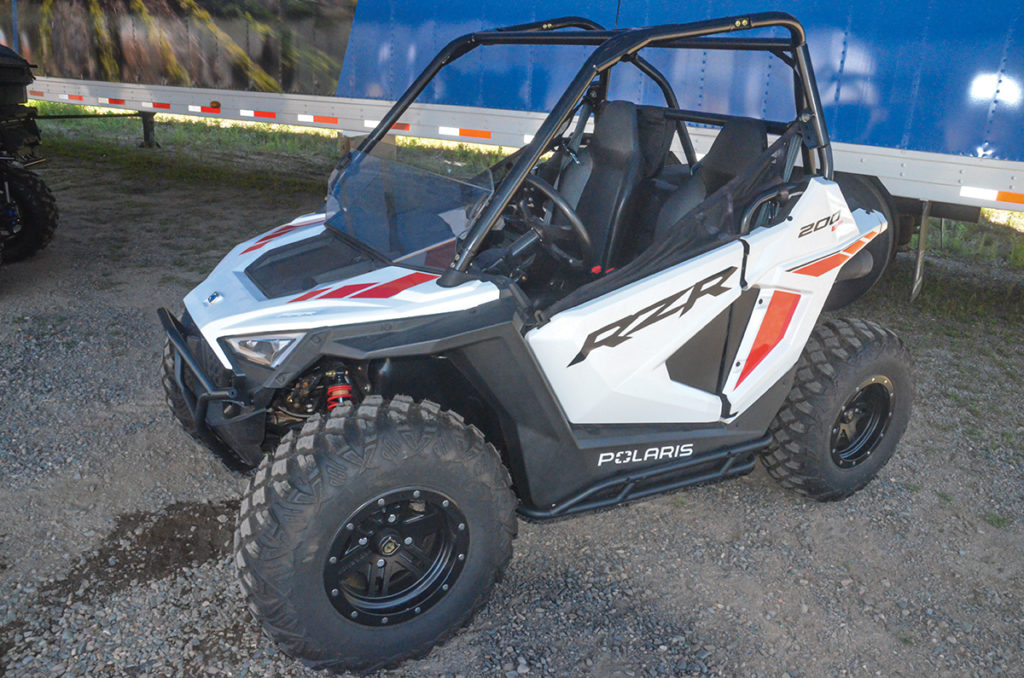 10) BUILT TO RACE AND GROW WITH YOUR RACER

It’s like Polaris shrunk a Pro XP into a youth UTV, and the trailing-arm rear suspension even has double-shear mounts for the radius rods at the hubs (a weak point for X3s and Talons). Gaining 205 pounds also means that construction is more durable and race-ready, as the new suspension and drivetrain can’t account for all of the extra heft. The RZR 200 platform is several levels above the 170 from the factory, and the aftermarket will make it better still. We can’t wait to see what our youth test pilot Graham Smead thinks of it stock, and what aftermarket companies like Lone Star Racing, Elka, Cognito, and SuperATV will produce for youth racing. Full-race RZR 200s will further bridge the gap between entry-level youth and 570 UTVs.

Consider UTV as an Idea for a College Trip