10 UTVs YOU DON’T SEE EVERY DAY 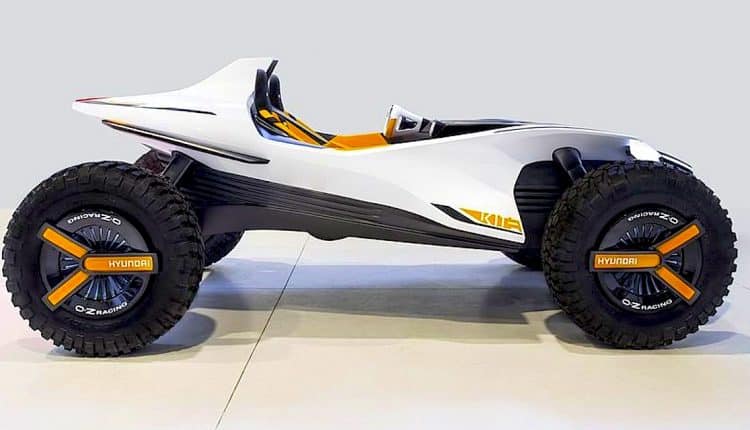 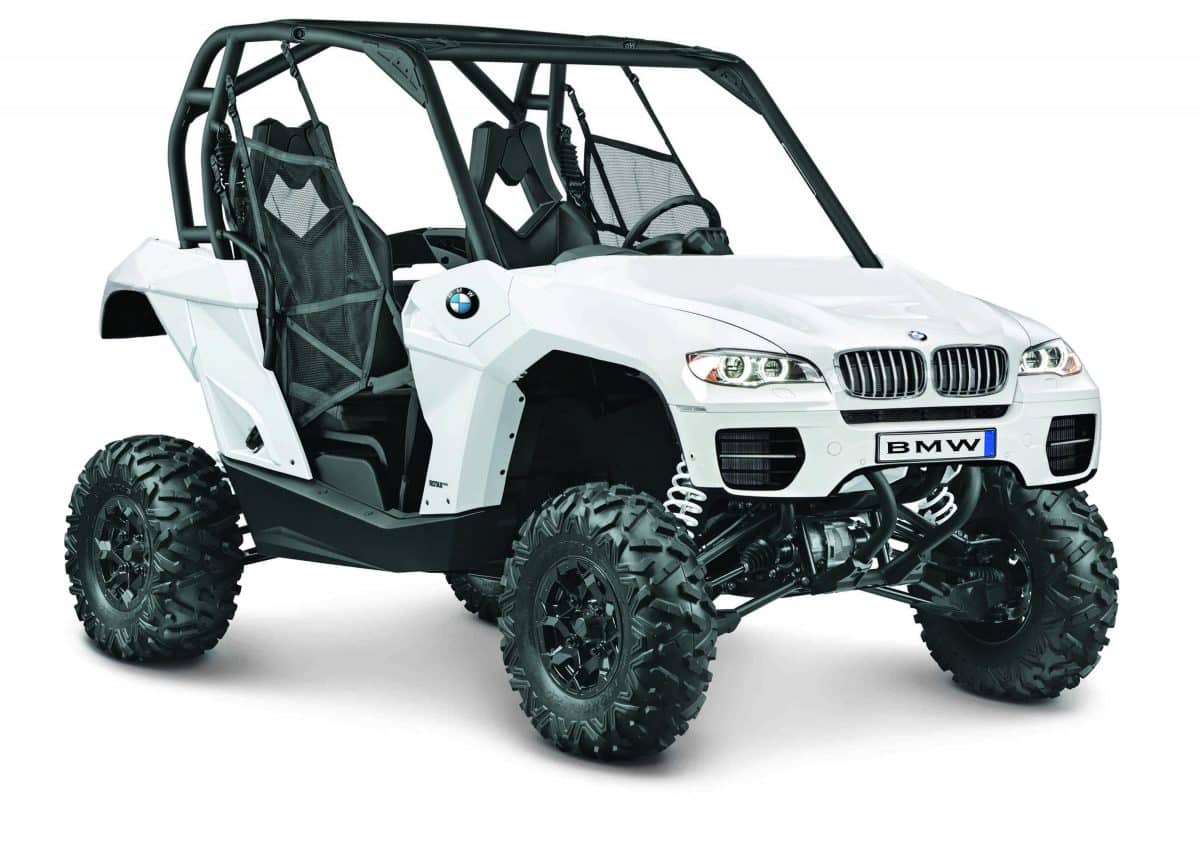 Is this proof that the German car company is going to start selling UTVs? No, this was built to show how automotive style body work could be made to fit existing UTVs and give them a different look. There have been some custom shops who’ve made replica style bodies for UTVs using fiberglass, but that might be too brittle to be practical for an off-road vehicle. They would really have to be molded out of plastic to be attractive to most UTV owners. Are there any companies out there willing to take this idea and go with it? 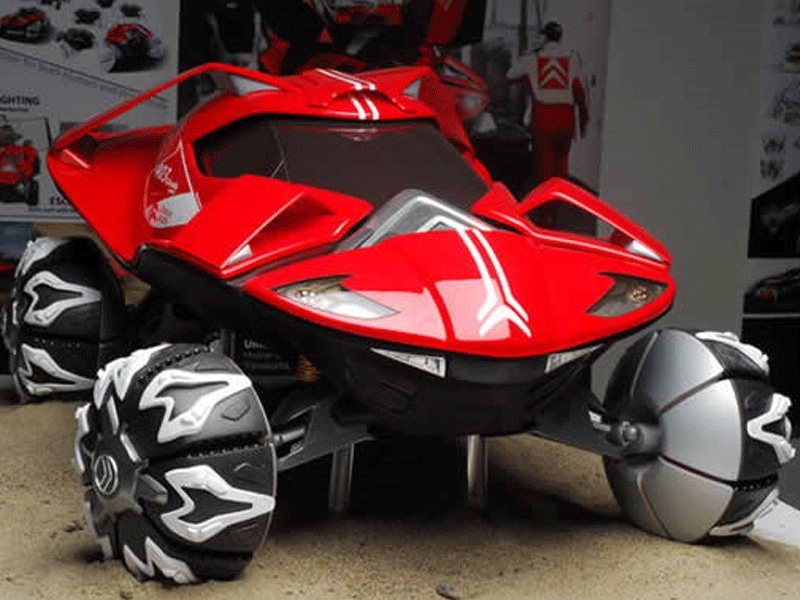 UTV OF THE FUTURE?

Designers who fabricate concept vehicles don’t really have to worry about how functional their idea is. The vehicles just have to be so outrageous that they get everyone’s attention. This one falls into that category. If we knew who the designer of this was we’d give him credit, because it looks like a lot of work went into it. It also has some unique ideas for tires, wheels, bodywork and wings that double as body support. Maybe in 20 years Honda will have a Talon UTV that looks like this. Just remember, you saw it here first. 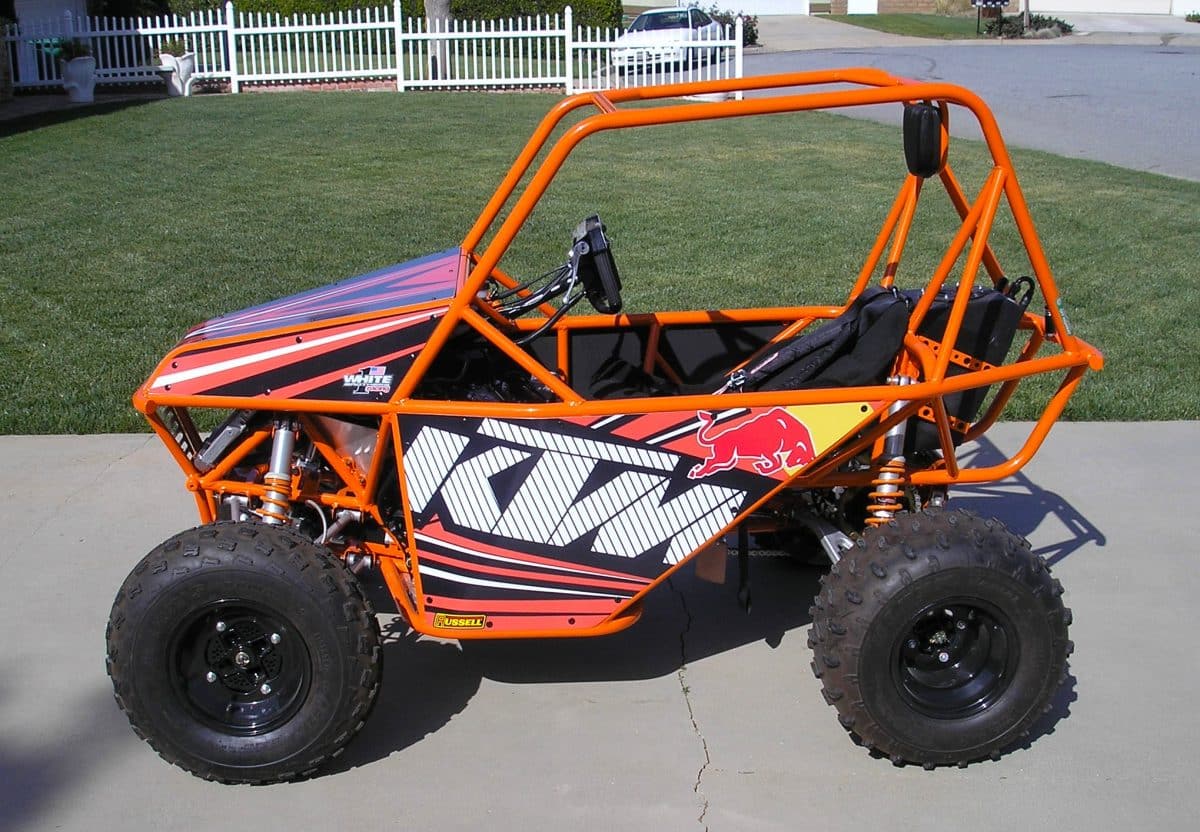 Maybe in the near future KTM will come out with a line of UTVs, but this one here wasn’t a factory project. It was built by a UTV Action reader using a KTM 450 quad as the base. The motor is below the steering wheel and the driver has his feet on each side of it. A cage was built around it with independent suspension and chain drive going to the rear wheels only. This single-seater project was actually built before Polaris came out with their Ace and RS1. 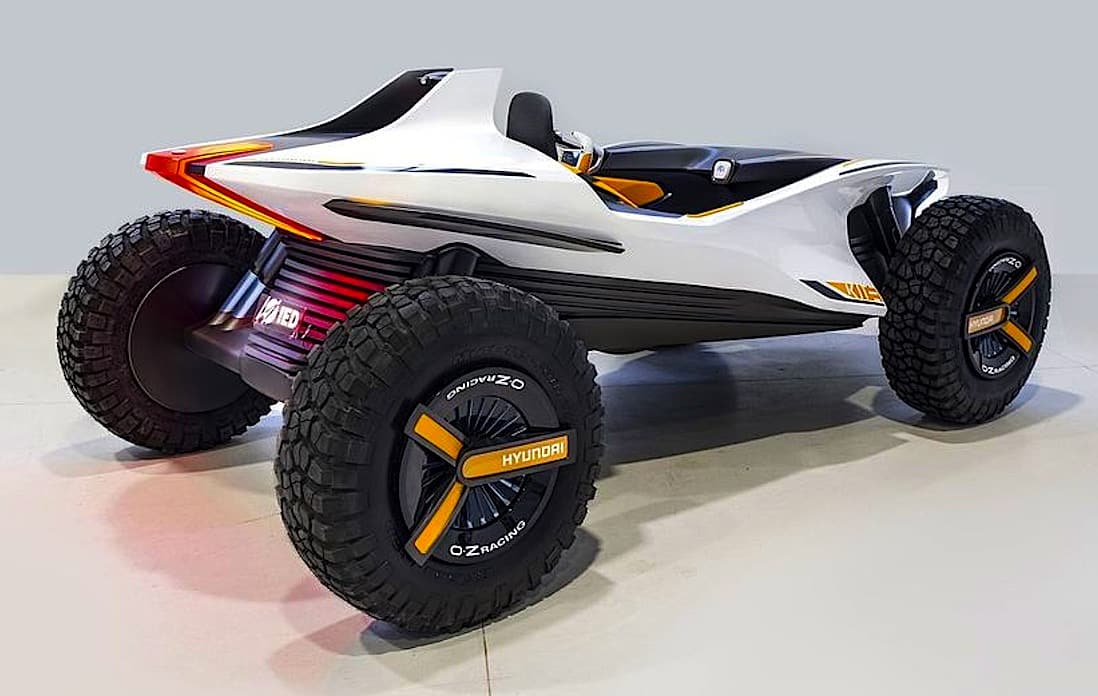 Before you go rushing down to your local Hyundai dealer, you should know that this hasn’t reached production yet. It was built by their engineers as a concept vehicle that was displayed at the Geneva car show. It is electric powered, which is the popular trend these days for vehicles meant for the future. It could be classified as a UTV, but they refer to it as a sand dune buggy. Looks like it could give you a face full of sand from the front tires. After the engineers drove this through the first mud hole, they’d probably go back and redesign the front fenders to be bigger. 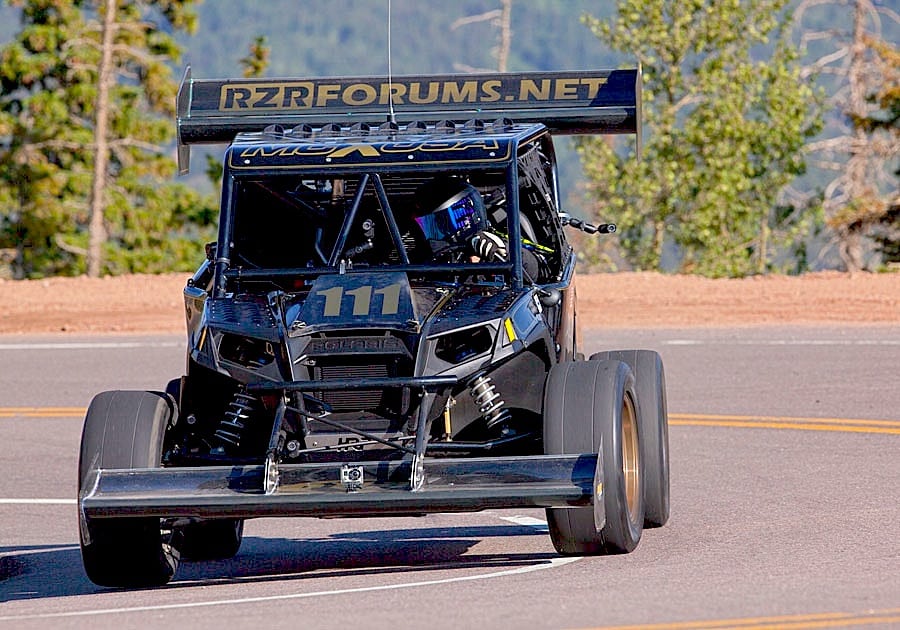 This UTV is not legal for the street, except for the one that goes up Pikes Peak. That famous race that goes up the mountain used to be dirt, but now it’s paved all the way to the top. The classes include cars, motorcycles and quads, but UTVs have been limited to an exhibition race, just to see how they’d do. The modified RZR here actually ran a fast time with the help of sticky tires and wings to provide down force. Remove the wings and put on some different tires and it’d probably do well in rally racing. 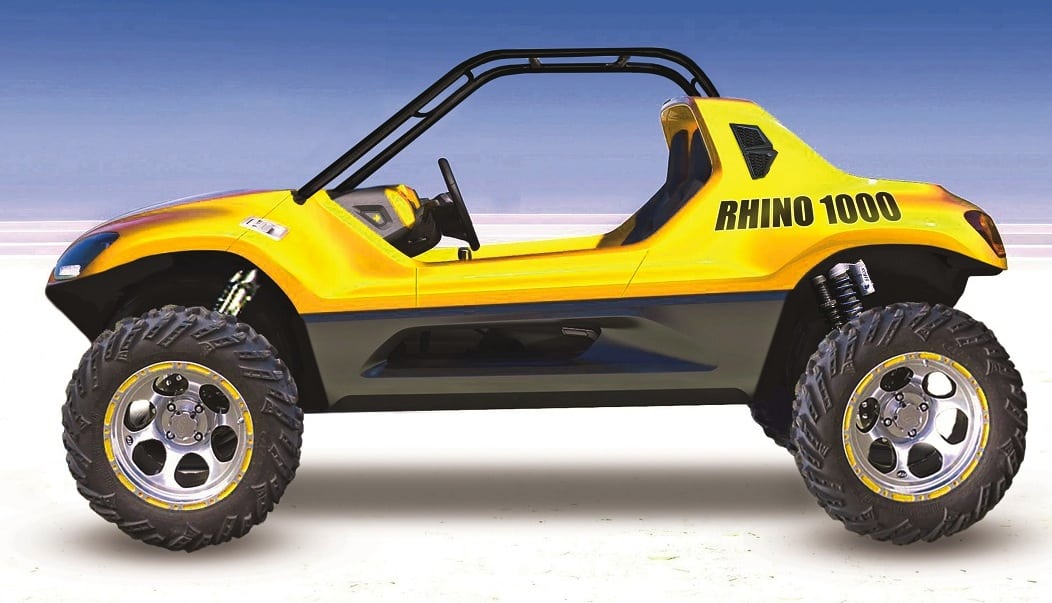 Some years back we got wind that Yamaha was going to come out with a UTV that was bigger and faster than their Rhino 700. People began speculating on what it’d be and what it might look like. This was the visual image that came into the mind of a Dirt Wheels magazine staff member. See how it looks just like the YXZ1000R? Yeah, they were a little off on that bold prediction. 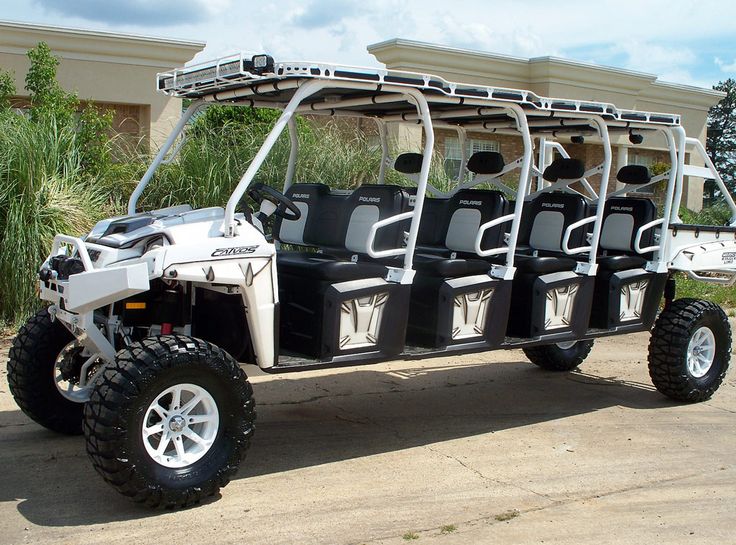 Imagine that you’re on a airplane which lands on a beautiful tropical island. So, what vehicle will pick you up and take you to your luxury resort? Something like this would be the perfect transportation for that. A UTV limo is a great idea for carrying vacationers around the little roads overgrown with lush tropical foliage. We just wouldn’t put the overweight passengers right in the middle. Especially if there are a few jumps along the way. 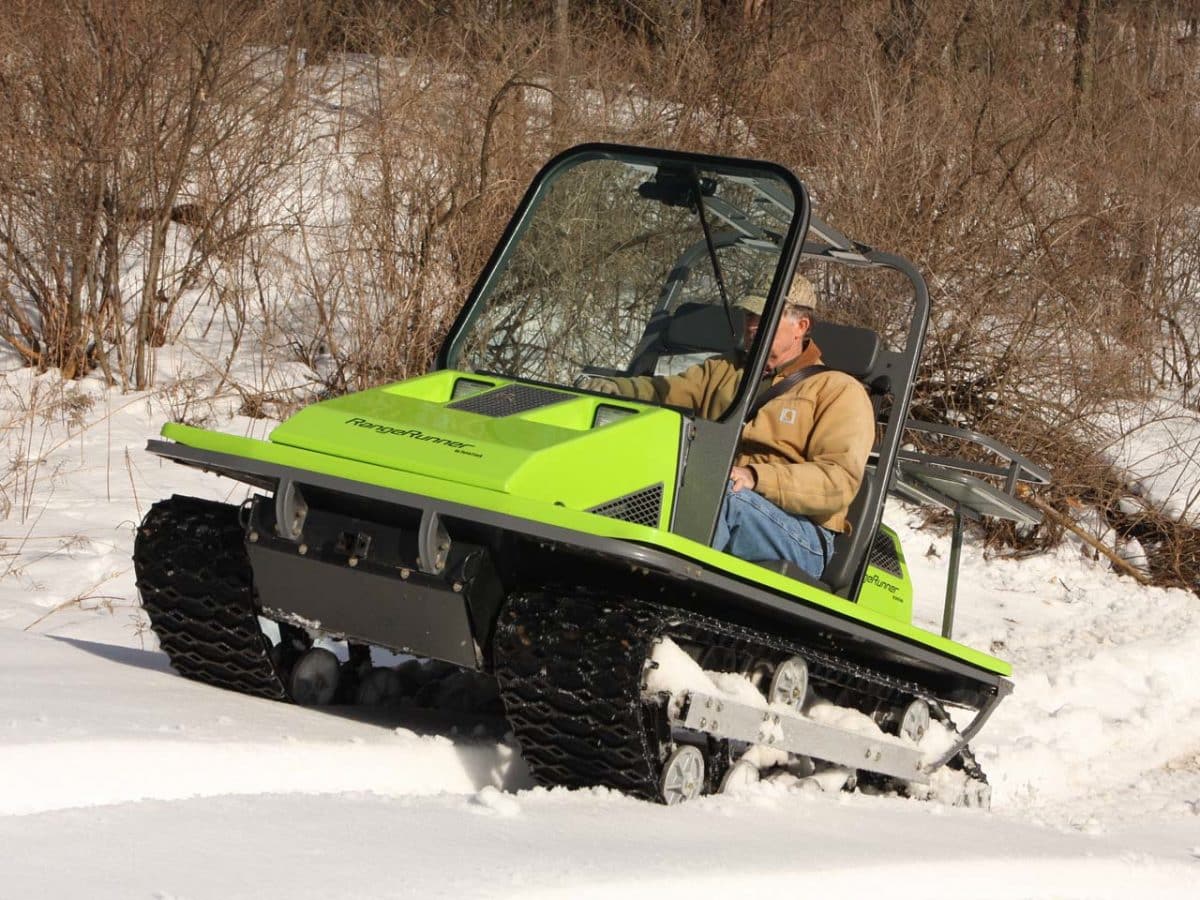 Instead of four knobby tires, this UTV has tracks on each side just like a bull dozer. It was made to keep on moving across snow no matter how deep it is. Just the thing for off-road travel during the winter months way up north. Just like bulldozers and tanks, it steers by way of brakes being applied to one of the tracks while the other gets power. The scooting and pivoting becomes less precise the faster you go. 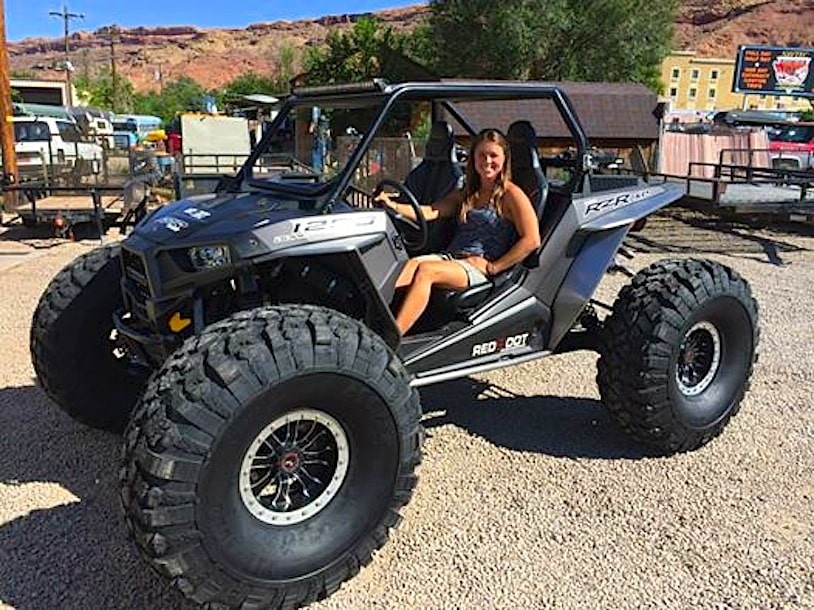 Big tires make it easier to get over gnarly stuff on a rocky trail. For this RZR it has really really big tires. It has to run a much lower gear ratio to be able to turn those giant tires. Modifying things to have enough fender clearance is part of the job too. However, from the smile on this lovely lady’s face, it seems like it was worth the effort. 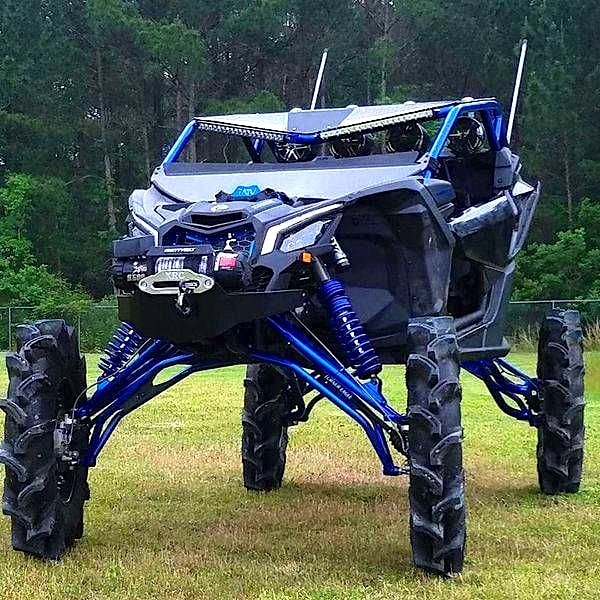 If you ride in muddy areas you may be used to seeing lifted UTVs with big mud tires. However, you usually don’t see that taken to this extreme. You have to stow a step ladder on board just to get in and out of this beast. But still, when you look at this thing, you just want to take it for a ride through deep water and across the toughest mud holes. Even the snorkel intakes would be well above your head when you’re standing next to it.

ON THE PODIUM: UTV RACE RESULTS