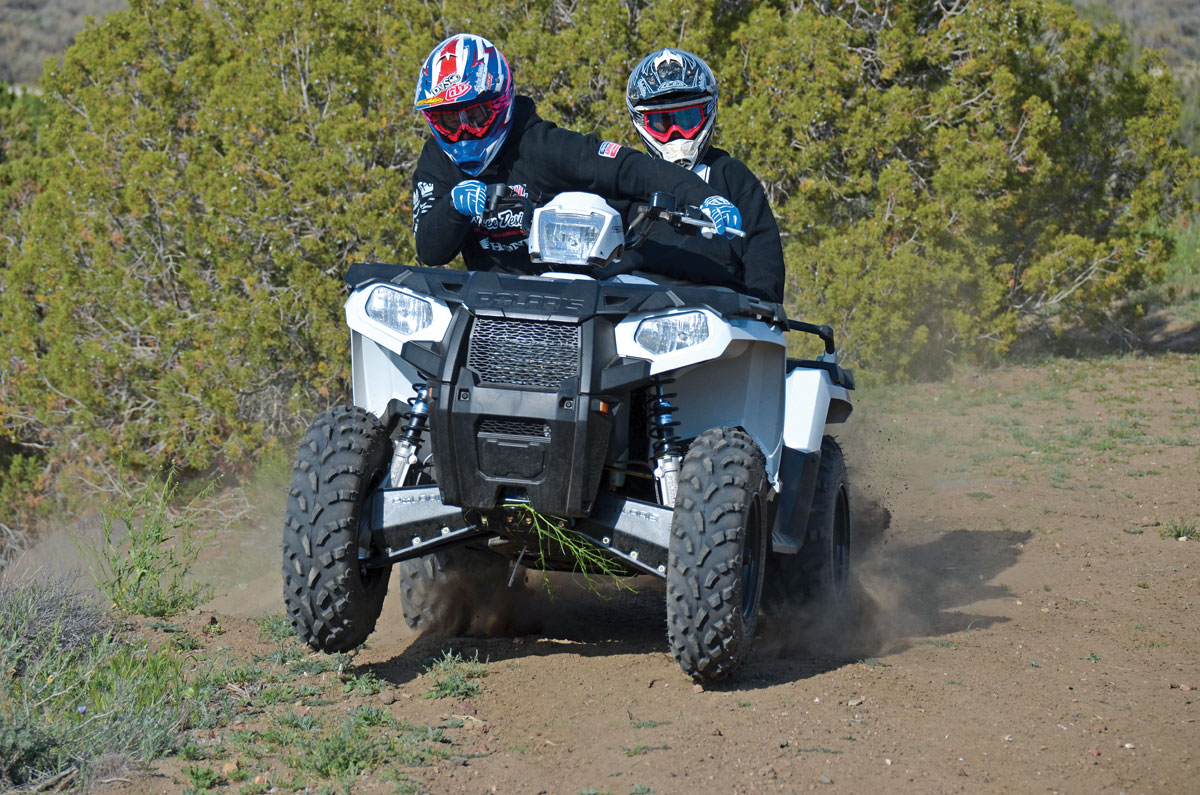 WHAT’S NEW FOR 2014?
Mostly the engine. Compared to the carburetor-fed 500 engine, the ProStar 570 has a modern, DOHC, four-valve head and 42mm EFI throttle body, and it makes 22 percent more horsepower at 44. More compact castings and a CVT cover make the 570 Touring a full 3.25 inches narrower than the 500, and the wheelbase is 3 inches longer than the high-end Sportsman 550’s. The new 570 Touring even weighs less than the Sportsman 550 EPS, but it comes with 25-inch Carlisle 489s instead of the 550’s 26s. Besides the narrower midsection and new engine, the Sportsman Touring is much like the old 500 Touring with MacPherson strut front and IRS dual-A-arm rear suspension. It has a new one-piece seat with a backrest and grab handles for the passenger, plus the engine not only gives the 570 Touring a new personality, it has extra electrical power for running accessories like a winch.

HOW FAST IS THE 570?
Faster than the 500, and maybe the 550. The 567cc engine is potent with its four-valve head, DOHC engine and 42mm EFI throttle body. The ProStar engine has a 99mm piston, but compression is a sedate 9.2:1 and stroke is 73.6mm. It launches with authority and pulls hard, and we could get 50 mph in deep sand with a full load. It’ll do closer to 60 on hard ground and loft the front wheels over water bars and up hills, but power is also very manageable. Being some 170 pounds lighter than the RZR 570 makes it accelerate harder than the UTV as well.

HOW ARE THE CVT AND DELIVERY?
The gold standard! The CVT clutching is smooth yet quick to engage, and it’s tuned well with the EFI so that there are no flat spots and no lag in the delivery. Polaris’ famed 4WD system stays in 2WD until rear wheelspin is detected, then the front diff is engaged automatically. This reduces 4×4 push going into turns and engages 4WD on exit, so the pilot doesn’t have to spend time selecting 2WD or 4WD for each obstacle. The only downside is that the front diff doesn’t engage on steep descents. Any engine braking goes only to the rear tires, which tends to slew sideways on uneven terrain, so you have to apply more brakes to correct. The systems are awesome, as long as you’re into the throttle, but not so much on braking.

HOW DOES IT HANDLE?
Like it can read your mind. The 570 Touring turns in easily and carves corners like it’s on rails. The 56-inch wheelbase provides more straight-line stability than the one-up Sportsman 570. The 5.5-inch-longer wheelbase does slow tight turns a bit and adds to the turning radius, but the Touring still drifts and slides with abandon and predictability and has good berm-shot manners. The extra wheelbase also helps smooth the ride in choppy terrain, and the raised rear foot platforms make water wheelies more fun and controllable, should you be a mud bogger. It’s a great platform for two-up or fast one-up riding, and steering is so light that there is no need for EPS.

WHAT ABOUT THE SUSPENSION?
Excellent. Although the MacPherson strut front end remains from the good old days of the 500, it still works well, and Polaris did a great job of tuning spring and damping rates on the struts and rear shocks. Front travel is only 8.2 inches (the 550 has 9) and rear travel is 9.5 inches (the 550 has 10.25), but both ends are tuned to provide plush action over the small stuff while firming up for big hits. Both ends will bottom if pushed hard over undulating terrain or driven into a water bar too hard. Ride quality is excellent, especially with two aboard.

IS IT A MUD MONSTER?
It wades through the deep stuff like Godzilla does Tokyo neighborhoods. First off, the transmission and CVT were originally designed for a heavier vehicle with more stresses. The 570 Touring has a large sealed airbox with a paper filter and pre-filter, and it draws air from under the gas tank cover, as does the CVT. The CVT cover is well sealed and has a handy drain, and the CVs are protected by huge guards on the A-arms. Ground clearance is 11 inches, and the 570 engine has more power to turn taller tires than the OEM 25-inch Carlisles. Fenders and floor boards also protect the pilot and passenger from splashes too.

DOES IT ROCK IN ROCKS?
Like Eddie van Halen. Although the stout rear torsion bar fights body roll in turns, it does allow articulation for rock gardens, and the IRS rear end helps it stay hooked up and driving. It has full undercarriage protection and 11 inches of clearance. It slap steers well in rock fields, but EPS would reduce effort and all but eliminate terrain impact to the steering stem. The passenger hand-holds and seat backrest provide a stable ride in rocks too.

WHAT ABOUT CREATURE COMFORTS?
They’re all there—almost. Ergonomics for the pilot and passenger are excellent, and the new engine and CVT allow the midsection to be 3.25 inches narrower where the thighs grip the plastic. The stepped seat is awesome for two- or one-up riding, and the backrest is very comfortable. Engine vibration, heat and noise are minimal, and the exhaust note is pleasant. There are latched storage bins under the front rack and behind the machine, but there are no drink holders.

HOW ABOUT THE BRAKES?
They’re strong but could be better. Whether you apply the brake pedal or the left-handlebar lever, all four hydraulic-disc brakes are controlled equally. Polaris does this for simplicity and ease of use, but separate front and rear systems would provide more braking power with less pressure needed at the controls, and you could have more control for advanced maneuvers. As is, it takes major hand strength to whoa the giddy-up, especially on hills, and pull it in enough to engage the parking-brake lock. Park in the transmission is nice, although the 550’s EBS and ADC would be better.

WHAT’S OUR FINAL ANSWER?
The Sportsman 570 Touring is like having lobster and filet mignon at a fast-food price. The ProStar EFI engine breathes fire into the value-menu line, as the new 570 Touring performs on a level with the 550 Touring and X2 in most categories (except steering ease via EPS), and those machines are $1600 and $2000 more, respectively. It does everything well and has great suspension, handling, ride quality and trail comfort. It’s a great machine for exploring the backcountry with a family member or friend and for getting radical or muddy alone. Polaris does offer the one-up Sportsman 570 with EPS this year ($7299), so maybe it’ll transfer to the Touring in 2015 or show up on a value LE.