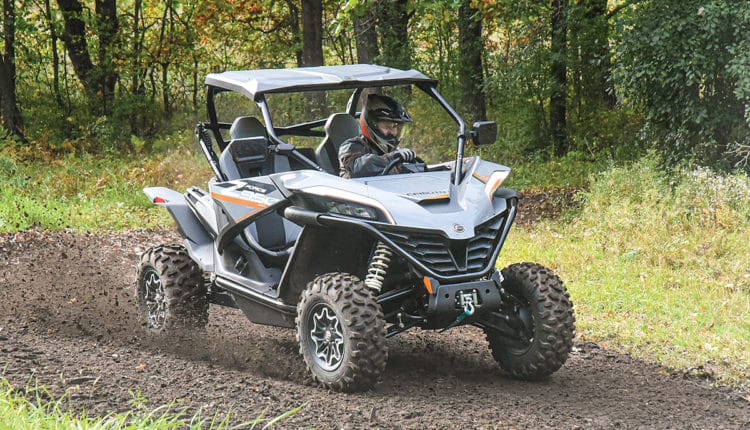 The 2021 CFMoto ZForce 950 is a viable candidate for the sport UTV buyer, and it uses the same engine as the 2020 UForce 1000 utility machine we tested in our September 2020 issue. While the power delivery was a bit much for a utility machine, it’s at home in the 950 Sport, which has Sport and Eco power modes. The 950 Sport also has a first for CFMoto, an all-new Quadra-Link rear trailing-arm suspension system with piggyback shocks, featuring dual-speed compression adjusters plus rebound. We got a chance to test the 2021 CFMoto ZForce 950 at ERX Motorsports Park in Elk River, Minnesota, and to check out the CFMoto facility in Plymouth. 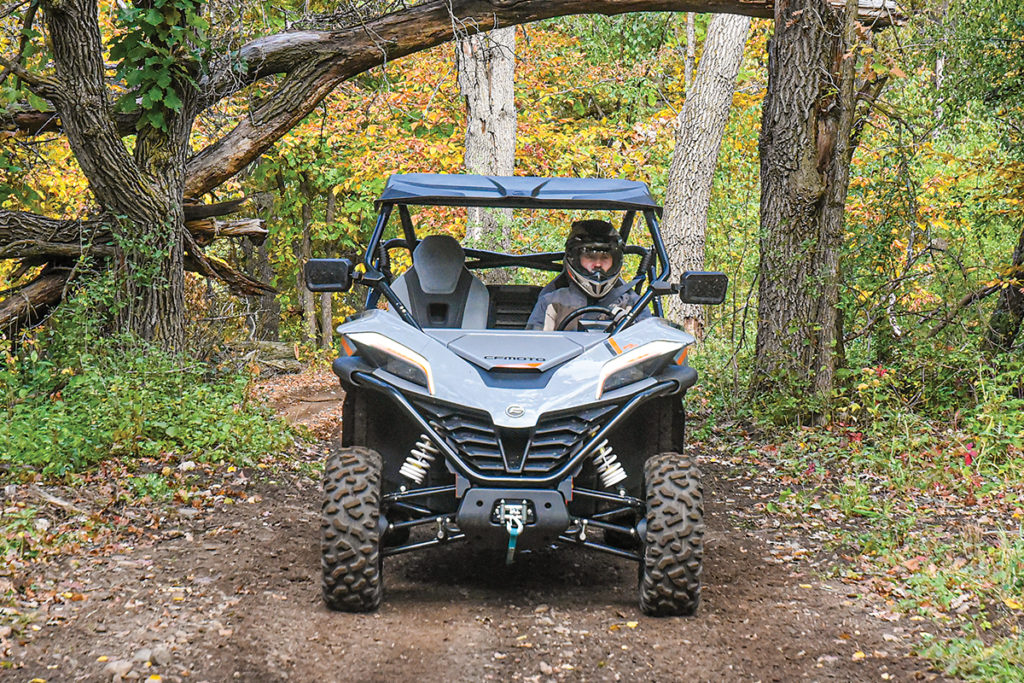 CFMoto has been importing UTVs and ATVs into Canada and the U.S. from overseas for two decades and building motorcycles and scooters for the world market since 1989. According to the company, they hold over 50 percent of the market share for ATV sales in Europe. Their wheelers have high-end accessories for a price less than most manufacturers’ base-model machines. The brand is very well known in Canada and getting popular in the USA as well. CFMoto also builds engines for some KTM motorcycles. All CFMoto UTVs come with a one-year warranty.

WHAT POWERS THE ZFORCE 950?

It is powered by a V-twin engine nearly identical to Can-Am’s V-twin that powers its big-bore ATVs, Defenders and Mavericks. The CFMoto powerplant has single cams, four valves per cylinder, puts out 79 horsepower and has a top speed of 70 mph in High. The 963cc engine has 10.6:1 compression and Bosch EFI, and we hit the rev limiter at 32 mph in Low. The 950 Sport has spacey-looking cones jutting behind the cabin, and the right-side cone is the engine intake with frog-skin covering.

HOW IS THE POWER DELIVERY?

It’s pretty stout, with a lot of yank in Sport mode and smoother delivery in Eco mode. ERX Park has really cool trails with lots of hills and turns, and the 950 Sport’s motor made it really fun. We did laps in Sport mode and were impressed with the ability to power out of drifts, then we switched to Eco mode and liked the lap-time smoothness better. This engine package reminds of us of the base Maverick Sport 1000’s 75-horsepower engine performance.

HOW DOES THE CVT WORK?

The CVTech CVT is tuned pretty aggressively, so it engages quickly and hard, which might be a little much for rock crawling or very slick situations. It’s great for hard launches and general sport driving, and the range selector is pretty slick. There is a button you have to depress to shift, so it won’t be accidentally knocked out of gear, and the selector has a Park mode backed up by a parking brake. The 950 Sport also has a locking front diff controlled by a handy three-way toggle on the dash.

WHAT KIND OF SUSPENSION DOES IT HAVE?

A unique, four-link trailing-arm setup in back alters toe during travel. Otherwise, it’s much like a Polaris RZR 1000, but the trailing arms are very long. Travel is only 11.8 inches in back, but the CFMoto piggyback shocks have separate high- and low-speed compression adjusters plus rebound. The shock spring and damping rates worked well at ERX Park. Arched front A-arms and high-end shocks deliver 11 inches of front travel, but the front shocks only have single springs, while the longer rears have dual-rate springs but no adjustable cross-overs. We would like some more travel for more wide-open western conditions.

HOW DOES THE SPORT HANDLE?

Handling is agile and predictable in eastern woods. The 90-inch wheelbase is on par with that of an RZR XP, and the car rotates well in turns. Front and rear torsion bars fight body roll, and the front bar is particularly stiff. ERX’s trails have a lot of off-camber corners, and the 950 wasn’t fazed a bit. It drifts in and powers out of turns predictably, no doubt aided by the lack of travel, and the 27-inch CST Stags are a short-course favorite with racers on loose soil.

HOW STRONG ARE THE SPORT’S BRAKES?

Pretty strong! Although the calipers are single-piston, they are larger in diameter than most. The non-perforated rotors could be an issue in muddy conditions, but we had no trouble stopping for tight turns, even with a downhill approach.

HOW ARE CABIN COMFORT AND THE DETAILS?

Good and really good. The seats are really comfortable and secure with deep side bolsters and bottom pockets. The Ultra Silver 950 has two-tone covers. The others have single-tone covers, and all have gripper material. The over-molded steering wheel and passenger grab bar are nice and comfortable; however, taller drivers are cramped by the outside dead-pedal, forcing the left knee into the door or tilt-wheel support. The lined quarter doors have a handy release button and grab bar, and the dash is sculpted and spacey-looking. The 950 has toggles for ignition cutoff, hazard lights, hi-lo lights, a horn, 2WD/4WD/diff-lock, and Sport/Eco power mode. Below are 12-volt and USB ports, and there are three blanks for accessories. There are two cup holders, a center-console bin and a smallish glove box. A hard roof is standard.

Out back, the minimalist bed reminds us of a Pioneer 500, but it has bed-complete rails with tie-down points. There are 12 mounting points in the bed for accessories, including a large cargo box. LED taillights and headlights are nice, and the front has LED eyebrow highlights for safety when the headlights are off. The dual-outlet exhaust sounds meaty. Front and rear CV guards are a nice touch, and the standard 3,500-pound winch has a plastic protector, remote port in the glove box and a wireless remote.

We’re impressed with the new ZForce 950 Sport, especially its engine package. While not as powerful as the RZR XP 1000, the 950 makes good turn-to-turn power with the option of Sport or more linear Eco delivery. Combine the engine with a nimble handling package, and the 950 Sport is a great woods weapon. Top speed is 70 mph, but the suspension will likely hold the 950 Sport back in more wide-open terrain. We would like a bit more travel or a lower MSRP. The $12,999 950 Sport is $1,000 more than the UForce 1000, mostly because of the highly adjustable piggyback shocks and new suspension design. 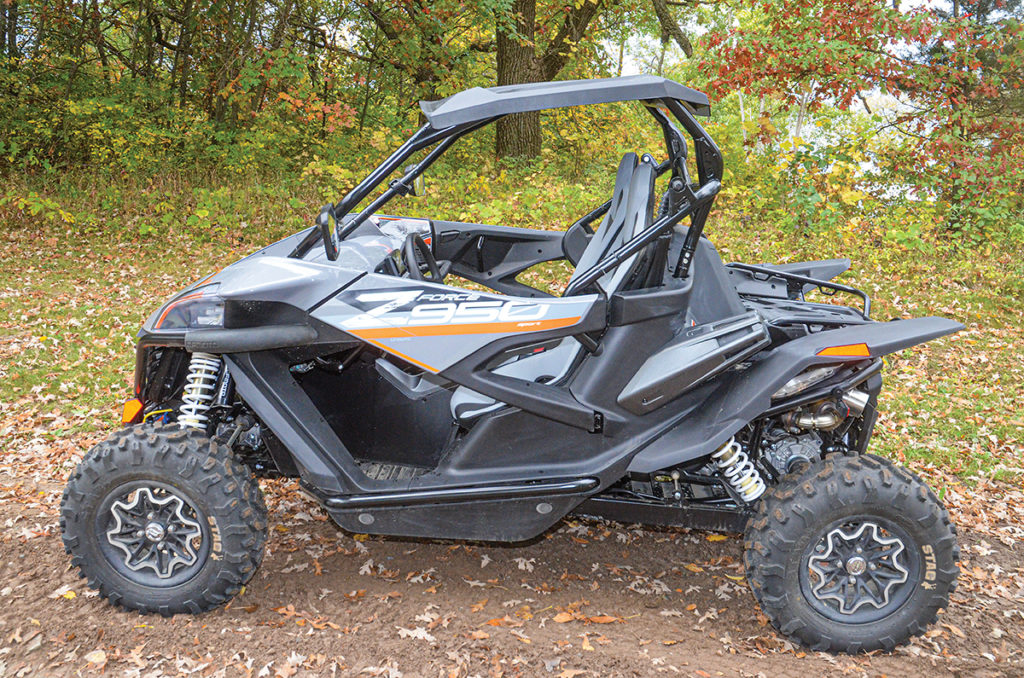