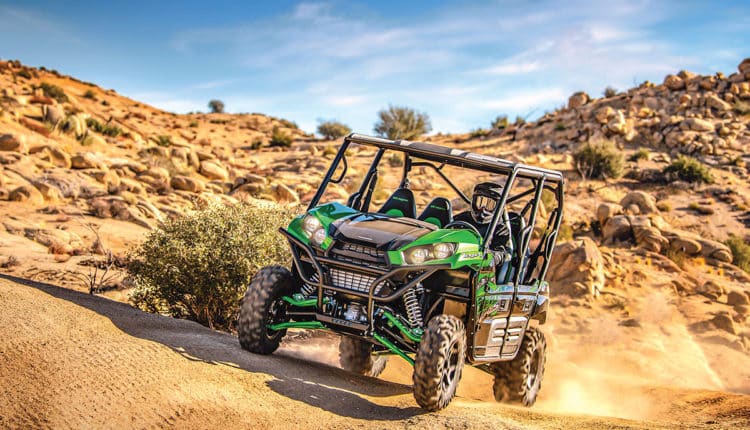 The 2021 Kawasaki KRX eS and Teryx/T4 S recreation machines are the latest new models with upgraded performance. Polaris upgraded the General with better suspension, then Yamaha quickly punched back by introducing the Wolverine RMAX, and now Kawasaki has something new. Kawasaki’s Teryx 800 has alway been a contender in this fight, and for 2021 they hope to stay relevant by upgrading the original Teryx two- and four-seaters.

To the naked eye, the changes on the new limited-edition S platform are subtle. What Kawasaki did was try to improve the ride quality and left the body and cabin alone. That’s fine by us, as we have never complained about it, either. The seats especially are some of the best in the business.

On both of the Teryx two- and four-seaters, $15,699 and $17,699 respectively, the new designation will include the “S.” Sort of like what Polaris does with their S-models, it means more travel and a wider width. To do this, Kawasaki extended the A-arms, and the front shocks have larger bodies matching the 2-inch-diameter shock bodies mounted in the rear. The longer shock stroke translates to increased wheel travel, with the front increasing from 8 to 10.7 inches of wheel travel and the rear increasing from 8.3 to 10.0 inches.

The longer A-arms feature a design with more pronounced curvature, meaning more overall ground clearance, and it extended the wheelbase from 85.8 inches to 88.2. The Teryx S LE and Teryx 4 S LE also feature revised suspension settings, offering improved stroke action and a more comfortable ride. Both front and rear shocks are adjustable for compression damping, as well as preload.

Again, following suit with Polaris, Yamaha, Honda and Can-Am, Kawasaki is now the latest manufacturer to add electronically adjustable shocks to their flagship sport UTV, the Teryx KRX1000 eS  that’s priced at $24,399. The “eS” designation simply means electronic shocks. So, on all four corners, you will now find the same Fox shocks as before but with a small electronic solenoid in place of the compression adjuster. Now, from inside the cockpit, you can reach forward to a switch on the dash to increase the stiffness of all four shocks at the same time on the fly. That’s not all. A six-axis control unit reads data, like wheel speed, throttle position, gear selection and steering angle to constantly adjust the suspension, giving you a much better ride than before. Boy, we wish we had this set up when we drove the KRX 1100 miles from Ensenada to Cabo San Lucas in Baja, California, earlier this year. Several times on the trip we were in sections with lots of whoops, and it would have been nice to make the suspension change on the fly. It’s not a hassle to stop and get out of the car to make the change with the standard KRX, but during our 200-mile days, the terrain changed so often, the switch and eS suspension would have come in very handy.

As for the rest of the new Teryx eS, the only other change is a new digital gauge cluster in front of the steering wheel. You get the same info as before, like mph, CVT belt temp, water temp, fuel levels, gear selection and miles driven, but now you can see what the shocks are doing as well. Toggle over to the shock screen and you can see what stiffness the shocks are set at among other things. There are also now screens for controlling audio and cameras if you have those options installed. As for the look of the eS model, you can tell it apart from the rest by its new red-and-black color scheme. As soon as we get in the driver’s seat of the KRX eS model and the new Teryx S, we will report back, so stay tuned.