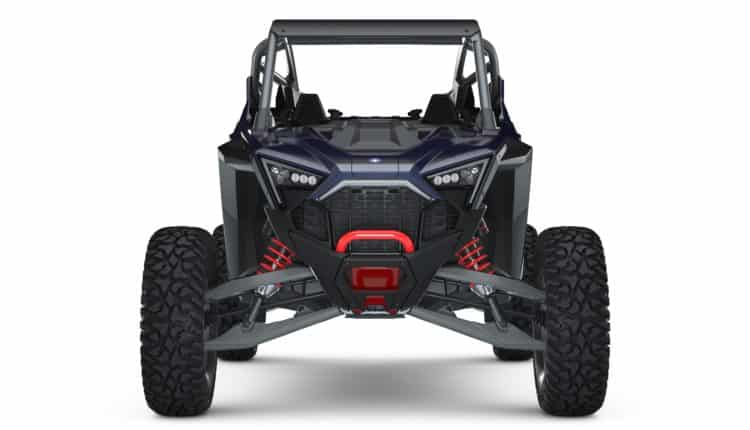 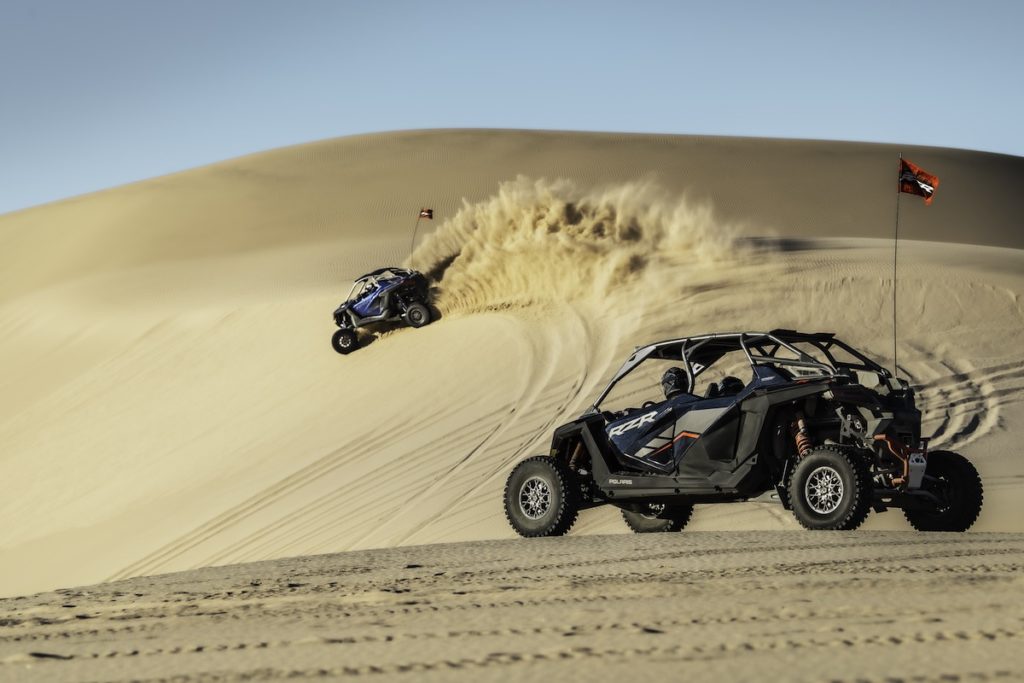 When Polaris first started modifying the original RZR, they gave it an “S” designation. Soon after, the letters XP appeared. Actually XP was used earlier on the Ranger when Polaris was going after the first Yamaha Rhino. More recently, the moniker Pro XP came on the scene and the “S” actually wasn’t associated with this new platform neither was a wider “long Travel” version of the RZR Pro XP and we wondered. Well, now the letter of the day is “R” and it will be a part of two new models; the 2022 Polaris RZR Pro R and the 2022 Polaris RZR Turbo R. These vehicles are available in two and four seat version as well as three trim packages; Sport, Premium and Ultimate. 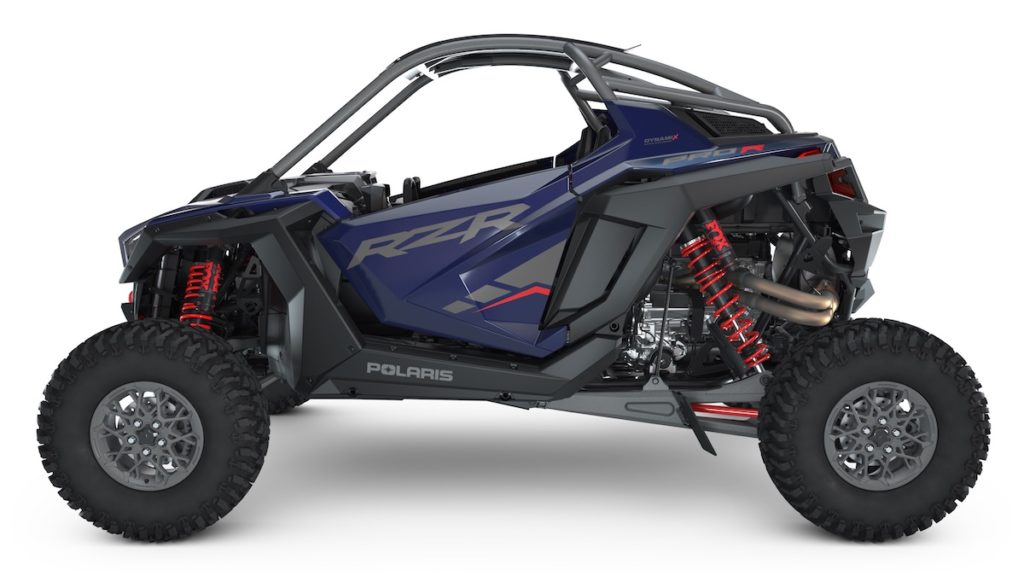 Airfoil A-arms, Toe link out back 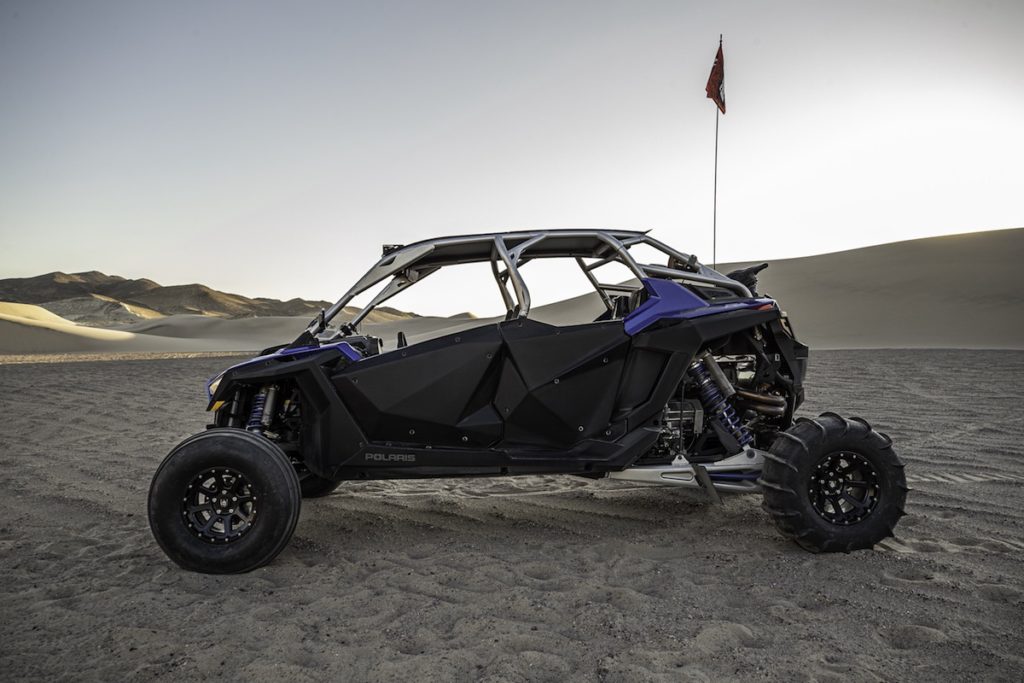 The new car features a 1997cc, Polaris Prostar, DOHC, inline four cylinder powerplant with 225 horsepower.  Polaris says, the powerplant will be more durable and run cooler than their turbocharged twin. You will be able to choose between three throttle modes on this machine depending on how spirited of a ride you want. They are calling the modes Sport, Rock & Race. The engine is very similar to the powerplant found in the Slingshot roadster. That car is available with 178 or 203 horsepower. What is also noteworthy, the Slingshot is available with a manual or automatic transmission. A company called Slingmods already sells turbo and supercharger kits that approach 300 HP so there is a lot of potential at hand with this new mill. The Pro R does not have a manual transmission option yet.

We reached out to the Recreational Off Highway Vehicle Association ROHVA and they could not comment on the fact this machine is over 1000cc and doesn’t fall in line with guidelines manufacturers have been following. We suspect, the Pro R will be titled as a Sand Car or Dune Buggy instead of a ROV.

This new Polaris ProStar RZR power plant will be equipped with 1700W Alternator. While we haven’t driven the Pro R yet, we have heard it run and it sounds very similar to the 925cc Turbo motor that they have been using. Power gets transferred out to all four corners via transverse mounted CVT system located behind the seats and firewall. This set up is similar to the old Polaris RZR 800. However this time, Polaris made the seats easy to remove and the CVT cover can be removed quickly through tool-less fasteners.

Wider, airfoil A-arms attach at the front of the chassis and is a big part of achieving the new 74-inch overall width. The arms hold a 2.5” Walker Evans’ or a massive 3” Fox depending on the package you choose. The Walker’s are 16-position compression adjustable and the Fox’s are equipped with internal bypass ports controlled by Live Valve technology for compression and rebound. The Live Valve, E-shocks have three modes to choose from , Comfort, Rock, Track or Baja. Wheel travel up front measures 22.25, 3 inches more than the old Turbo S. New automotive stye, unitized hubs and five lug wheels will spin a 32X10-15, 8-ply Maxxis Fury tire on all four corners. The hub design should let you run the car with an axle removed if needed. The 5/115 bolt pattern is similar to many Chevrolet street cars and small trucks.  Slowing everything down is a new 3-piston front caliper. The back will still use dual piston calipers.

On that rear end, longer trailing arms bring the wheelbase to 104.5 on the two seat models and to 133-inches on the 4-seaters. This new number is 2-inches longer than the Can-Am X3 two seater and 2-inches shorter than the X3 Max. Wheel travel numbers are set at 24.5” and all versions of this new chassis get 3” coil shocks out back. Fox Live Valves on the Ultimate models and Walker Evans on the others.

You will also notice a red toe link, that should help keep the rear tire from changing toe angles throughout their travel motion and force the car to drive much straighter than the Pro XP. Mud flaps are standard equipment as well which is another first for a production UTV. The extended wheelbase on this machine is not due to the new suspension. The frame at the back of the car has been stretch to accommodate the larger motor and transverse mounted CVT system.  The engine and extra frame material adds 200 pounds to the package. The new suspension, and drivetrain either “R” adds 150 pounds when compared to the narrow Pro XP.

Airfoil A-arms, Toe link out back 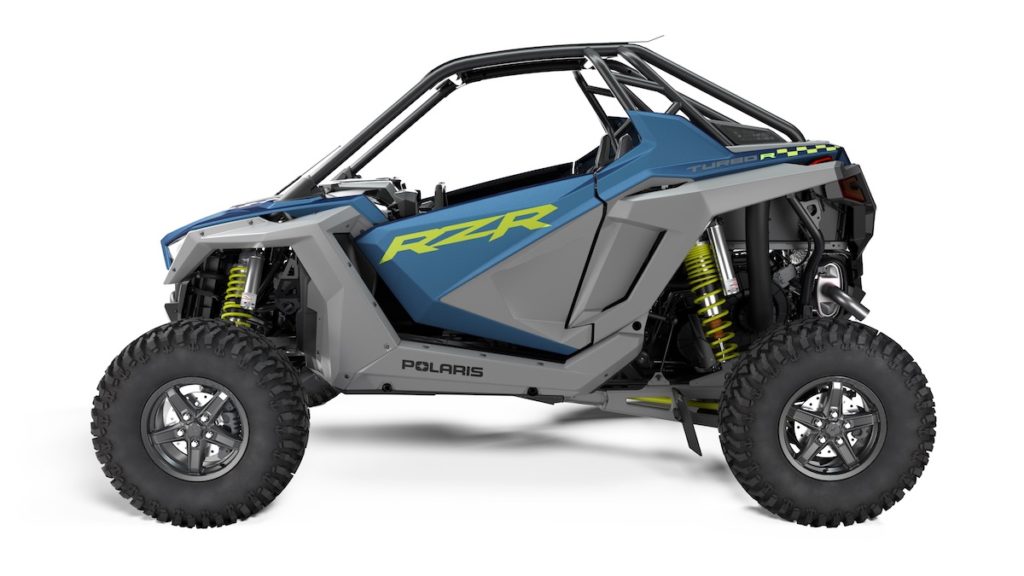 This is the replacement for the Turbo S. It’s two inches wider, has 3 more inches of front wheel travel and 4 more in the back. Like the Pro R, this car has new airfoil A-arms with the shock mounted to the lower one. The trailing arm has a toe link to keep the 32-inch tires pointing straight as they move up and down. The new Maxxis tires have a similar pattern to ITP Coyote’s that were found on the Turbo S, however these have a more rounded edge which is something we had wished for. The new chassis has 16-inches of ground clearance, a big improvement from the narrower Pro XP.

We calculated the power to weight ratio to be nearly identical between this machine and the four cylinder Pro R. They both have to push 9-10 pounds with each horsepower.