Room for the entire family

What has two more seats, is 2 feet longer, 5 inches taller and less than 200 pounds heavier than the original Kawasaki KRX1000? The answer is the all-new 2023 Kawasaki Teryx KRX4 1000 family wagon.

For long-wheelbase competition with four seats and a naturally aspirated engine, you have the Polaris RZR 4, the Honda Talon 4X and two Can-Ams, the Maverick Sport Max and new Commander Max. All four are narrower and have slightly less horsepower but are much lighter. The Honda Talon X4 starts at $5000 less, but it’s a narrower car with less travel. The Polaris is $2000 less and again narrower with slightly less travel. The two more compact Commander and Maverick Sports from Can-Am have less travel and use A-arm suspension like a Polaris General ($29,599). They start at just over $20K; however, those last three mentioned more closely compare to the Kawasaki Teryx S, which also sells for right around $20,000.

WHAT POWERS THE KRX4?

The same compact, twin-cylinder, normally aspirated mill that is found in the first-generation KRXs. It has 112 horsepower and a 70-mph top speed. Acceleration feels nearly identical to that of the two-seater. Kawasaki achieved this by ditching the heavier beadlock wheels for non-beadlock versions, reducing rotating mass. The four-seater is less than 200 pounds heavier than the two-seater, so it’s like having an extra guy on board when you drive the KRX4. It has more than enough power to get down a trail at a decent clip and have a good time. It works decent in sand, but this is not the vehicle we would recommend for the dunes. It will be fine everywhere else. Our test drive took place with three occupants on board. In slow, technical terrain, we didn’t find the need to use low gear more than normal, but when we did, it helped.

WHAT ABOUT THE CVT?

According to Kawasaki, nothing in the CVT system has been changed. The weight and springs are the same as on the two-seater. They did make a part-number change last year, and we believe it was because stronger material was used on the clutch weights, as those have been known to wear out prematurely. Response and acceleration seem to match what the two-seater put out.

HOW DOES THE BIG 4-SEATER HANDLE?

In our initial test, it seems that the springs are set a tad stiff to keep the ride height up; however, if you’ve paid close attention to our tests of the two-seater, the springs take a set after about 700 miles. We were only able to put 25 miles on the KRX4 so far, so we haven’t seen this happen yet. If you were to put a two-seat KRX back to back with a KRX4, the four-seat is about 1.5–2 inches taller, even though the specs claim the ground clearance is nearly the same at around 15 inches.

On the trail, the vehicle doesn’t seem too big. It corners well, and the rear end doesn’t hit things unexpectedly. Steering is light, although the front end seemed to push some on the sand trails where we tested. The Maxxis Carnivore tires are more suited for hardpack or loamy terrain. Kawasaki says the brakes are unchanged on this heavier four-seater. They worked fine, but we have found a sintered brake pad from someone like DP Brakes will improve the overall stopping power.

Our two test vehicles were the eS models, so we played around with the soft/medium/firm suspension switch a lot. For this particular ride, we liked medium more often, whereas in the two-seater we could leave it in firm, and the internal bypass shocks would be plush at slow speeds and offer great bottom-out protection for more aggressive driving. The vehicle worked awesome in big rolling whoops, and we never felt the suspension or skid plate bottom out.

IS THE COCKPIT COMFORTABLE?

Yes, the front is exactly the same as before. Both riders up front have adjustable seats, great foot positions, and the doors are the perfect height to rest your arm on. The rear passengers also have plenty of leg and shoulder room; however, the seats are not stadium style, so to see out, those back passengers have to lean to the center to look around the front seats. Also, to keep the body lines looking good, the back passenger doors are higher so the view out of them is not as good as it is up front.

In the rear, the seat bases and backs can be removed quickly without tools. There’s a little bit of storage under the right-side rear passenger seat and the driver’s-side front seat. These areas are big enough for a small jack, a tow rope or some tools. You can also remove the seat back on the passenger side in the rear to access the fuses and air filter. You can’t do that with the two-seat model. On the floor, Kawasaki replaced the funky rubber drain-hole covers with twist-lock plastic ones. They will be easier to replace but harder to keep from jiggling loose.

All KRXs come with a few features that are not very common on other brands’ machines. In the cargo area, you can lay a 32-inch tire flat, then put your lighter cargo on top of that. The CVT belt is super strong, and in 3000-plus miles of driving KRXs, we have yet to see one break. Additionally, there is a CVT temperature gauge on the dash, and if you have the ES or LE model, you can see what temperature the belt is at. During our test drive of the KRX4, 160 degrees was the highest we saw, and it was a hot day of over 100 degrees of ambient temperature. The KRX has a true locking front differential if needed.

Kawasaki’s KRX4 1000 is a great option for people who want to take friends along on a comfortable ride. There’s a ton of leg and shoulder room so any sized rider can fit. It’s a vehicle that stays planted on the ground, will crawl over anything and will never leave you stranded. It soaks up big whoops just as well as little choppy bumps. From desert driving to high-mountain fire roads, this would be a great machine to take on that kind of adventure. The only change we would want to make is a change of scenery, so we can ride it on our favorite trails. 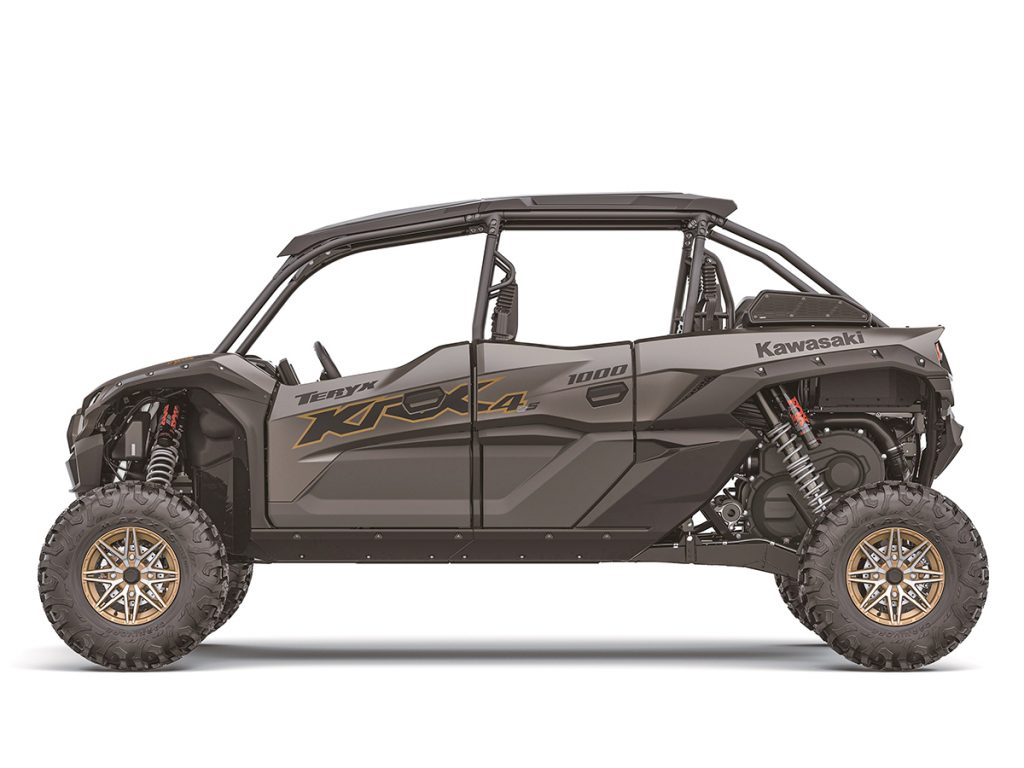