In desert racing, winners follow three Ps to success: One, patience during the race to conserve parts and not make mistakes. It’s not the fastest driver who wins; it’s the team that makes the fewest mistakes. Two, preparation is what you do to get ready in the time between your last race and the next one. Three, practice (or pre-running) is important for keeping your skills sharp and learning the terrain for the upcoming race. Adrian Orellana’s RZR pre-runner is a key part of his racing program. We caught up with the winner of the Mint 400 Pro Non-Turbo UTV class and went on a couple of two-day rides with him to see how he sets up and drives his Polaris RZR Turbo S pre-runner.

Adrian Orellana is as good at marketing as he is at driving. We noticed the way he keeps his car looking fresh and representing his sponsors well. One of his main sponsors, Assault Industries, took notice, too, and has been on board with a full commitment for years. The list of upgrades to the RZR includes a large number of parts from Assault.

THIS RZR WAS ASSAULTED

Starting up front, an Assault HellFire grill replaces the stocker, while a Cognito bumper holds a pair of round KC LED lights. Getting airflow to the radiator and intercooler is mandatory when you’re hundreds of miles away from the chase truck. Back on the A-pillars, Adrian relies on a pair of the ultra-popular Assault B2 Bomber mirrors.

Out back, Assault’s Adventure Rack spare-tire holder also carries a spare Fuel wheel and tire setup and can be lifted up out of the way to access a PRP parts bag resting in the cargo area. Adrian keeps a spare radius rod and heavy-duty ratchet strap under there, too. An Assault Y-strap holds the spare tire in place.

Adrian finishes off the list of components strapped to the rear with a Pro Eagle CO2 jack, a fire extinguisher and a pair of Savage UTV cases. One has a spare belt and the other holds the Savage first-aid kit inside. To top it off, he has a small, lighted Buggy Whip sticking out of the bed.

In the cockpit is where the homework is done. Communications from Rugged Radios are as key as the ability to take notes about the terrain and trail. Adrian relies on an iPad mounted in a Mob Armor case attached to an Assault billet passenger grab bar. During a pre-run, the driver and passenger will discuss the terrain and make notes that will be used on race day. Thanks to the Rugged intercom system and helmet wiring, the conversations are as clear and precise as sitting in a quiet room together, even with the motor running. Those notes include where pit stops are, where dangerous turns or ditches might be, as well as passing lines.

The passengers are held inside PRP seats with padded, four-point PRP harnesses. The fourth seat has been removed, and a cooler has been added in its place. The crew is protected from above by a Cognito cage with an accessory roof rack that also holds a large RotopaX gas can. 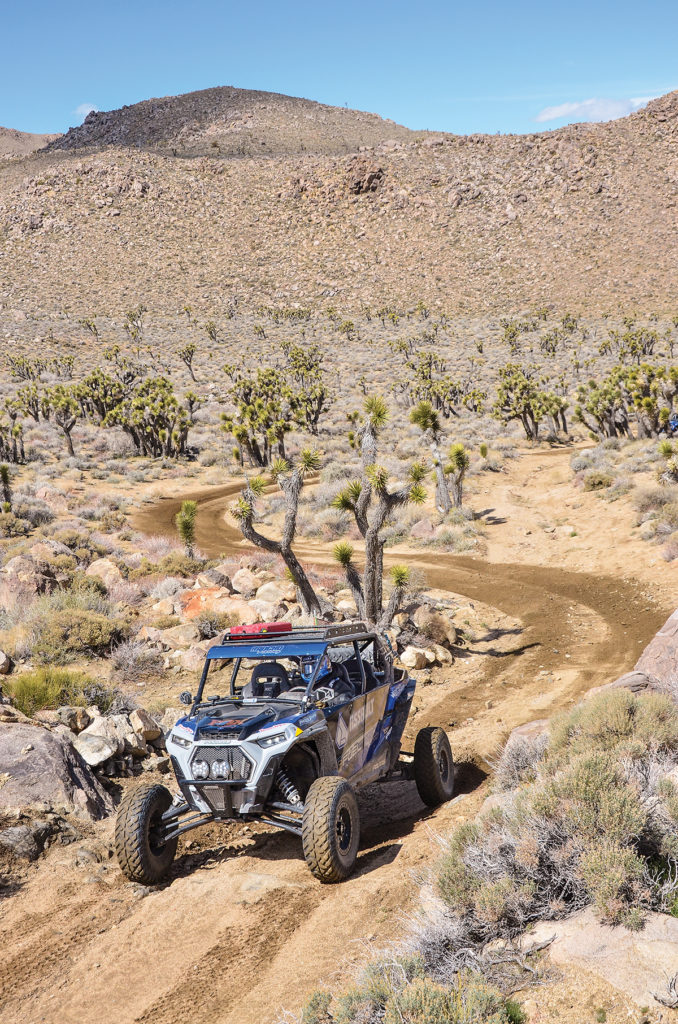 You can get away with a fairly stock car as a pre-runner chassis-wise, especially if it’s the Polaris RZR Turbo S. This car has some of the strongest, long-travel OEM components you can get from any brand. Still,  Adrian Orellana’s RZR pre-runner is upgraded with a set of Assault’s Turret-style rods. This way, one more weak link is taken off the car. The Dynamix electronically adjustable shocks were left in stock trim and so were all of the arms. For a tire and wheel package, Fuel’s 10-ply Gripper meats were wrapped around a set of super-strong Fuel wheels. With this combo, carrying a spare is almost not necessary; however, on this trip, Adrian did end up loaning his spare to someone less prepared. On our second trip, Adrian added a mini Treger pellet stove to the roof rack. Dinner after that day of riding was unique and delicious for sure.

Adrian’s philosophy of adhering to the three Ps and going by the motto KISS (Keep It Simple, Stupid) is paying off. He’s one of the top guys to beat in the Non-Turbo Pro UTV class in both the Best in the Desert and SCORE Baja racing series. He’s admired by many racers and sponsors off the track and feared by all racers on the track. He does his homework while still having a blast enjoying the sport between races—all in a great-working Polaris RZR Turbo S 4. With the same parts from Assault Industries, Fuel Tires and the rest, you can, too. 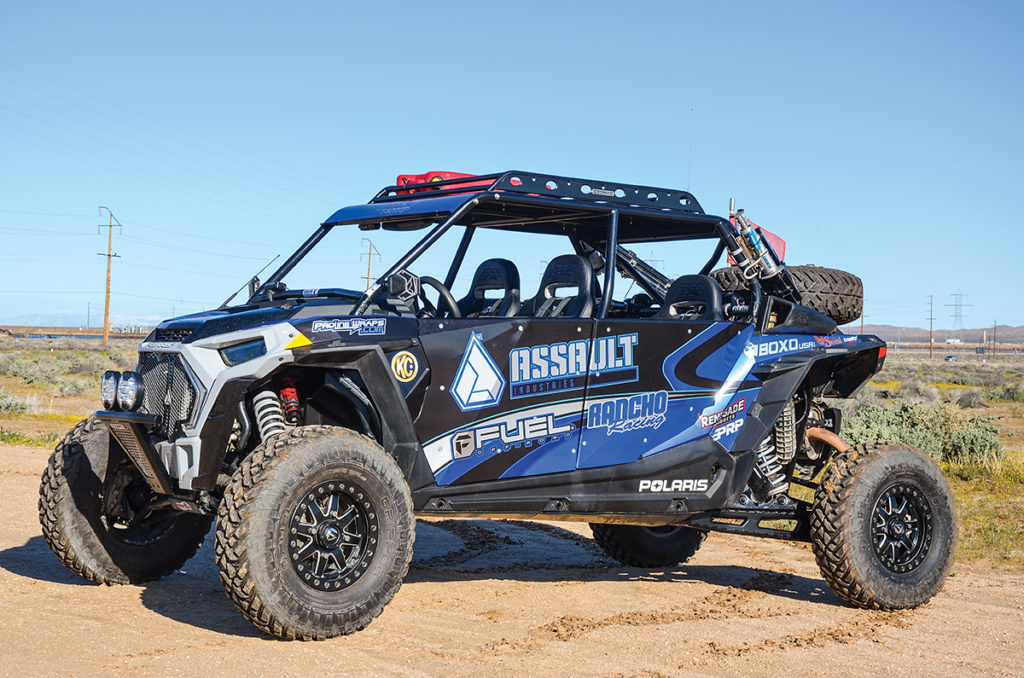