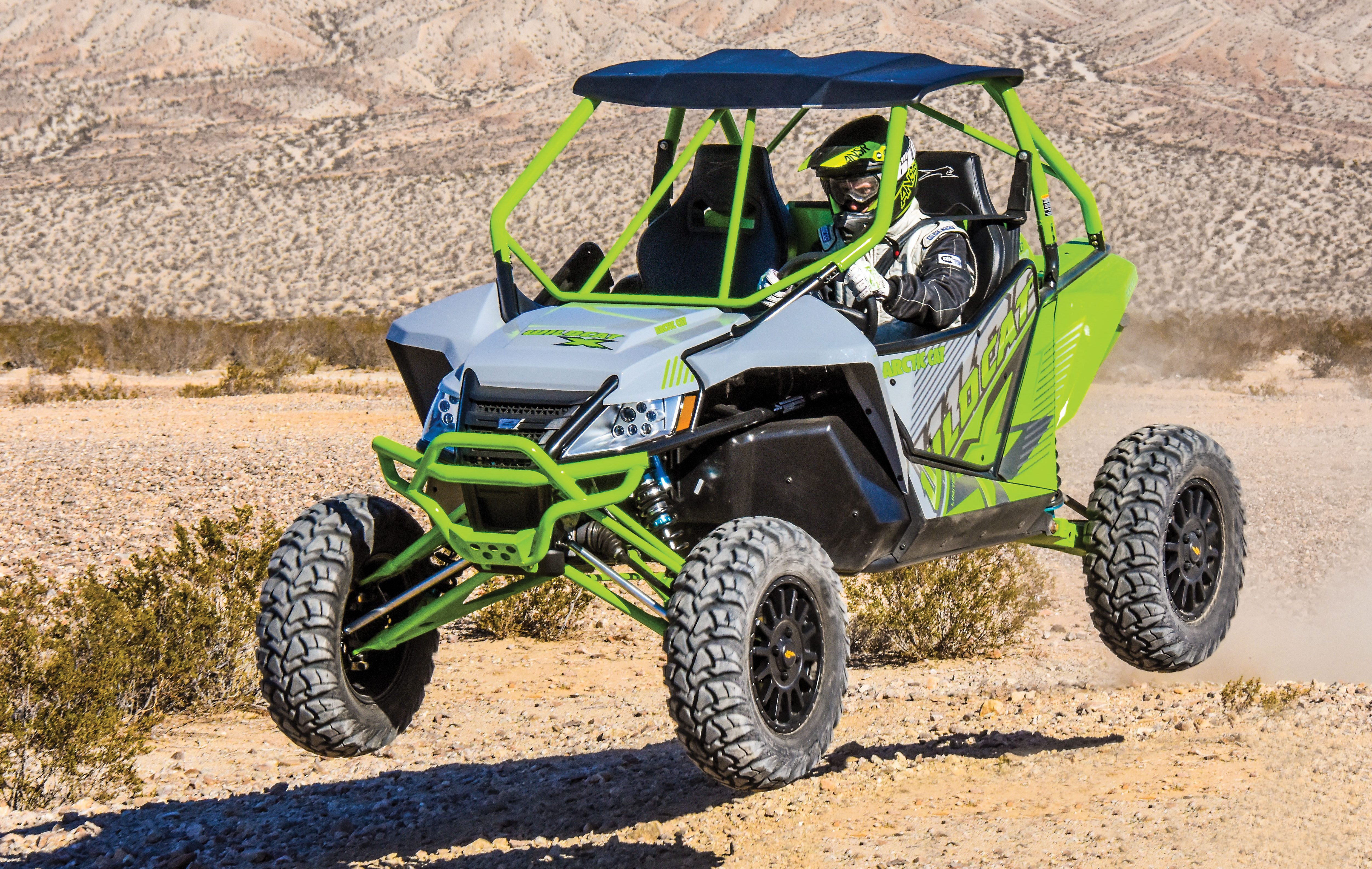 Arctic Cat started the extreme-performance UTV suspension wars with the 2012 Wildcat 1000 and made a few upgrades in power, clutching and fitment in 2013 through 2015. The price was lowered in 2016 by $1300, with a promise of a $21,499 Robby Gordon Edition with $11,000 in Speed accessories, including 30-inch Arisun Aftershock tires on Raceline beadlock rims, but it never materialized for 2016. For 2017, the Wildcat 1000X is only available with Robby Gordon’s trailing-arm suspension based on his fleet of Stadium Supertruck Wildcats and his Dakar Gordon Hummer. The new Wildcat Xs also get tire, rim, cage, tie-rod and CV upgrades.

Arctic Cat dropped the base 1000 for 2016, leaving the 1000X and 1000X Limited and Special Editions, both of which sported variable-assist EPS and Elka Stage 5 shocks. For 2017 the SE is dropped, and the Wildcat 1000X EPS and Limited EPS both get the RG Pro Suspension package with Speed-label King Racing shocks with adjustable compression damping and dual-rate springs with adjustable cross-overs. Gordon’s Pro rear suspension is a wishbone trailing arm with no links or tire scrub during travel. Not only that, the trailing arm is manufactured to work on either side of the car, easing racing costs.  Rear travel decreases 1.5 inches to 16.5 inches, while wheelbase increases to 96.25 inches with the Robby Gordon Pro Suspension.

It’s still 91 horsepower, and we got 70-plus mph out of the 1000X in high and 38 mph in low. While the 1000X is not particularly fast compared to a RZR XP 1000 or YXZ1000R/SS, trail speeds are high due to the well-tuned Robby Gordon suspension. It’s built for going fast in rough terrain, but loses ground as the trail gets twisty and tighter.

HOW IS THE CVT/4WD DELIVERY?

Excellent. The Team Rapid Response clutch lives up to its name by spooling up instantly, so much so that it takes some time getting used to in technical terrain. It leaps out of the hole and makes good use of the V-twin power. The range selector is very slick, but we ended up in between high and low a few times during testing. The 2WD/4WD/diff-lock toggle requires pressure to lock the front diff, and a light on the toggle indicates when the diff locks.

This Wildcat is sure-footed, but it handles a bit slower than the 2016. It has a 1.25-inch-longer wheelbase at 96.25 inches, but the 2017 has more aggressive 27-inch ITP Ultracross tires on 15×7 rims, which is a racer’s setup. The RG Pro Wildcat wants to be drifted into turns for the quickest cornering, as it tends to push at slower speeds in 4WD. Robby Gordon likes a soft suspension setup, which maximizes traction but also results in a lot of body roll. Straight-line stability is excellent, even in the nastiest whoops. There are mounts on the lower A-arms for a front torsion bar, but the Arctic Cat accessory catalog doesn’t list one.

It’s the Wildcat’s strongest feature. We went to California’s Stoddard OHV Area for testing, where the original Wildcat 1000 was introduced, and the RG Pro Wildcat gobbled whoops like a tiger eats antelope. The dual-rate springs provide a pretty smooth ride over rocks and desert chop and also soak up big hits. The King shocks and RG Pro suspension even did a great job on Trophy Truck whoops. Our Kings were adjusted way soft at 18 clicks out on all four corners, and the car was very balanced. We ended up going a bit harder up front with 16 clicks out to keep the front up for huge G-outs and air time over rollers. Faster guys will want to go in further to fight bottoming.

HOW IS IT IN MUD AND ROCKS?

Mud isn’t on the diet, although Arctic Cat has accessory front fenders ($399.95) that attach to the knuckles and rear fender extensions ($169.95). The fenders would need modified mounts for larger tires too. Rocks are a different story, as the RG Pro tackled a few of Sand Hollow’s most difficult rock-crawling trails, and its locking front diff and Ultracross tires are a bonus.

WHAT ABOUT TRAIL COMFORT?

Mostly good, with some rough edges. The aluminum half doors and Limited roof add confidence, and so does the low seating position and nice seats. The tilt steering wheel is comfortable and rigid, but the seats aren’t adjustable—although you can remove them for use around camp. The new RG Pro ROPS cage with front and rear intrusion bars is great, and it will retrofit on all Wildcat 1000s. Noise and vibration in the cabin are tolerable, but the inner frames on the LTD doors bang your knees. We’re not fans of the console passenger hold-point, as it’s very close to the range selector. Overall, ride quality is very good.

HOW ARE THE BRAKES?

Arctic Cat was smart to team up with Robby Gordon for the Wildcat 1000X, and there are two new UTVs coming early this year. With the RG Pro Wildcat X and Limited, Arctic Cat gets back some of the suspension advantage it got with the original Wildcat 1000, and it satisfies all but the most power-hungry UTV enthusiasts. It handles great and is super stable, and ride quality is awesome. The King Racing shocks and RG Pro suspension are well worth the extra $1000 compared to the 2016 Wildcat X, as are the ITP tires, KMC rims and race-inspired cage. We’re sure Arctic Cat has put the Yamaha turbocharged triple from the Thundercat snowmobile in the Wildcat chassis, so expect a new Wildcat with almost double the horsepower of the Wildcat V-twin. 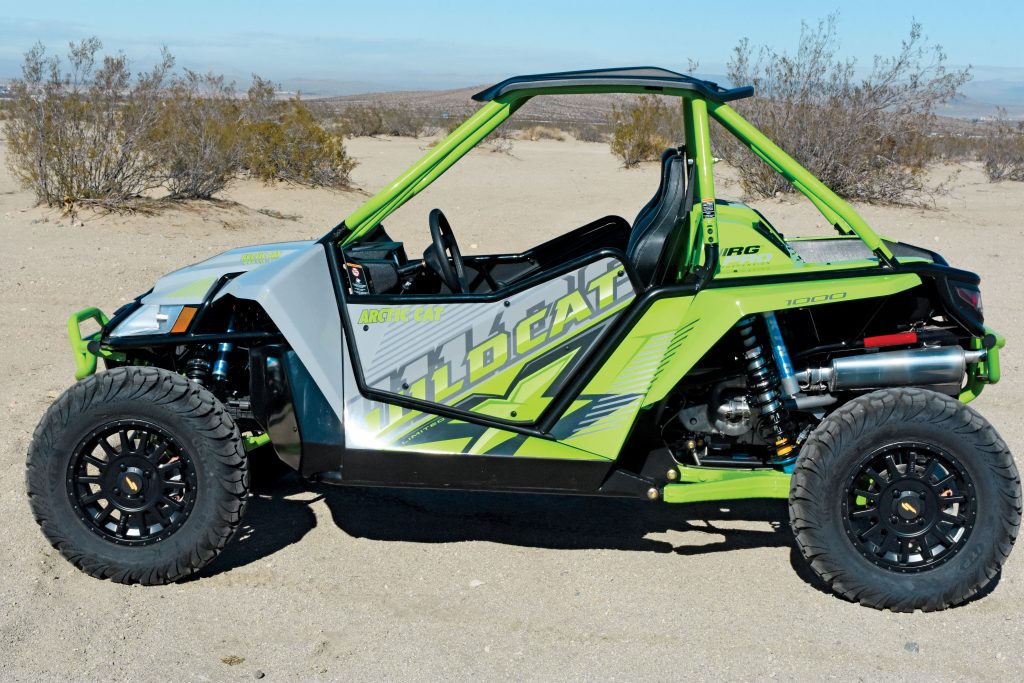 A Guide To UTV Racing