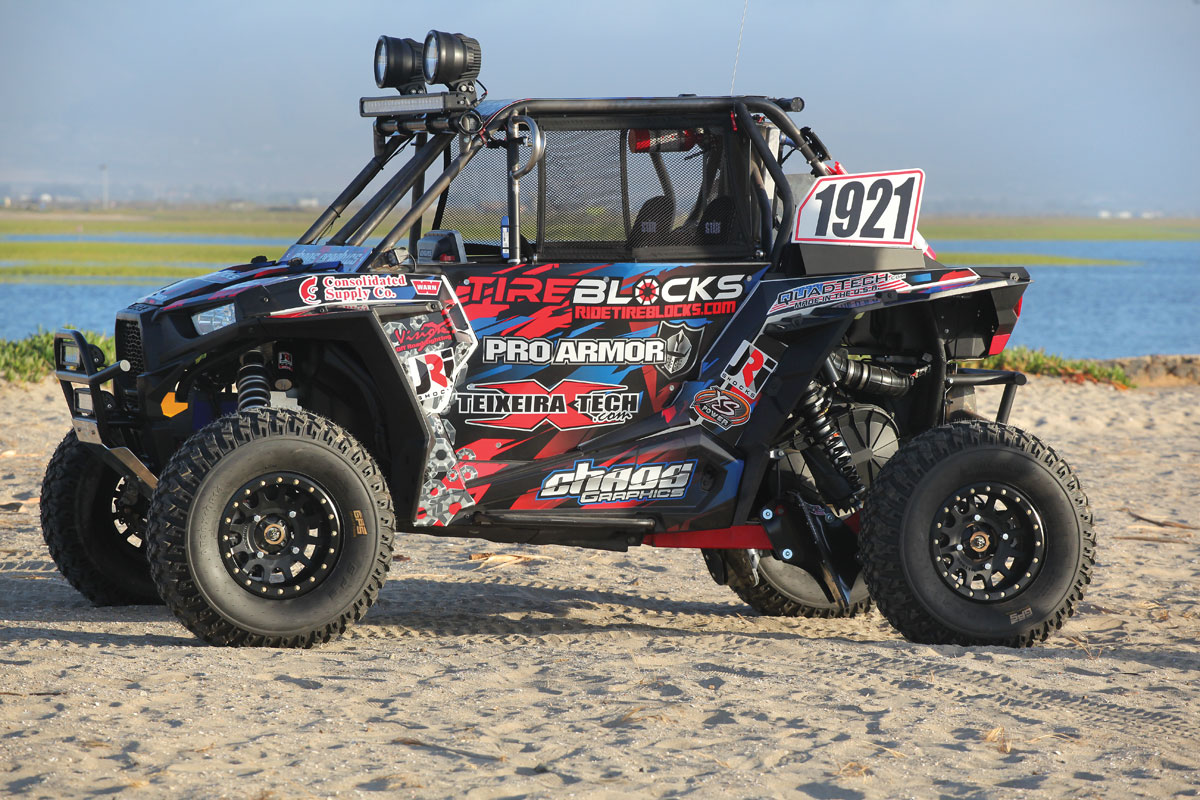 Racing Ensenada’s SCORE Baja 500 is a dream for many, on the bucket list for most and is like some sort of evil drug for those addicted to its mystique. Two wheels or four, handlebars or a steering wheel, it doesn’t really make a difference. It’s about a common goal: to beat the Baja by finishing—and for an elite few, winning.

The steering wheel and cage used to be the major separation between us ATV/motorcycle racers and car/ truck guys. The UTV might just be the melting point in the middle. As quickly as you’ve seen its popularity taking over our industry, it is becoming mainstream and prevalent in racing, and for a lot of the same reasons. Just a few years ago, UTV racing was evolving from hopped-up, custom versions of the very utilitarian Yamaha Rhino and finishing a race like the Baja 500 was not a reality. Fast-forward to the recent 2014 Baja 500 and the UTV class has 17 entries, making it the third-largest class in the entire race. Even more impressive is that nine of them made it to the finish line, bringing the finishing rate to more than 50 percent.

Amazing improvements in machinery by the OEMs, combined with very serious efforts by a bunch of different teams, has led to this success. While it’s by no means a “cheap” way to go racing, if you have been bitten by the Baja bug, the availability of multiple, quality raceworthy UTVs make for a great starting platform, and a cage is definitely the safest way to race in the desert.

The recent OEM interest, involvement and evolution is proving to draw from the car and truck-racing crowd. Availability, affordability and the safety of a roll cage appear to be a major draw on gaining competitors from the bike and ATV crowd. Whatever the draw, UTV racing is making a serious presence in Baja, and it looks like they’re here to stay.

THE MACHINES
The allure of Baja is that anyone can win on a perfect day. But the reality is that it usually requires a perfectly prepped machine, a great driver, support program, teammates, mechanics, logistics and planning. There were plenty of great-looking machines on the starting line, and as with most any Baja race, the bestprepped teams were congratulated with a trip to the finish line.

Eventual winner Marc Burnett has raced Trophy Trucks here in the past, but this year he’s driving the Monster Energy-backed #1904 Can-Am Maverick like a boss, with a win at a the San Felipe 250, a second at the IV 250 and back for a commanding win at the Baja 500. For a little backstory, Marc Burnett’s race Can-Am blew a motor testing his Fox shocks just a day before contingency. They were the last UTV team to tech after working all night swapping motors and fixing issues, and they still managed to come out on top.  The #1913 Lone Star Racing Polaris was driven by Brandon Sims to a solid second place. While everyone had their fair share of issues in this Baja 500, the FOX/LSR-suspended team was the only one really in striking distance of the MB Racing Can-Am as the race got closer to the finish. Sims and the #1913 car were only seven miles behind the leader during the final stretch. Justin Lambert drove the factorybacked #1908 Cognito Motorsports Polaris to a solid third-place finish, more than an hour behind first and second place. The #1908 Cognito car is centered on their suspension, chassis components, FOX shocks and rolls on ITP tires.

I got a last-minute chance to drive the #1921 TireBlocks Polaris with Jamie Kirkpatrick, and it was ready as ever. Coming off a fourth place at San Felipe, the TireBlocks car picked up some new sponsorship with JRI shocks and GPS off-foad products for the Baja 500. Jamie and his dad, Dan, had a great run going, turning a rear start into second-overall UTV by race mile 80. They were held up multiple times by bad placement in the really congested bottlenecks that happened in the second half of their section. The car was actually flawless all the way to the finish, and were it a Baja 1000, we would have had completely different results.

Derek Murray drove the factorybacked#1917 Can-Am Maverick Max to a seventh-place finish about 35 minutes behind us. Apparently they were plagued by the same bottleneck issues and were running behind us for the entire second half of the race. Murray Motorsports was second at San Felipe, won the Imperial Valley, and entered the Baja 500 with the points lead.

Cory Sappington drove the #1904 Desert Toyz Can-Am to eighth, but mid-race issues had him a solid two hours behind the Murray brothers. Alonso Lopez was the last official UTV finisher, just behind Sappington in his awesome Alba-powered GlassKraft XP 900. Alonso had ATV Baja champion Wayne Matlock driving the Mike’s Sky Ranch section for him, but CV issues early on kept them playing catch-up all day and night.

THE FINAL TALLY
Seventeen UTV teams is an incredible statement; nine finishing is even bigger. The machines are getting better and better by the day, and the UTV class will only be getting stronger and faster. With the new ownership, rule changes and added costs, the ATV Pro class at Baja is suffering. There was still a solid showing of sportsman-based teams, but Dofo Arellano and Javier Robles were the only two teams on the Pro ATV roster for this year’s 500. Arellano bested MCR’s Javier Robles team by two minutes after a solid battle all day long. The MCR/Robles team still has a solid points lead due to Arellano’s DNF at the IV 250.

WIN A YAMAHA UTV OR ATV

WHERE TO RIDE & RACE YOUR UTV: WV DIRT DAYS