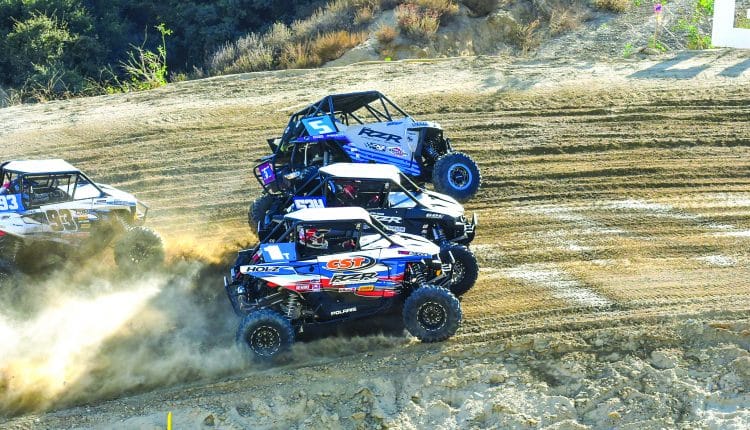 Round six of the World Off-Road Championship Series (WORCS) was hosted by Glen Helen Raceway in Southern California. The course was fast and rough with lots of jumps. Using much of the Glen Helen Motocross National track and REM/Vet MX track, the WORCS course also used much of the Lucas Oil Off-Road short-course, dirt parking lots, and a sand-wash woods section. Add the brutal heat, and the Glen Helen WORCS round waged a war of attrition on the UTV and ATV racers. This was the first UTV round since the summer break, and the racing was as hot and heavy as the weather and course.

Pro Stock 1000 UTVs: The Pro Stock 1000’s first wave headed into the Talladega first turn four abreast, until Matt Hancock and Shelby Anderson locked wheels and Anderson did a 55-mph bicycle. Beau Baron had the inside line and took the lead over Corbin Leaverton. Baron gapped the field on the first lap, but Leaverton put on a charge and took the lead on the second lap. While Leaverton and Baron ran 1-2 in their RS1s, Ronnie Anderson and Cody Bradbury moved up from sixth and seventh and battled as they worked past Davi Haagsma, Hancock, and Shelby Anderson.

Bradbury turned the fastest lap of the race on lap five, a 07:43.129, after getting past Ronnie Anderson for third. Polaris RS1s took the top six positions, with Leaverton scoring his third win of the season and stretching his Pro Stock UTV points lead to 24 over Baron. Shelby Anderson moved up to third but had a bad fourth lap and dropped to sixth. She was eventually lapped by Leaverton. Only 11 of 16 Pro Stocks finished all seven laps of the one-hour race, with Polaris RZRs taking the top eight spots.

Pro Turbo UTVs: Again, the high-speed start and Talladega first turn took its toll during the Pro Turbo UTV start, as Hunter Miller (C-A) pinched off brother Cody, who dropped to fourth as Hunter took the lead ahead of Bradbury and Matt Hancock. Baron, in a normally aspirated RZR RS1, was fifth, and it took him three laps to catch the lead pack. Bradbury took the lead on the second lap and turned the fastest lap of the race on lap five, a 07:27.370. He was then penalized for speeding through the scoring chute and had a bad sixth lap, dropping him to eighth.

Cody Miller was running second during the middle of the Turbo main then took the lead and set sail in the last two laps with Baron second in the Holz/CST Racing RS1 ahead of Matt Hancock. Early leader Hunter Miller had a jump landing so hard that his intake came loose and he had to pit. He worked back into the top 10, but Glen Helen wasn’t as kind to Ronnie Anderson (Pol), Davi Haagsma (Pol), Brian Willison (Pol) and Chris Johnson (C-A). On the last lap, Shawn Saxton put on a charge and snatched third from Hancock, who had scored the win in the third round over the Millers (covered in July 2019, UTV Action).

Iron Man Beau Baron: While most WORCS Pros race only one or two classes per round, defending Pro Turbo Champ Beau Baron had triple duty, as he is also going for the Pro 450 ATV Championship. Baron has won the 450 Pro title four times (2014–2017) and wants the title back from Mike Sloan (Yam). Including practices and mains, that’s a lot of racing. Baron’s TRX450R lost spark in the 450 Pro practice, but he was able to troubleshoot the problem for the Pro 450 main on Sunday. He won the race over defending champ Sloan to score his fifth win in six rounds, and he has a 19-point lead in that championship. He turned eight laps in the hour-long 450 Pro main, and he turned the same fast lap time as Cody Bradbury in his RZR Turbo S! Baron, then raced the Pro Turbo main after the blistering Pro 450 ATV main. A win and two seconds made him the top scorer on the weekend. In past seasons, Beau has also raced his dirt bike, ATV and two UTV mains in a weekend. He gets a tip of the UTV Action visor!

HOW TO COOK RAMEN WHILE YOU RIDE SXS

Jacob Peter Kicks off Round 1 of WORCS for 2020