THINGS WE SEE OUT ON THE TRAIL 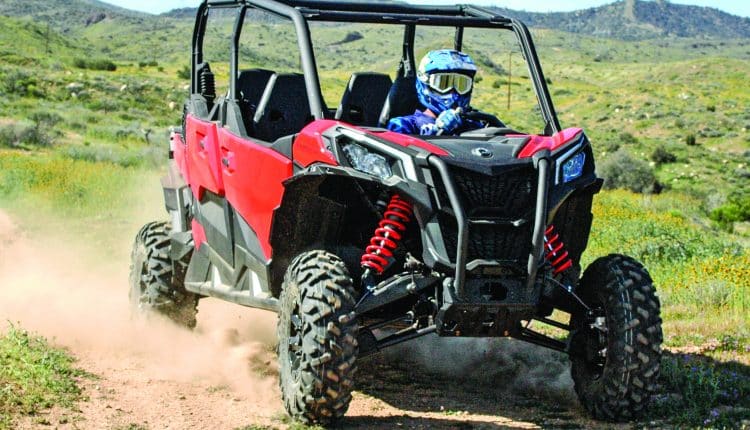 I was out doing some testing with the Can-Am Maverick Sport Max a while ago, and I stopped on a ridge trail to take some notes and drink some water. The view from the ridge gave me a great view of the trails in every direction. Then, it happened. I spotted something I rarely see in the area of the desert I was in—other riders. Sure, there are plenty of well-used-looking trails, and I often see tracks from popular UTV tires, like Maxxis Bighorns or ITP’s Versa Cross, but I’m always surprised how often I don’t see anyone. Most of the terrain is pretty steep and difficult out there. I guess most riders probably prefer faster, more open riding.

As the first group came into view, I could see the machines were not UTVs. A modified Toyota pickup led the group of three vehicles, and all were road machines modified for off-road fun. I was impressed that they all made it up onto the trail they were on. I was fairly sure of the route they took; there’s a rocky section and a steep climb on the way that could be difficult and unkind to a road truck. As surprised as I was to see the lifted road trucks on what I think of as a good UTV trail, I was also surprised how slow they were going. They were well past the tough sections, on a part where you can be on the gas pretty hard in a UTV, and they were all creeping along together like they were searching for somebody’s lost wallet. None of the trucks looked to be damaged, so I had to assume the group was all perfectly happy to be barely moving. Nothing wrong with that. Everybody has their own way of enjoying trails and the outdoors.

That said, I couldn’t help but wonder how much fun those drivers were missing. In UTVs, for less money than they had tied up in their trucks, they would have the ability to go slow—or fast if they got the urge. Even the smallest UTVs, like the RZR 570, Wildcat trail, or Pioneer 500, could offer more potential for speed than those trucks were showing. If you know anyone who enjoys off-roading in a road truck, do them a favor and take them for a ride in your UTV. They deserve to know what they’re missing.

The trucks were only out of view for a few minutes when I heard an engine sound that got my attention. The machine was well off in the distance, but it was distinctive and high-revving like a YXZ1000, but with a deeper growl, like a RZR 1000. Scanning the hilltops, I saw a flag and then a UTV come into view at the top of one of the steepest hills in the area. It was a YXZ, and behind it a second later a RZR XP 4 1000. Then a Can-Am Maverick and an older RZR 800 climbed the hill on a side trail, followed by a dirt bike and an ATV. Two groups of riders in one day in a place I rarely see any? Was it a holiday I hadn’t heard of? The temperature wasn’t bad that day, but the wind was insane, hardly the kind of perfect conditions I’d expect to bring out more riders than I’d ever seen.

As the group moved in my direction, I could hear two sound systems along with their engines. The lead machine stopped briefly at a fork in the trail to let the next one know where to turn. As the UTVs, ATV and dirt bike motored by, I thought about how much fun my friends and I could be missing by not getting our dirt bike and ATV riding friends out on UTV rides. I haven’t done it in a while. UTV trails aren’t always the best for dirt bikes and ATVs, but nobody says you all have to take the same route for the whole ride. Getting out riding is always better than not going at all, and riding is always more fun with friends along, no matter what kind of machine they have.