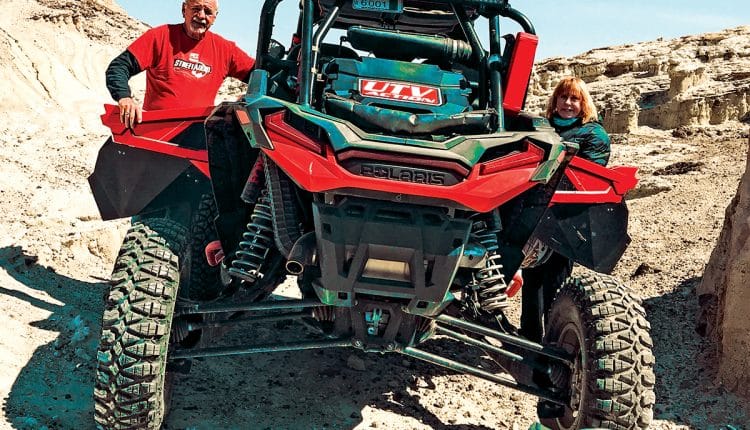 The thrills continued when I landed the dream job at then 3 & 4-Wheel ATV Action magazine. Having raced dirt bikes since I was 15, in hare scrambles and later motocross, racing three-wheelers and then four-wheelers was also a major blast. Even more than wind in my face, the thrill of racing and slinging roost at others fueled my competitive spirit.

When the Yamaha Rhino and then the Polaris RZR 800 came along, I wasn’t ready to park the dirt bikes just yet, even though “with age comes the cage.” Whenever my parents or brother did something that made me mad or hurt my feelings, I’d gear up, get on my dirt bike, and hammer some hard laps at the nearest track. I would work out the anger on the track and berms, cutting some great laps. In fact, whenever I crashed early in a motocross moto, I’d get angry with myself and then do some of my best riding and racing.

Think of it as “anger management” or, in new-speak, “temporal tuning.”

The same is true for me today. When I get mad, I go for a ride in whatever test unit is ready to go. Getting sideways around USFS turns in a UTV and drifting with 1000-foot drops on one side and a wall on the other does wonders for the psyche. The faster the better for wind in my face and working things out in my head.

Shoot, I’ve always done some of my best thinking when covering ground in or on any type of vehicle. For that matter, sleeping in motion is some of the best sleep I’ve ever gotten, whether in the family wagon or camper or on an airliner at 35,000 feet. But, covering some distance on dirt is always more fun than on tarmac or concrete.

Riding is also greatly enhanced by “muscle memory.” Hitting the perfect line at the perfect speed on the single-track trails I ride on my KLX450R or YZ400F does wonders for the mind and body. And, hitting the perfect line or conquering the toughest hill or obstacle in a UTV gives the same feeling. Muscle memory is a good thing, and although the brain isn’t a muscle, it works a lot like one. And riding is the best mental workout.

The brain processes all of the senses, and rides are very sensory. The smell of a two-stroke-burning bean oil or an X3 burning race fuel brings back fond memories. The sight of a favorite trail or hillside covered in spring flowers, or the sound of a wound-out triple in an X3, Wildcat XX or YXZ are soul-soothing. The taste of fresh, cool water from an Assault door-bag bladder, even when washing down a mouthful of dust, is heaven. The touch of gloves on the steering wheel or pulling a tear-off adds to the experience.

Shoot, doing a trail for the hundredth time is fun, even when testing for work. Jack and I did the same Robbers Roost/Red Rock Canyon ride twice in a row recently, but the second ride was a flower-sniffing tour with the ladies. It was great, and lunch on the trail always tastes better than in the big city. Always. Taking one new trail on an otherwise routine ride brings a new memory and a longing to return there as soon as possible.

Making memories on rides is the best part. This ride brings back memories of past ones with people who are no longer with us, such as my parents. Riding to famous destinations is always a gas, no matter if it’s in Marc Burnett’s Monster Energy X3s, Wide Open Adventures’ Class 10 buggies, or on dirt bikes with the Chris Haines tour. Mike’s Sky Ranch is always a thrill, even after 33 years. So is Valley Trinidad or rolling back into Ensenada after a long ride.

My dad lived by the biker credo, “It’s the ride, not the destination.” In a UTV, it’s both. Ancient mines, cabins and petroglyphs are destinations on many, many rides in the Mojave Desert and around Tombstone, and I’ll never tire of going there. Even when I have to strap a wheelchair in the bed or back seat to get around once there, I’ll be there with a big grin.

See you on the trail!