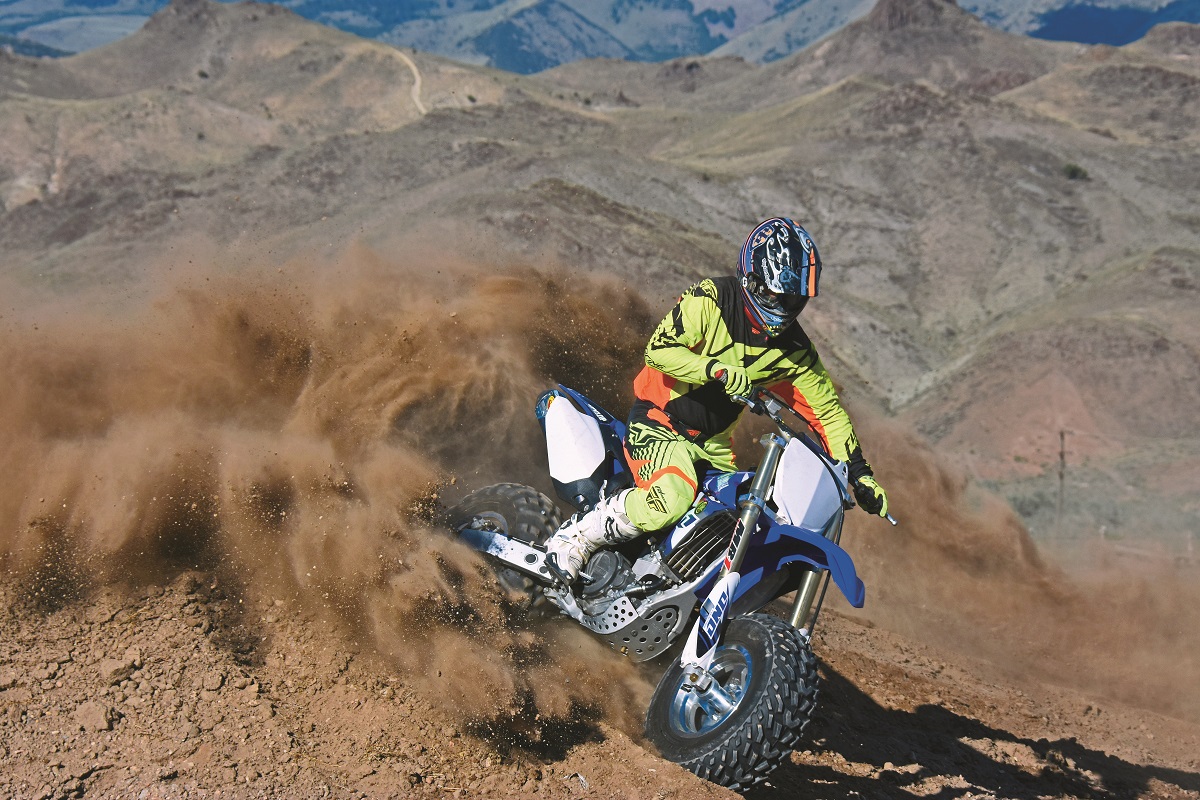 Way back when this magazine was called 3&4-Wheel Action, I came on board as associate editor the same year Yamaha introduced its revolutionary Big Wheel BW200N two-wheeler ATV. The 1985 BW200N was an absolute hoot to ride, and then-editor Steve Casper and I would set up courses in sand washes and race for hours on end, rain or shine. For 1986 Yamaha added the BW80S, a fat-tired PW80 and an electric-start BW200ES. The kick-start BW200 was dropped by 1987, which was the year Yamaha went big with the BW350T. I loved the BW350. It was an awesome machine, and I was thrilled to wheelie it for what seemed like forever on Estero Beach in Baja. I even raced it at an Arenacross race in Bakersfield. It was only “Crashsper” and I who signed up, so the promoters put us in with the Open Novice bike class. I holeshot and led the race until some yahoo ghosted his brand-new Husqvarna 500 into me. The BW350 had a lot more power than the 200, but it was still lacking by today’s standards. In 1988, all three Big Wheels were produced, but none were made in 1989. The BW80 returned in 1990, but that was its last year.

Honda made its own version with an automatic-clutched five-speed transmission. The TR200 Fat Cat was also big fun in a small ATV package. Crashper, “Winkle Wally” and I rented three while on vacation in Cabo San Lucas, Baja, Mexico. We rode them, wide open, on Highway 1 to a snorkeling spot in the morning, and then we went off-road to an old abandoned lighthouse. It had a dune covering one side, and we’d ride through a sand-level door, through the lighthouse and then jump 6 feet to the beach. We also did some big-wheel freestyle, doing kick-turns on steep faces of beach dunes. So, we had a ton of fun on these under-powered big wheels, and we really hated to see them go the way of the three-wheeler.

WITNESS THE BIG WHEEL REBIRTH
Extreme Fabrication Racing (XFR) in Saint George, Utah, missed Big Wheel Yamahas as well, so they decided to bring them back with a new twist. Instead of a low-tech engine from the old Yamaha Warrior 350, why not use the modern version of the engine that spawned the four-stroke revolution, the 1998–1999 Yamaha YZ400F? XFR set out to develop Big Wheel kits for the YZ426F through the YZ450F. XFR built a wider swingarm for an 11-inch-wide rim and incorporated a jackshaft on a concentric shaft for chain adjustment. XFR then machined the rear hub out of a 35-pound chunk of billet aluminum, and also machined the hub to accommodate the OEM Yamaha YZ450F brake rotor and sprocket. Heavy-duty bearings were used in the billet-aluminum hub, and the billet AMS wheel was fitted with a Carlisle AT489 24×11-12 for our hard-pack terrain test.

Up front the stock triple clamps were removed and wider clamps were machined from solid billet aluminum. The dirt bike we rode was a 2010 YZ450F converted to a Big Wheel using the OEM forks. The final design will have the fork clamps moved to the inside for more radiator clearance. XFR machined a new front hub with doublewide bearings and a new mount for the OEM YZ450F front brake rotor and caliper, as well as the AMS billet wheel. For hardpack, XFR fitted a Kenda Pathfinder 25×8-12 direction tire. In all, the Big Wheel kit for the 2001–2014 Yamaha YZFs has 70 parts, not including tires and wheels, for $2590. Kelley Blue Book lists a 2010 YZ450F like this one for $3790, so the rolling chassis you see here would cost about $6600. Is it worth it to be able to shred dunes and desert with a 60-horsepower ATV?

RIDING THE BIG WHEEL 450F
We got Charlie Ogden, a local pro rider who races a Honda CRF450R, to ride the XFR Big Wheel 450F, and he ripped up the Paiute UTV Jamboree King of the Trail obstacle course for photos. He felt the fork spring rates were a little soft for his riding style, but he looked good on the Big Wheel. I got to ride the Big Wheel as well, and all those Big Wheel memories came back. How cool it would’ve been to have this sort of power with those old Big Wheels, but, then again, those machines couldn’t touch the sophisticated long-travel suspension, aluminum perimeter frames, giant hydraulic discs brakes, liquid cooling and EFI-induction of the modern 450s. We also got a chance to ride another XFR Big Wheel shod with sand tires and made a few new Big Wheel memories in local sand washes and at Oceano Dunes SVRA at Pismo. XFR is also planning to build Big Wheel kits for Hondas, Kawasakis and Suzukis!

WHERE TO RIDE AND RACE YOUR UTV: JULY RACE DATES