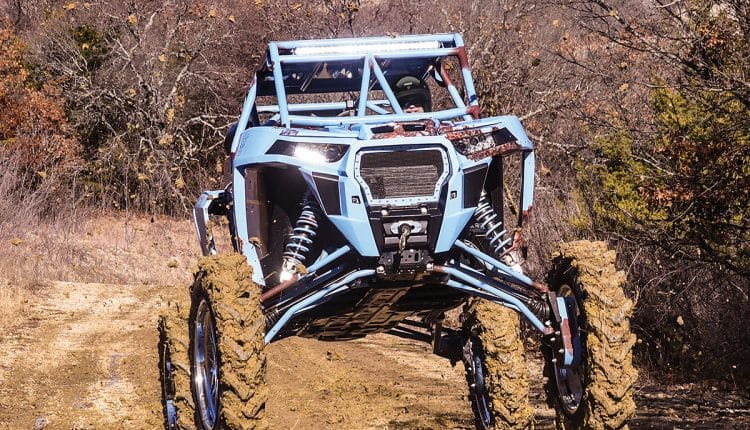 Lance Moore is a contractor and avid mud enthusiast. He started out with a RZR 900 mud build, then bought “Showstopper,” the RZR XP1K Dustin Jones built for his dad. Showstopper won the Show & Shine at the High Lifter Mud Nationals in 2014. As wild as the S3-built Showstopper is, it is only a two-seater, so Moore called on Triple Threat Off-Road to build a show-stopping, eye-popping and eardrum-throbbing four-seat RZR XP 4 1000, one that would “leave no doubt whose it was when you saw it on the trail.”

Triple Threat started with a custom cage with four suicide doors integrated into the frame and cage, then wrapped the frame with a Glazzkraft fiberglass XP 4 body and dash. Next, high-clearance S3 suspension arms with an 8-inch lift were mated with SuperATV 8-inch portals for use with the brand-new MotoHavok Checkmark 42-inch mud tires on all-new MSA American Force 24-inch chrome wheels. The S3 8-inch lift kit includes gull-wing A-arms, high-clearance trailing arms, radius rods with heavy-duty upper rods, and custom-length RCV axles for $4100. They’re powdercoated with 11 color choices for Polaris OEM matching, or you can get custom colors.

Between the S3 lift, SuperATV 8-inch portals and all-new 42×8.5-24 EFX MotoHavok Checkmark tires with American Force wheels, this RZR has so much ground clearance, you could camp out under this XP4.

Dubbed “Mistreated,” the XP 4 build got a 40-inch LED light bar in front and an S3 rear bumper with two 10-inch LED back-up lights, plus a third 10-inch LED was added to the speaker-pod bar mount. The Triple Threat XP 4 also got twin LED whips and 12 under-glow LEDs for standing out at night. Then the build was sent to 1st Class Graphics for a wild Voodoo Blue wrap with integrated rust spots on the Glazzkraft body and Triple Threat roof. Rust spots were also applied to the custom Triple Threat cage tubes, WER needle-shock springs, S3 bumper and suspension components, and SuperATV portals.

Not only does this wild XP 4 1000 build stand out on the trail, day or night, it can be heard coming from a long way off due to its sound system. 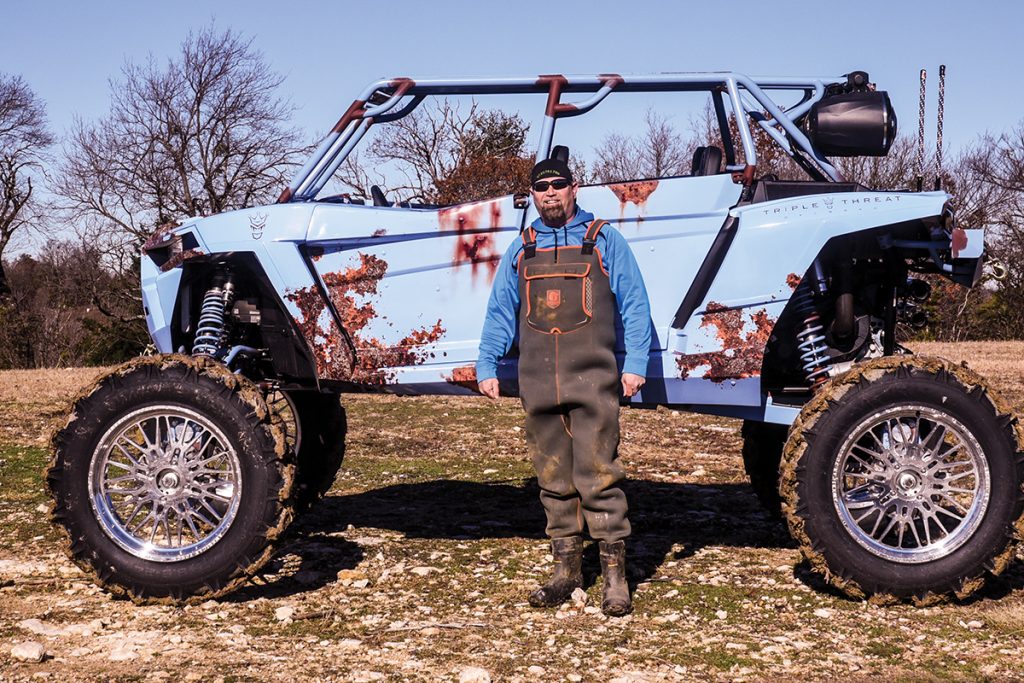 THE NEW APRIL ISSUE IS HERE!