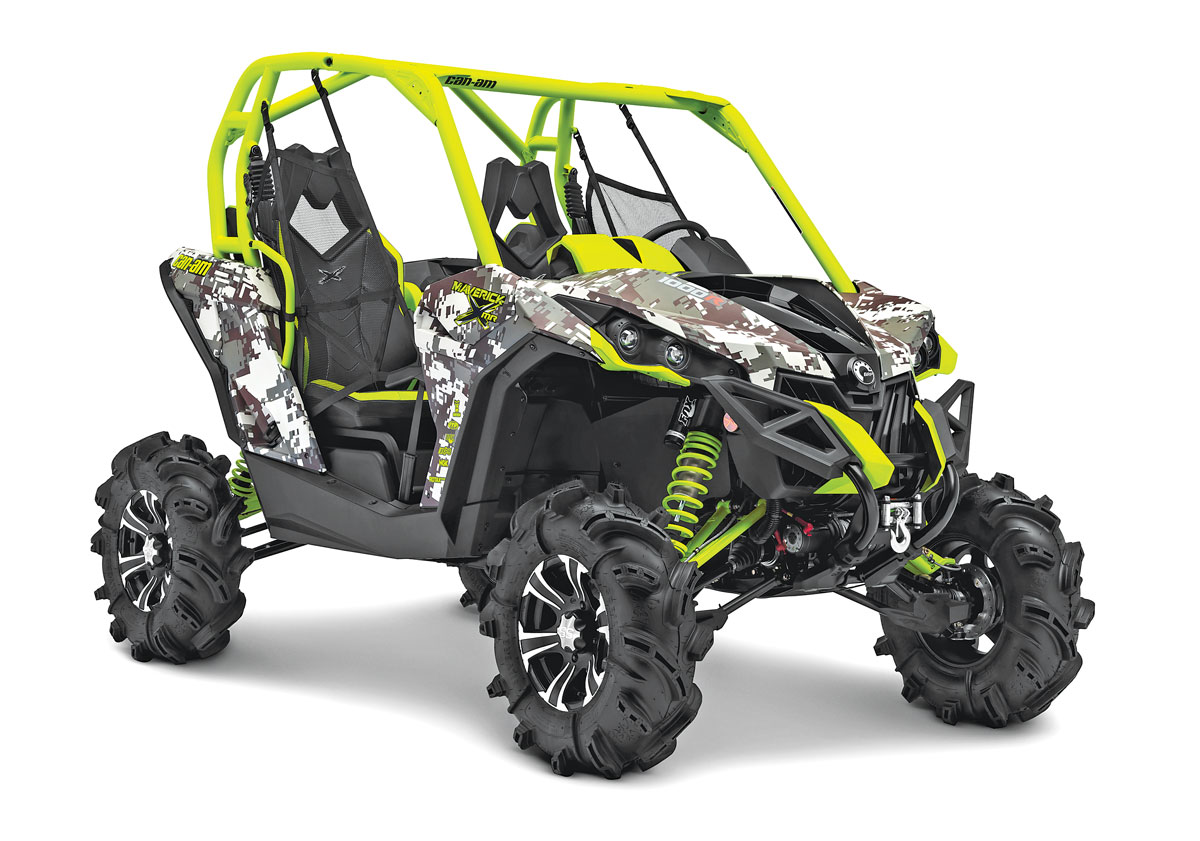 Kawasaki switches from Realtree APG HD Camo to Realtree Xtra Green for 2015 ATVs and UTVs, and we got a chance to see the new pattern being applied at the KMM plant in Lincoln, Nebraska, for the Mule Pro FXT introduction (see the sidebar on water-dipping). Yamaha switches from 2014 Realtree AP-HD to Realtree AP for 2015 Vikings and Grizzlies. Honda switched to its own Honda Phantom camo for 2014, and 2015 ATVs and Pioneers will also sport Honda’s exclusive pattern. Suzuki sticks with its True Timber camouflage for KingQuads for 2015. Arctic Cat is switching to True Timber as well. Kymco uses True Timber New Conceal for its ATVs and UTVs. Can-Am has its own digital camo for ATVs and some UTVs, and the 2015 Mud Maverick 1000R X mr, Renegade 1000X xc and Outlander 1000X mr have a wild new ultra-digital camouflage pattern with Manta Green-matching suspension components, bumpers and accents.

Suzuki’s True Timber pattern is muted with fall colors for hunting. It’s $400 to $700 more than with base colors, depending on the model. Arctic Cat is also switching to True Timber for 2015. MSRPs haven’t been disclosed yet, but camo was only $200 more for ATVs and $300 more for Prowler 700 XTX and HDX EPS models in 2014.

Yamaha switches to Realtree AP camo for 2015, and the Viking VI is $800 more than solid-color models, but it comes with a soft sunroof too. Expect 2015 Grizzly ATVs with the new camo to be $450 more than plain plastic.

Polaris stays with its exclusive Polaris Pursuit Camo (PPC) for 2015. Sportsman ATVs are generally $500 more with PPC over solid colors, while Rangers are generally $700 more for PPC. We’d like to see the PPC available on RZRs and Aces too.

Kawasaki also fine-tunes its Realtree partnership with a switch from APG-HD to Realtree Xtra Green for 2015. Brute Force 750s are $500 more with this hydro-graphic treatment, while the Teryx 800 is $1300 over Super Black, but it comes with a hard-plastic sunroof. Imagine a KFX450R with this pattern!

Honda’s year-old Honda Phantom Camo returns for 2015, and it’s more tuned to fall hunting with its autumn colors than other manufacturers’ offerings. The revised Rubicon 500 with IRS is $450 more with Honda Phantom Camo, and the Pioneer 700 is $600 over red or olive.

Kymco uses True Timber New Conceal on its MXU ATVs and UXV UTVs. Camouflaged ATVs are only $200 more than with base colors, and UTVs are $500 more.

HOW FACTORIES GO CAMO
While aftermarket companies like AMR Racing, Blingstar and One Industries apply camouflage patterns to diecut, adhesive-backed vinyl, others have a film wrap like CamoSkinz.com and CamoWraps.com. Moose Utility Division has several patterns in camo-cloth rolls, but the best and most durable means of applying any camouflage pattern to large plastic body panels is via a water-dip (hydro-graphic) process. Here’s how Kawasaki applies its new Realtree Xtra Green pattern at its KMM facility in Nebraska.

HMF has new power upgrades for your Turbo RZR

The Special Appeal of Spectating a UTV Race

A LETTER TO PRESIDENT BIDEN