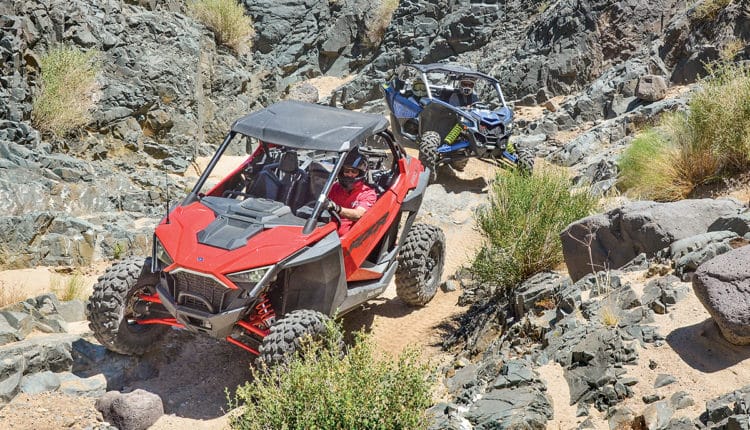 We might be jumping the gun at the moment, but as of press time, Polaris hadn’t announced a wide version of the new RZR Pro XP that we could compare to Can-Am’s top-of-the-line Maverick X3 X rs Turbo RR; however, at $27,999 (RZR) and $27,499 (X3), these two machines are comparable in a lot of areas. So, we figured we could do an X3 Turbo RR vs RZR Pro XP shootout and tell you what we liked and didn’t like.

Each of these machines has had its own chance to shine in separate test articles. The Can-Am Maverick X3 X rs Turbo RR was on the cover of the July 2020 issue, and our first mini test of the RZR Pro XP was in the October 2019 issue.

This test is the first time we’ve had the two machines on the same trail on the same days to really feel how they compare side by side. We spent the day in them and covered over 100 miles of varying terrain—from slow-speed, technical rock crawling to high-speed whoops and graded roads. This is what we think.

Can-Am’s three-cylinder Ace engine puts out 195 horsepower and is noticeably faster than the RZR. When you stab the throttle, you have to hang on tight and control the beast before it controls you. In some high-traction situations, it feels like the X3 could actually pop a wheelie.

The RZR is still fast with a 181-horsepower, twin-cylinder engine. The power is noticeably smoother and more manageable. Sure, both engines have to be managed by input from the driver’s right foot. It’s easier to do so in the RZR. The floorboard of the X3 is flat and has no heel pocket to help you modulate the pedal properly, just a small hump next to the cockpit divider. The RZR has a big step in the floor right below the pedals that you can wedge your heel against for greater throttle control. Both rides are exhilarating, and you can get to top speed very quickly.

Both machines have massive Fox shocks. Can-Am gives this X3 huge 3-inch Fox shocks in the rear and 2.5s up front. Fox Live Valve 2.5-inch shocks are found on this Pro XP. The entire Live Valve system has been recalibrated from the older Dynamix version. Now, Comfort is softer, Sport is spot-on for higher speeds and rougher terrain and Firm is, well, very firm, and we have only found one use for it. Well, actually it was the X-button, which put the suspension in full stiff mode momentarily.

At slower speeds and in bumpy or technical terrain, the RZR easily outshined the X3. Even with the slow-speed adjuster turned out on the Maverick’s Fox shocks, we were never pampered.

Where the RZR seemed to articulate over the bumps and rocks, the X3 offered more feedback—not only through the seats, but through the steering wheel, too. Passengers also noted the much plusher ride in the RZR. At higher speeds over rough terrain, the rear of the RZR bottoms out sooner than expected. Any G-outs taken at a good clip will have the skid plate kissing the ground. We did find if we used the X-button on the RZR’s steering wheel every time we approached a G-out, it would help keep us from bottoming.

In the X3, the suspension loves high-speed situations—the faster and rougher, the better. The long A-arms dance over moguls and skip through whoops. Ground clearance is great, and we never bottomed out. The only issue is that there is a lot of feedback resonating from the front tires to the steering wheel. No matter which EPS steering mode we were in, the feedback was worse than we would expect. Additionally, as we found out in last month’s ITP tire test, that feedback gets even harsher when you install heavier tires. The RZR is more neutral and tight-feeling.

When Polaris redesigned its original cabin, it was a huge improvement, and this Ultimate model has almost everything. With the new roller-adjustable seats and the six-point, sewn-together harnesses, the driver feels way more secure if everything is adjusted properly. The seating position in the new RZR is lower than in the older model, but not quite as stretched out as it is in the Can-Am. Neither machine has full doors, and neither has a great view out the front. The Can-Am has such a long hood, it’s hard to see over it when rock crawling. The RZR’s hood is shorter, but the new design isn’t a big improvement over the old. What we did like about the RZR’s cockpit was the huge infotainment center that holds the Ride Command GPS, digital gauge, shock features and rear- or front-facing cameras. Furthermore, there is way more sealed and open storage within the RZR’s dash. From the huge glove box to the dual-center cubbies, you are not wishing for more. The X3 has a big glove box and one small shelf between the occupants’ knees. If the contents fell out, they would land right on the floorboard—not good. The cockpit is much quieter in the RZR as well.

Oil checks and changes are a tad quicker on the RZR but a bit messier, as the filter isn’t in a good area for drainage. The oil filter on the Can-Am is a cartridge type that has to be accessed under a cap but comes out much cleaner. The air filter is easier to get to on the Can-Am, and neither requires tools. We like that Can-Am allows you to grease the A-arm bushings, but we hate that the skid plate is riveted on. What we do like is how Polaris made the cargo tray easily removable to access the engine. The Can-Am cargo deck is removable but much more involved. Speaking of cargo, the deep box on the RZR holds all sorts of items. You barely need to strap it in. Can-Am’s tray does not give you confidence when tying things down, as it doesn’t have walls to tie up against or a back to keep loose items from sliding off.

The X3 Turbo RR vs RZR Pro XP question is answered by what you want from a UTV. If you want to go fast over bumps, hold the throttle wide open  and just plain scare the heck out of all your passengers, you can do that better in the Can-Am X3. It handles well at speed in rough or smooth terrain. We still don’t like how much feedback the steering wheel has and how loose the suspension components feel when you put a jack under the car; however, at least Can-Am gives you an option of long travel.

Although there is no long-travel option for the RZR Pro XP yet, Lonestar Racing has a plus-5-inch kit you can add to any model of Pro XP to get that extra width if that’s what you are looking for. Regardless, this new platform not only outperforms the old one, it brings quality features and creature comforts Can-Am doesn’t match at the moment. By the time you read this Can-Am will release an updated X3 for 2021 to keep up with the advancements found on the RZR Pro XP. We expect a wider Pro XP very soon as well. 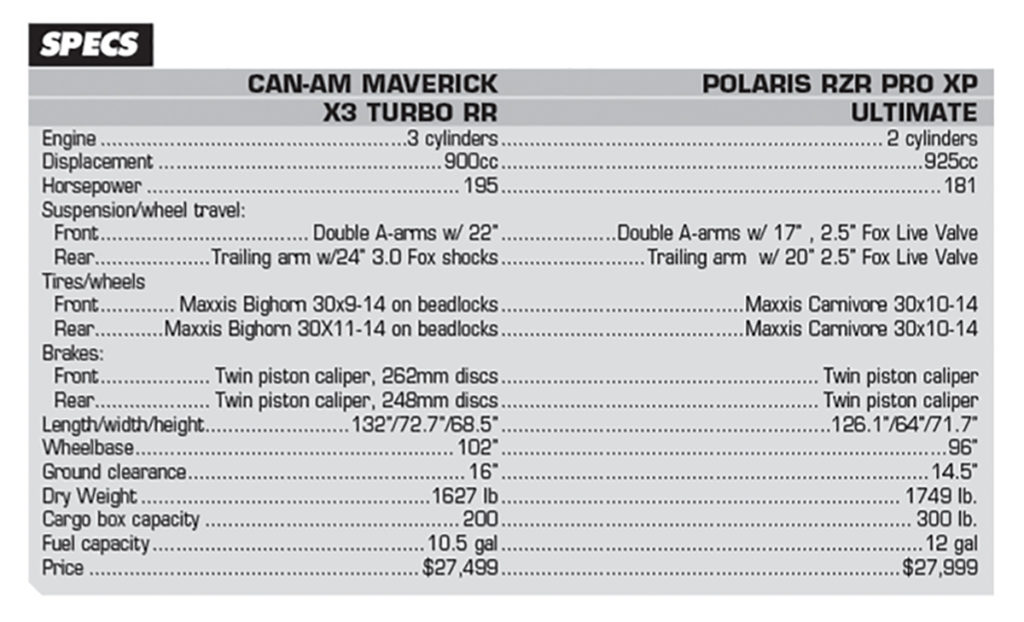