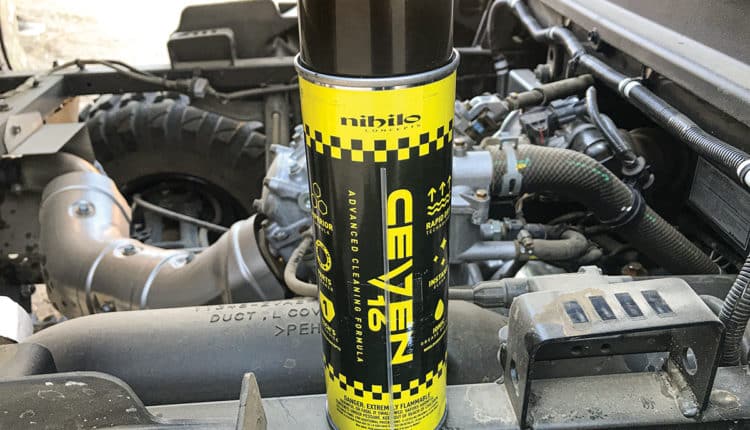 Ceven 16 is formulated to remove oil and grease without disassembling components and to instantly clean engines, carburetors, brakes, transmissions, suspension, and plastic bodywork prior to applying graphics. Designed for technicians and mechanics, this parts cleaner contains no chlorinated solvents that can contaminate waste oil.

A 14-ounce can of Ceven 16 is formulated with heptane, ethanol and caron dioxide as a propellant. It doesn’t contain 1,1,1-trichloroethane or perchloroethylene, and it’s intended for industrial use. It’s highly flammable. The steel can comes with a plastic cap, nozzle and spray tube.

From anyone who works on their own machines to professional mechanics.

Ceven 16 dries quickly and doesn’t leave a residue as claimed. We installed the clear spray tube to concentrate the stream and sprayed away oil and grime from engine cases. Caked-on grime took a few blasts, but Ceven 16 removed it. We also used it to quickly remove dust clinging to fluids on suspension and brake components. It even removed varnish from a dirt bike carburetor float bowl. Nihilo includes ingredients, warnings, instructions for use (shake well before spraying) and first aid should Ceven 16 be inhaled, ingested or splashed into a user’s eyes. We used nitrile gloves when using for safety.

INTERESTED IN THE GARMIN TREAD? WE WANT TO HEAR FROM YOU