Great American Short-course (GAS) held its third and fourth of eight rounds at Glen Helen Raceway in Devore, California, and the Pro UTV classes put on great racing for the spectators in the stands and pits. A wide, well-groomed track made for great racing, but the production Turbos were quicker than the Weller Racing SR1s at GHR. On Saturday’s round-three qualifying, Dan Kelly turned a 53.776-second lap in his X3 Turbo, while Corry Weller turned a 54.289 in her WR SR1 and Braden Chiaramonte turned a 55.338 in his RZR Rs1.

First up on Saturday, the WR SR1s had no inversion on the start, and Jason Weller got the jump on wife Corry into the first turn. The Wellers were 1-2 the entire race with Jason leading every lap and turning his fastest lap, a 54.611, on Lap 9 of 12. Weller Racing’s Dallas Nord leapt into third off the start to round out the podium, while Matt Land ripped from eight off the start to fourth.

Production Turbo UTVs, the start was inverted six places, so “Bronco” Dan Kelly jumped into the lead ahead of Lance Root (Pol) and Keith Brooks (C-A), while Chance Haugen moved up to third. Kelly led until the mid-race caution, and on the restart Root took the lead from Kelly, who went wide in the second turn and dropped to fifth. Root’s lead was short-lived, as he broke in the rhythm section. Kelly bent a radius rod but nursed it to third. Haugen took over the lead and turned a 53.931 on the 10th lap on his way to his third straight Pro Turbo win. 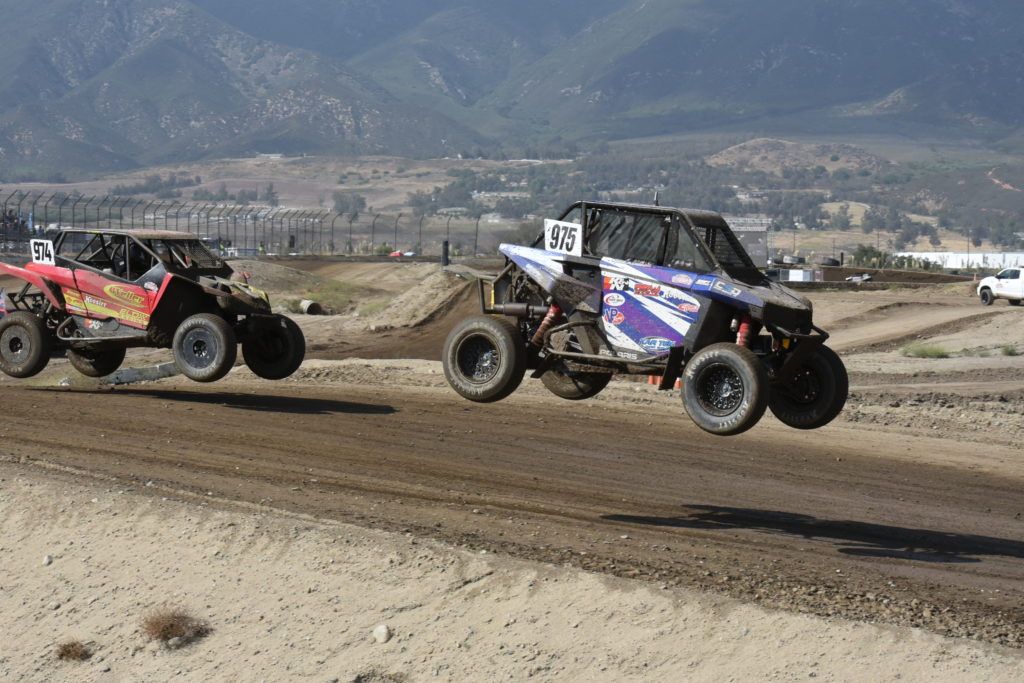 The Production 1000s inverted one row, so Braden Chiaramonte and Dallas Nord started third and fourth. Billy Nichols (Yam) took the lead ahead of Braydon Beatty (Yam), but Beatty shot outside and ahead in the second turn. Nord snatched second from Nichols while Chiaramonte briefly dropped to fifth and then put on a charge to third and then the lead. Nord dogged Braden and capitalized on the mid-race caution and restart, taking the lead for good. Chiaramonte stayed in second, while Braden Vanderveer (Yam) moved up from sixth to fourth and then to third.

On Sunday, Jason Weller was SR1 top qualifier with a 53.970-second lap, but Chance Haugen did a 53.702 in his RZR S Turbo. Nord took the Production 1000 TQ with a 54.827. In the SR1 main, the inverted start put Dallas Nord in the lead for the first half of the race, ahead of Matt Land with Corry Weller third and Jason fourth. With the pack repacked for the restart, Corry jumped ahead with Jason second, while Nord dropped to fourth. Corry took over the lead briefly but Jason got her for the win, his third of the season. Nick Perry rounded out the podium behind Corry.

Production Turbos saw Haugen take the early lead but Kyle Walker (C-A) capitalized on a mistake and led the fifth lap ahead of Haugen and Anthony Ochoa (Pol). Walker led after the mid-race restart but Haugen got past to lead lap 9. He turned a 53.683 on lap 10 and won the main to go undefeated so far in 2021. Walker and Ochoa filled out the podium.

Production 1000s inverted three rows, so Cody Vanderveer (Yam) took the lead  over Karaston Hernandez (Yam), while Chiaramonte and Nord were fifth and sixth. Nord moved up to third by the mandatory mid-race caution and capitalized on the restart to take second behind Vanderveer. Two laps later he took the lead and went on to win his third main of the series, with Vanderveer second and Chiaramonte third.

In Youth 1000s, Drake Mittag took the third round win ahead of Chaden Zane Minder, Mittag’s third straight victory. Minder fought back in the fourth round to end Mittag’s win streak, with Joshua Guillanthird, all in RZR Rs1s. In RZR 170s, George Llamosas took the third-round win and remained undefeated, this time with Declan Shields second and Aadan Aguilar third. On Sunday Llamosas kept his streak alive ahead of Dexter Warren and Ian Torfi.

The fifth and sixth rounds aren’t until October 9-10, and GAS has yet to finalize a venue to replace Reno, Nevada; we hear Victorville has those dates open, so all eight rounds may take place in California.