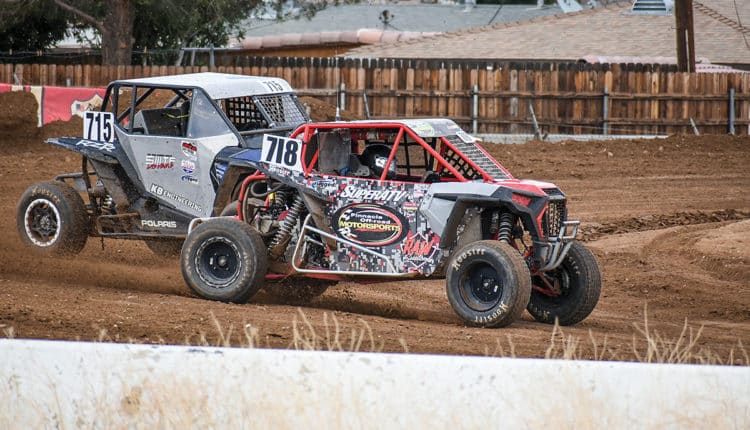 Chance Haugen is the defending Turbo Pro champion of the SoCal Lucas Oil Regional Off-Road Series (LORORS), and he’s currently leading the 2020 Production Turbo Pro points with two rounds to go in both Arizona and SoCal LORORS. Chance Haugen’s #1 Lucas Oil Turbo S has never qualified worse than second in four California rounds and has powered him to two wins, a third and a fifth to lead Trey Gibbs by 4 points. His sister Chelsea scored second behind him at the second round for a Haugen/Polaris 1-2. In Arizona, Chance was top qualifier and winner of the main at both rounds run so far. He also finished third in the 2019 LOORRS Turbo Nationals with two podiums, behind Corry Weller and Ronnie Anderson. He was the LORORS Arizona Unlimited UTV Rookie of the Year in 2015 and champion in 2016. Chance and Chelsea race very similar Turbo S RZRs by Performance Off-Road Motorsports, SuperATV, Fox Factory Shocks, Hess, Hoosier and DWT.

Performance Off-Road did the Turbo S race build’s frame, cage, bumpers and nerf bars. The entire cabin and bed were deleted, with a custom-crafted aluminum bed, roof, firewall, center console, dash, side panels, floor and safety fuel-cell enclosure with fire door. The Sparco single seat also has a custom neck restraint fabricated out of aluminum and a five-point Simpson safety harness. Chance is also protected by a CNC-machined mesh rock screen and side nets per LOORRS rules. The radiator-relocate kit with CBR radiator and aluminum twin-fan mounts is by Ron Davis Racing (www.rondavisradiators.com, [800] 842-5166).

The Turbo S steering is replaced with a SuperATV EZ-Steer EPS unit ($799.95) with steering shaft and mounting hardware and a Hess Quick-Steer 2:1 unit ($650) with Quick-Release hub ($90) and Dished steering wheel ($90). Steering is armed with SuperATV’s heavy-duty tie-rod kit ($149.95) with swaged 4142 chromoly alloy rods and hardened 4130 mono-ball rod ends with bigger 14mm threads. Pins are also heavy-duty, with cotter pins on both ends. SuperATV also supplies the Rhino 2.0 heavy-duty axles ($229.95 each), which are claimed to be twice as strong as stock with 4mm-larger 4340 chromoly axles. Rhino prop shafts ($689.95 with billet SuperATV carrier bearing) are a 1/2-inch larger than stock and constructed of 4140 chromoly. Shaft-wall thickness is .120 instead of .088 inches, and the CV joint is stronger.

Chance’s sister Chelsea runs Shock Therapy RC2s with ST RIS and DRS ($3,995.95) instead of Fox Factory shocks. Chance runs SuperATV aluminum radius rods ($379.95), which are made of 7075 billet and are 32mm thick versus 19mm stock rods. They have 5/8-inch chromoly steel heim joints and helical inserts for super strength.

Chance ran 27.5/8.0-15 Hoosier NRM E-Mod dirt-track tires with M500 compound on four DWT Ultimate UTV beadlock wheels. Ultimates have .190 reinforced center plates, an inner rolled lip half, beadlock outer half construction and 8mm beadlock bolts. For the Glen Helen LOORRS opener, he ran Method wheels. He also uses the Aim Solo 2 DL, a motorsports GPS/Glonass lap timer with 2000-track database. It goes into learning mode when it realizes it’s at a track not in the database. It connects to the ECU to record rpm and has configurable back-light and side LEDs to tell you what the last lap gap was from your best lap. It also uses WiFi to download to a PC and can mate with a SmartyCam HD camera. The Aim Solo 2 DL is $767.75.

As for power, Lucas Oil rules require a production engine to be sealed, and only the intake, exhaust and ECU can be modified. Haugen runs a K&N-style filter behind the left number plate and an exhaust out the right side of the car with DEI titanium exhaust wrap and turbo cover. A Bikeman clutch and ECU tune boosts power past Turbo Pro XP output for racing.

BEST DOG SEAT FOR YOUR UTV