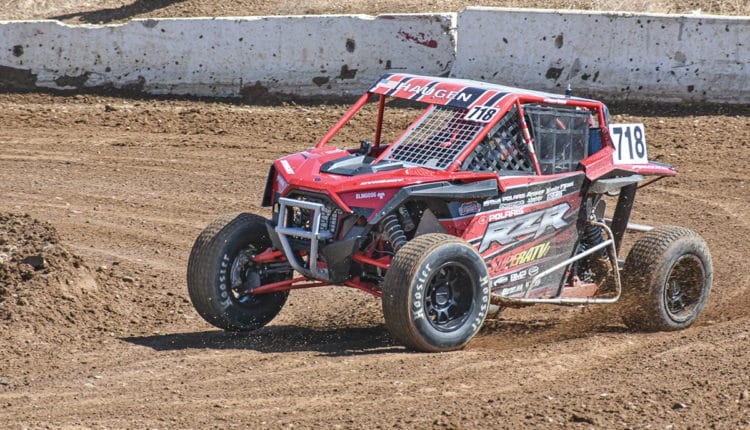 Multi-time short-course winner and champion Chance Haugen has a new ride for the 2021 Great American Short-Course (GAS) series—a Polaris RZR Turbo Pro XP. The #718 Pro XP won both GAS Pro Production Turbo mains over the series’ opening weekend, and Chance was also the top qualifier at round two. In this article, we’ll see what makes Chance Haugen’s RZR Pro XP so fast. Haugen also had his Champ Off-Road Tour RZR Turbo S on hand in California for some testing and tuning.

The Haugens, Joe Chapman and Jimmy Owens at Xtreme Machine & Fabrication (XMF) did the race build, including the cage, roof, doors and bodywork. XMF has long been fielding trophy kart teams and has Mia Chapman as a team member. With GAS having strict engine-modification rules like LOORRS did, engines are spec and sealed. Only intake, exhaust and ECU modifications are allowed, and the Haugens built the straight-pipe exhaust and intake. A Dynojet ECU Power Commander is tuned by Owens. The Haugens also fabricated the Turbo intercooler and bed delete, and the relocated radiator is a large Ron Davis Racing (www.rondavisradiators.com, [800] 842-5166) cooler with two large fans. They also fabricated the front and rear push-bumpers and nerf bars.

Chance blew a front diff in practice and had to change it out. He runs an HCR Racing bolt-in front RZR diff gusset kit ($249.99), which ties the upper and lower A-arm mounts together for strength.

SuperATV Rhino 2.0 axles ($229.95 each) drive all four wheels; they’re 4mm larger than stock and made of 4340 chromoly with stronger CV joints. Rhino prop shafts are $689.95 with a billet bearing carrier and 4140 chromoly thick-wall construction. Chance switched to Method Race wheels for 2021 and runs 15×7 409 Bead Grips ($182.52 each), which are made of A356 aluminum with T6 heat treatment and have Bead Grip technology for running low pressures without the weight of beadlocks. They’re rated at 1600 pounds each. He runs Hoosier UTV/SxS 27.5×8-15 race tires with the M500 compound.

The entire Pro XP cabin is gutted of the new dash and all bodywork; the door skins, center console, race dash and fire wall are completely custom. The doors are attached with Dzus fasteners for getting to the safety fuel cell, fuel pump and filter. Haugen sits securely in a Sparco seat with aluminum neck restraint and Simpson safety harness. He sits behind a CNC-machined mesh screen and in front of a wire-mesh radiator screen. On top of the Hess quickener rides an Aim Solo 2 DL, a motorsports GPS/Glonass lap timer with a 2000-track database. It goes into learning mode when it realizes it’s at a track not in the database. Connected to the ECU, the Solo records rpm and has a configurable backlight and side LEDs to tell you what the last lap gap was from your best lap. It also uses Wi-Fi to download to a PC and can mate with a SmartyCam HD camera. The Aim Solo 2 DL is $767.75.

All frame, cage and tilt-wheel tubes are covered with foam within reach of Chance, and he runs Rugged hand-held radios for instructions from race control and input from his spotter. He also runs Rugged’s carbon-fiber-bodied MAC3.2 two-person air-pumper system ($381) with a MAC-X expandable hose to keep cool and collected in the heat of battle.