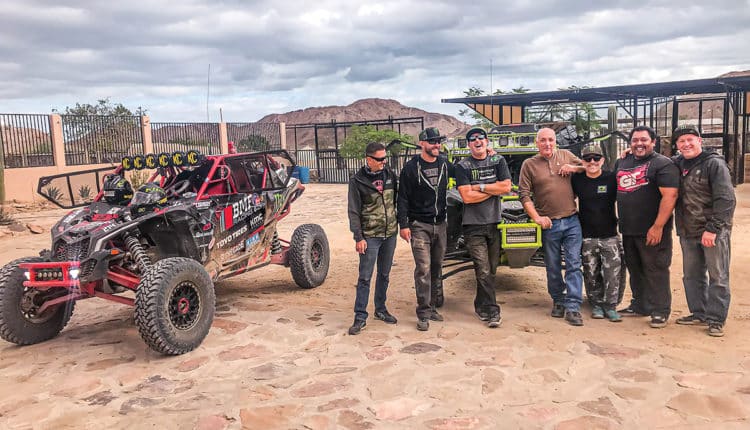 Fight fans need no introduction to Donald “Cowboy” Cerrone, who has a 36-15 win/loss record in Ultimate Fighting Championship (UFC) Welterweight and Lightweight divisions. Cerrone’s 36 wins include 10 knockouts (TKOs), 17 submissions and only 7 decisions from 2006 through September 2020. When he wasn’t training for a fight, working on his New Mexico ranch or doing social media, Cowboy got into UTVs. The former motocross racer turned fighter competed in the Celebrity race at the Mint 400 and the “Cowboy” Cerrone: UFC to UTVs transformation began. He had Brian Bennett at Long Travel Industries (LTI) build him a Maverick X3 Turbo RR and enlisted coaching from two-time SCORE UTV champion Marc Burnett. UTV Action got to do some pre-running for the Baja 1000 (covered last month) with Cowboy, Marc and Brian, and Cerrone was so stoked that he wanted to race the 1000 in 2020, but he ended up having to settle for the 2021 Baja 1000 instead. Here is some of the advice Cowboy got from Baja-veteran Burnett. 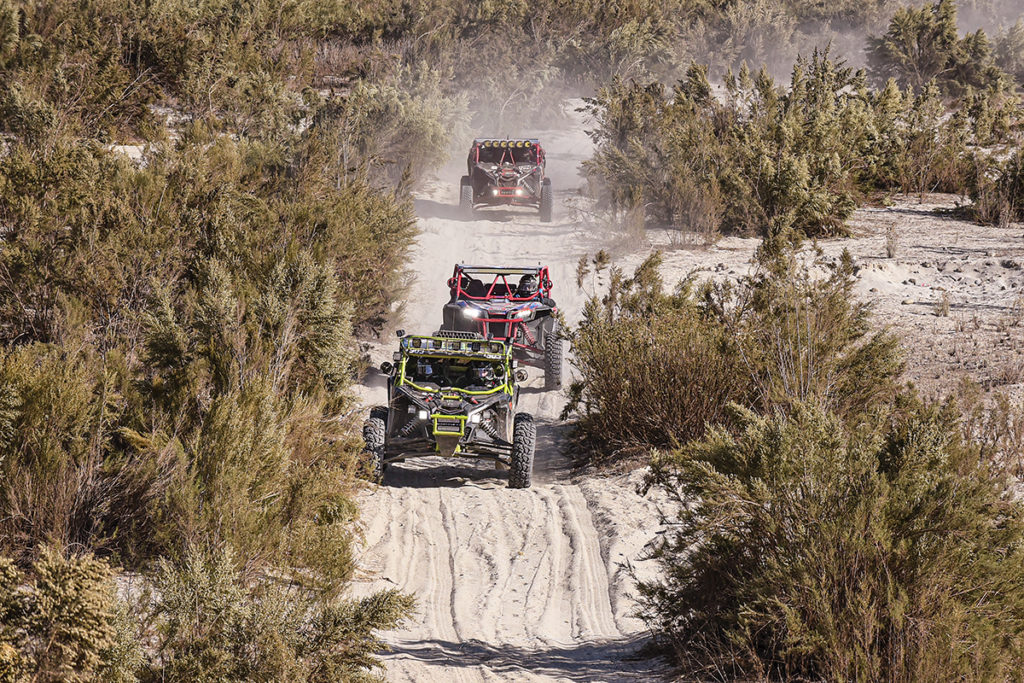 Top Baja racers start planning for the next race before the dust clears from the last race. Machine preparation and pit planning aside, the most complicated part of a successful Baja race is pre-running, which in itself takes meticulous planning. First, the desolate Baja Peninsula has scant cell service, hotels are scarce in small villages, and gas stations might be closed, out of fuel altogether or have old, stale gasoline. First-timers want to enlist the help of veterans like Burnett, who has three decades of experience and contacts. He also marks the race courses for SCORE.

Pre-running involves intricate planning. Satellite phones are required, as there is no cell service outside of bigger towns. Each race car, chase truck and pit has to have a sat phone. Marc uses a push-to-talk phone, like the Nextel Beep-Beep from SatellitePhoneStore.com. Teams can communicate worldwide, and when you key the phone, it sends out the exact GPS coordinates for your location. So, chase crews can bring exactly what is needed when—not if—you break down. These phones can be rented for each race or bought.

GPS navigation is mandatory; Marc uses Lowrance tablets, plus LeadNav backup. LeadNav’s 3D GPS maps can be used to pre-run, and the unit talks to you along the course. LeadNav calls out turns coming up, danger zones, and much more, and the navigator can zoom in and out on the screen. Burnett’s navigator, Fern Flores, marks the Lowrance route with every rock, cliff and other danger zone. The team has icons and symbols for trees, long straights (airplane icon), shortcuts, silt, virtual check points, ditches, hot lines, tight turns, pits, speed zones and more.

Logistics are as important to pre-running as the race itself. Race course maps are studied, and Marc plans on 300–400 miles per day. Hotels have to be booked well in advance. Chase trucks are stocked with plenty of spares, tools, food and drink, and gas. Restaurants in Baja are also hit-or-miss, and getting an upset stomach or food poisoning is worse when doctors are scarce. Marc has that issue dialed; newbies should only eat at places where there are plenty of local customers. Marc also stocks the Monster Mav with energy bars and granola bars, water, emergency blankets, jackets, trash bags, matches, lighters, flashlights, and tool bags for every job. He has been stranded in the desert overnight, so he treats each pre-run as if he were going camping. Desolation requires total preparation. He also carries octane booster and water dispersants for pump Pemex gas.

With each UTV prepped, the chase truck stocked and the pre-run planned, we set out from Ensenada to do the San Quintin/Pacific Coast loop. A new section out of Santo Tomas was a tight, twisty trail with a cliff on one side, so Fern marked turns along the route. Burnett pre-runs each section two or three times, with the first at 50 percent of race speed. Any section that might be run at night is pre-run once in daylight and once at night. Marc took Cowboy for a ride-along on the first day to show him what race speed was like. This is almost matted, with brake stabs to set the car for turns, weight the front and rotate the rear around. Marc also led Cowboy through other sections and called out braking points and danger zones on the radio.

Days one and two were dusty, and Cowboy didn’t have the needed amber LED/HID lights for dusty nights. Marc coached Cerrone on watching the car ahead of him and using the headlights to see upcoming terrain; as beams drop then rise, Marc knows a ditch is approaching. In heavy dust, he also watches the edges of the trail to predict turns and ditches. Baja races are run on dirt roads mostly lined with fences, but there are open areas where cattle graze. Experience is also important here, as a cow took out Kurt Caselli. Cattle tend to stay only in certain areas.

Cattle are one thing, but booby traps are quite another. Booby traps are common, and they can be anywhere on the course. If you see a lot of people, there is either a jump, which is marked on GPS, or a booby trap. Locals dig ditches and sometimes fill them with water. Marc has seen traps at the base of steep hills (with fire at the base!), after ditches and in blind turns. These are usually set the night before the race, so they can’t be marked in pre-running. Locals also remove danger signs to see crashes and alter turn arrows to get people lost. Some direct racers into mud holes so they get stuck. That is why Burnett and most top racers have Mexicans on the team and run Mexican flag stickers on fenders. It’s very important to have someone speaking the language on pre-runs, too. We had several.

On the San Felipe loop on the Sea of Cortez, we noticed at breakfast that Cowboy had blown an axle. Marc has a bag set up for everything needed to change an axle or repair a CV-joint. As we completed the job, clouds in the west confirmed weather reports of incoming rain. Marc, Cowboy and Brian set out west and north towards the clouds between us and Ensenada. The chase truck set out for Ocotillo, and it was fully dark by the time it met the UTVs. Cowboy laughed as Marc and Fern jumped out, put on black trash bags over their jackets, and got back in.

Pre-running the course to Ojos would take too long, so they decided to take the highway to Valle Trinidad for some famous tacos then head to Ensenada. By Valle Trinidad, Cowboy and Brian were soaked. As we climbed in elevation after dinner, rain turned to sleet. Running wide open, Cowboy blew a belt, and the chase trucks performed the swap. The twisty road between Ojos Negros and Ensenada is scary by day in UTVs, and they did it in the rain at night. Still, Cowboy was totally stoked with the pre-run adventure and couldn’t wait to return for the race.

Marc and Cowboy are in talks about the 2021 Baja 1000, which is a point-to-point from Ensenada to La Paz. That takes even more preparation, pre-running and planning. UTV Action will be in on some of the pre-running, and we’re planning on picking Burnett’s brain on pit tricks and secrets. With Cerrone’s UFC talent and record, he definitely has the reflexes, hand/eye coordination, footwork, strength, stamina, and general toughness to excel at UTV racing. He says he starts slow in fights and can apply that to UTV racing as well. With coaching from the two-time champ, Cowboy could well become a force in UTV racing!

See how you can Ride Baja with experienced guides here: https://utvactionmag.com/7-day-cabo-utv-tour/