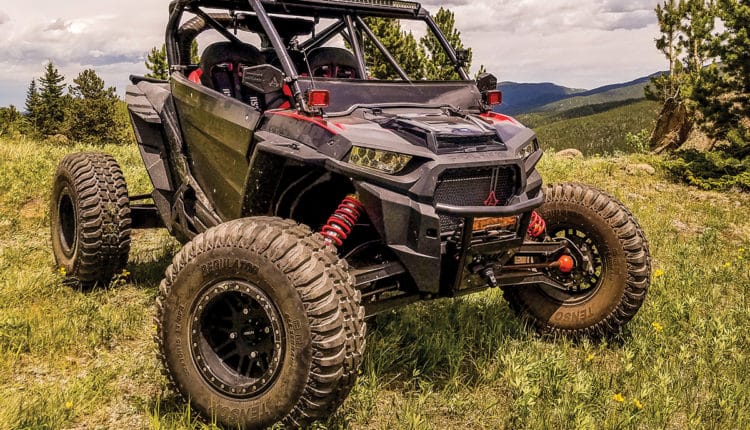 — How to build the Ultimate RZR for you —

Editor’s note: Landon Phillips’ custom Polaris RZR Turbo was only a dream when he started it. Now it’s a reality that’s ready for adventure or racing. Here, Phillips shares the story of this special machine.

It all started in February 2016 when I printed a picture of a Polaris RZR and hung it in my cubicle at work. This was my new dream! I set a goal to buy the 2017 RZR Turbo when it came out at the end of 2016. I did everything I could to make sales at work and save money to afford my dream. Every day at work I would look at that picture to remind me what I was working towards.

When times were tough and motivation was low, I would take a quick break and look at the pictures. Finally, as the year wound down, I started to realize my dream was going to come true. I was ready to buy the new 2017 RZR Turbo as soon as it came out!

I didn’t know the battle had just begun. I visited and called every dealership in and around Denver, Colorado, and nobody had a Turbo, or knew when one would arrive.

I called dealerships in Oklahoma, Kansas, Utah and New Mexico, and nothing! I started calling local Colorado dealerships every Tuesday (they are all closed on Mondays) until they all knew me by name. I got on every waiting list possible. Then, one day, unexpectedly, in the end of November 2016, I got a call from one of the dealerships. They had one 2017 RZR Turbo on a truck heading their way. I wanted it! I actually shed a few tears of joy. 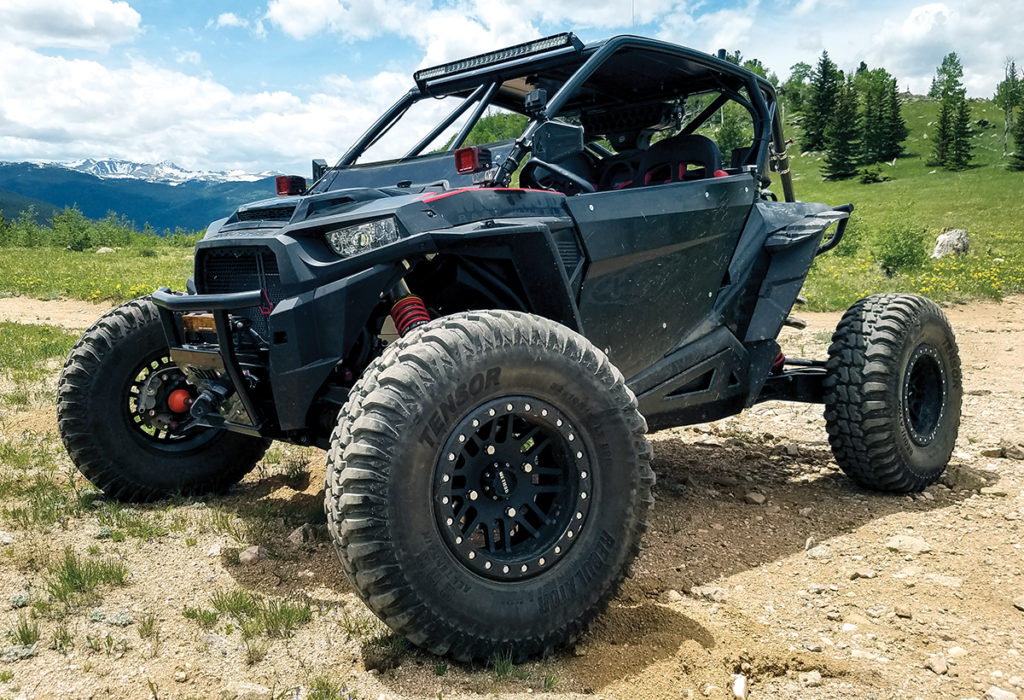 GOALS FOR THE BUILD

My goal for this build is to create a bulletproof RZR that I can use to bomb through the desert or climb high in the mountains and race. My dream is to quit my full-time job and become a professional UTV racer. I want to race in the Baja 1000, Mint 400, King of the Hammers, and other SCORE and BITD races. I work a full-time job in sales/marketing and have been trying to build this machine and dream for the past year and a half in my spare time. This includes working on building a social media following on Instagram (@phillips.racing) to help me attract sponsors.

Trinity Racing’s Turbo back exhaust, clutch kit and re-flash programmer produce big performance gains without having to send the ECU away. I also added Evolution Powersports’ blow-off valve, colder spark plugs, turbo intake boot and charge tube. Braided fuel lines and a billet fuel rail make the fuel system more rugged. An S&B Particle Separator and K&N filters protect the engine and transmission from dirt. An MTNTK Performance RZR Blow Hole transmission cooling fan keeps the belt cool. We do a ton of crawling in the mountains in Colorado, so we are often at low speed. The Blow Hole allows me to get hot air out of my clutch assembly, even when at low speeds.

I run HCR Racing dual-sport long-arm suspension, which has given me an increase in wheel travel to 21 inches with the King Shocks. This increases width to 72 inches and adds 3 inches of length for more stability. I upgraded the axles, ball joints and prop shaft with RCV Performance components, and Assault Industries tie-rods and sway-bar end links to make sure the suspension stays as bulletproof as possible. I also changed to Sandcraft RCR Motorsports front diff bearings for more durability and to eliminate the noise you get with the stock bearings.

The Method Race wheels beadlocks on the RZR match the ones on my Chevrolet Silverado 2500HD Duramax diesel chase truck. Thirty-two-inch Tensor Regulator tires give me a tire and wheel combination that’s ready for the harshest terrain. I originally went with the SDR Motorsports sport cage, doors and front bumper for their looks and strength, but I’ll be changing to a welded-in cage and doors to be BITD- and SCORE-legal.

The bed delete kit by Magnum Offroad gets rid of more than 30 pounds of bodywork from the back of the RZR. A UTV Inc. cooler rack carries my Yeti Hopper. Rigid Industries lights prepare the car for races that run into the night and night cruises in the Rocky Mountains and Moab, Utah. Additionally, I needed a race-legal rear light bar so I could be visible in the dust of racing. Baja Designs took care of me with their new RLT-B. The blue light is for slower traffic on the racecourse.

PRP Deegan 38 Comps with Assault Industries’ five-point harnesses keep me and my copilot in place and safe. Also, I installed a Safecraft automatic fire extinguisher. I also went to Assault Industries for durable, good-looking detail parts, including the front grill, side mirrors, steering wheel with quick release and shift knob. The mods should make the RZR unstoppable, but in case it isn’t, the KFI Products winch mount and a Warn Industries ProVantage 3500-S will get it moving again.

Phillips says his RZR Turbo performs even better than he dreamed it would, and he encourages everyone to set a goal and do everything they can to achieve it. 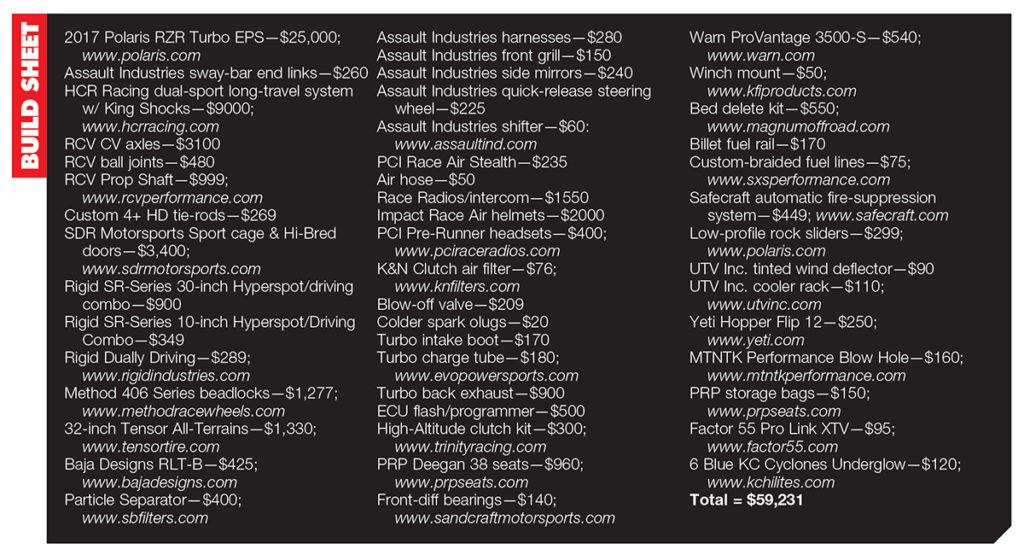