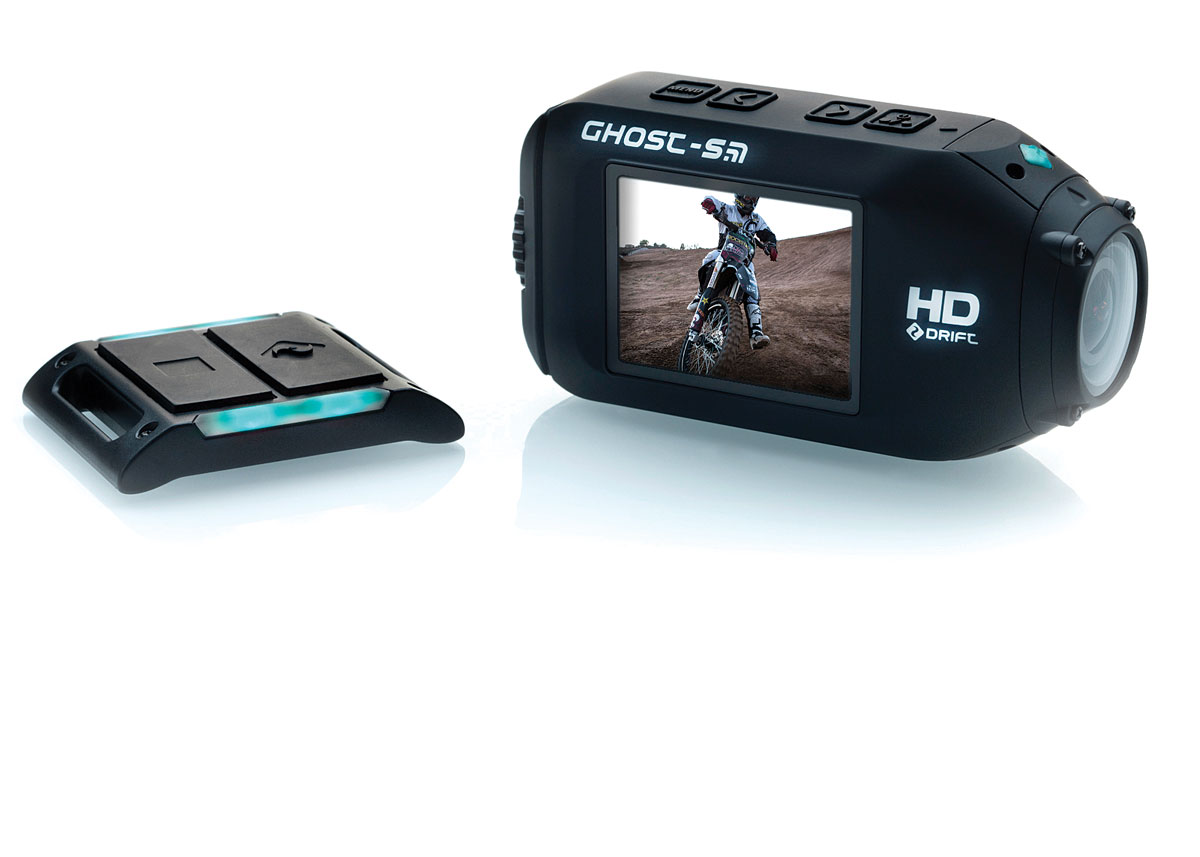 WHAT IT IS:
The Ghost-S HD is Drift Innovation’s best video camera yet, and it has 1080p video at 60 fps (frames per second) for the sharpest image quality, 3.5-hour battery life, and a lens that rotates up to 300 degrees to accommodate any mounting position. With a 12MP CMOS Sony Sensor, the Ghost-S has three scene modes— normal, vivid or low light—for shooting in any environment, and it has a clone mode for multi-camera control from one master Ghost-S for seamless synchronization. It also has new bitrate- adjustable video compression for best-quality video playback.

WHAT YOU GET:
The Drift Ghost-S is a bit larger than the Polaroid XS100i (tested last month) due to its 2-inch TFT LCD video screen with Corning Gorilla glass for setup, preview, file management and playback, and it has a cool, wristband, two-button remote control with a 32-foot range and LED lights so you can confirm recording without seeing the camera. The housing is engineered to withstand dust, snow, rain, roost and submersion down to 3 meters/9 feet, and an optional case lets it go deeper. A built-in microphone is adjustable and has noise reduction, plus there is an external mic port for more directional control. The Drift Ghost-S mounts to any tripod with a 1/4-inch screw, or fasten it to your helmet via the quickrelease adhesive mount or your goggle strap. Drift also has optional monopod ($39.99), shoulder ($39.99), suction cup ($29.99), handlebar ($19.99), roll bar ($29.99), firearms Picatinny rail ($29.99) and surfboard ($19.99) mounts, plus a rotating time-lapse mount ($24.99).

The Ghost-S is powered by a 1700MAh lithium-ion battery that charges via a USB cable, and the remote has a DC 3.7-volt 350mAh rechargeable (via USB) lithium-ion battery. The camera weighs 6 ounces (172 grams), and the remote weighs 0.77 ounces (22 grams). Besides the camera and remote, the Ghost-S includes curved and flat surface mounts, a goggle mount, USB cable, 3.5mm mic extension cable, universal clip, rear USB/mic connector hatch, Velcro strap and quick guide manual.

SETUP:
Unlike most action cams, the Ghost-S has four external buttons: action (on/off/record), menu, left and right. Press “action” and the unit turns on, indicated by a green light behind the lens (in video mode). Press “menu” and four icons come on the screen. Toggle left or right to highlight the mode or function, press “action” to open, and then left/right to check the function you want to perform, like formatting the Micro-SD card or choosing video mode and fps. The mode information will be displayed on the borders of the LCD screen. To sync with the remote, press the “action” button to turn on the Ghost-S and the on light will appear. Press “action” on the remote and its LEDs will flash green, and, as it acquires the Ghost-S, the lights will show green for video or yellow for photos. Press “action” again to start recording and the other button to stop recording (blue LEDs). To play back, push menu and toggle to highlight the play icon, push “action” and enjoy!

PERFORMANCE:
Video quality is amazing, especially in 1080p and the Vivid mode. You really have to push the buttons on the remote hard, but the camera beeps when you’re recording or stop recording. Also, the remote LEDs are hard to see in direct sunlight, so we stop in the shade to perform functions. The camera’s LCD screen is great for setting up your shots, changing modes and playback in the field, and the Ghost-S turns on automatically when you plug in the USB cable attached to your computer or device. At default settings, there’s a lot of audio distortion, so we turned down the mic. The external mic cable requires a different backplate that isn’t as water- and dust-resistant, so it’ll take experimentation to get the optimum sound level without distortion. Also, solid mounting increases audio and video distortion. We mounted the Ghost-S to the passenger handhold on the Sportsman 570 Touring, and it picked up engine vibration and made the video wavy. Mounting solidly to a helmet lessened distortion a bunch, but audio distortion was still noticeable. Mounting to the goggle strap provides the best picture and sound quality. The coolest feature is the zoom (10x), but if you zoom to maximum, it creates tunnel vision and greatly cuts depth of field, so backgrounds are blurred. At lesser amplification, it’s super cool and still crisp.