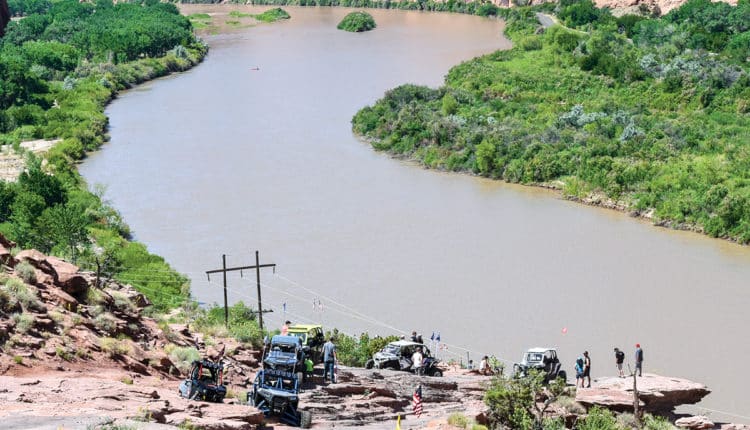 For more than 12 years, May has been the month of the Moab Rally on the Rocks (ROTR), but the 2020 ROTR was canceled due to COVID-19. The 13th ROTR will be held May 11th through the 15th and could possibly be the last ROTR, at least in Moab, which is a shame, because the same red-rock formations that have made Moab a motorsports mecca for rock crawlers also attract tourists from all over the world to the Arches and Canyonlands National Parks. I hope we don’t see endangered rocks stop the fun.

I’ve been there a few times on family vacations, but the first time I experienced its red-rock trails was in 1992 when EnduroCross inventor Eric Peronnard put on a ride for French Yamaha dealers on Tenere 660s with Mr. Dakar, Stephane Peterhansel. The ride started in Sedona and went through Arizona’s Painted Desert and Canyon de Chelley on the way to Moab. We rode what is now Poison Spider, and our helicopter landed on a huge rock dome. Peterhansel rode up to the copter, so I followed. Going up was no problem, but going back down was horrifying!

I was at the very first Moab Rally, held north of town next to the Archview RV Campground in an old church. We also went there in the winter of 2010 for a comparison of HCR Racing’s Rhino 700, RZR 800, Teryx 750 and XTZ1000 Prowler (ATV Action, April 2010). Slick rock is super slick with snow and ice on it!

Arctic Cat had a press event for its 2016 Alterra ATVs in the winter of 2015, and I had some time to kill one afternoon, so I went to the Moab Chamber of Commerce and asked what percentage of income did they attribute to off-highway vehicle (OHV) recreation. They didn’t know. Wait, what? There were and are several OHV tour and rental companies in Moab, and hundreds of people are on the payrolls of these companies. OHV tourism generates thousands of dollars every day in lodging, food, gasoline and goods and services sales, and the Chamber of Commerce doesn’t even track how much? Really? They were only interested in mostly foreign tourist dollars filling city coffers and the tills of artsy shops in town.

I’ve been to every ROTR except one, when the BLM was charging $300 for a photography permit (we reported on the ROTR anyway, using photos from the previous year). Rally headquarters has long been the Old Spanish Trail Arena, and one of the coolest things about the ROTR has been police escorts through Moab to the trailheads. Utah has long been an OHV-friendly state and even legalized street licensing of UTVs and ATVs with turn signals, side mirrors, insurance and registration. But, as soon as that happened, the management at Arches and Canyonlands NPs banned street-legal UTVs from those parks. UTV Utah and Kent “Moab Cowboy” Green fought for and won the right to ride UTVs in Utah’s National Parks, including Arches and Canyonlands.

After deliberating in late 2019 on the 2020 ROTR with rally organizers and agreeing on stipulations, Moab city and Grand County officials put a moratorium on UTV special events, denying a 2021 permit, the first sign of the endangered rocks effect. A handful of Moab residents had voiced noise complaints about UTVs ripping around town, and ROTR was specifically called out for attracting UTVs to town. Huh? What about the dozen or so rental/tour companies in Moab?

So, ROTR promoters moved the rally headquarters a couple of miles south to private property in San Juan County, where no permit is needed for the vendor area. Sales tax from vendors will now go to San Juan County instead of Grand County, and so will charity donations. ROTR will pay $20,000 from raffle proceeds to San Juan County Search and Rescue and the San Juan Foundation, a Blanding-based charity for education. ROTR even donated a Polaris RZR to Grand County SAR in 2016. In response to the ROTR move, wrote the Moab Sun News in December, Grand County Commissioners contacted the BLM and requested that the BLM revoke or deny ROTR’s trails permit! The BLM denied that request, stating it couldn’t breach ROTR’s 10-year contract without cause.

So, that’s the story behind the 13th annual ROTR. If you have a street-legal UTV for the event, make sure that you stay under the speed limit in town and keep the exhaust note quiet. My first Harley had straight pipes, and I quickly learned how to modulate the throttle to be as quiet as possible when passing police, but it’s not as simple with a CVT. If you do have a loud exhaust, Starting Line Products has long attended the ROTR and has quiet exhausts for sale. Longtime ROTR attendees know that Moab police have super-stealth, unmarked trucks, SUVs, and Challengers, and they’ll be looking for troublemakers. Don’t make the era of endangered rocks come sooner.

While there are big changes to the 2021 Rally on the Rocks, the trails haven’t changed, nor has the awesome scenery, so have fun and stay safe! And, if you want to be in the magazine, wear your helmet on guided trail rides.