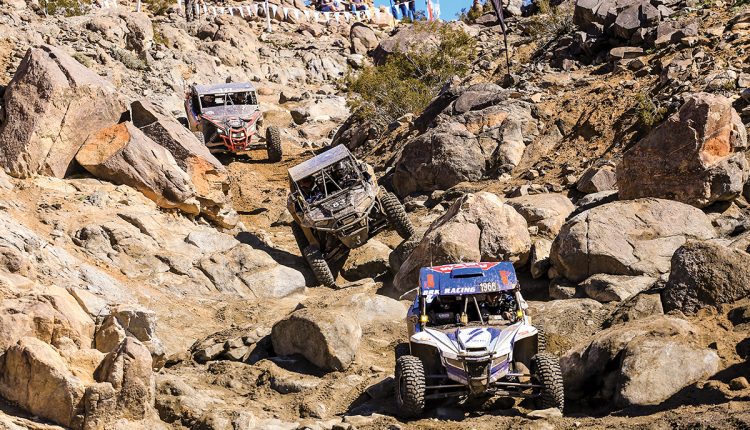 King of the Hammers has grown to be known as the toughest UTV race on the planet. However, there is only one name who has figured out how to conquer the now 160-mile rock and desert event—Guthrie. Mitch Guthrie and his co-driver Mitch Jr. have won the grueling event six times. Five of the wins saw Mitch Jr. in the passenger seat learning the ropes. After winning his second consecutive KOH in 2019, it looks as though Mitch Jr. has taken over the reins and is filling up the record books on his own.

For 2019, Mitch Guthrie Jr. called on experienced KOH competitor Jon Crowley to sit in the right seat and handle the navigation and winching duties. As it turns out, Crowley had an uneventful day, only having to get out once for a belt change. The team had pre-ran every inch of the course, including all of the rock sections several times prior to the race. The duo knew every rock on the course and raced a flawless run that lasted 4:52m, taking the win by nearly 30 minutes over Polaris RZR teammates Wayland Campbell and Branden Sims. Guthrie’s father did not make it to the finish line this year. Second-place finisher Wayland Campbell’s father, Shannon, finished in the fourth spot. The Currie brothers, Casey and Cody, brought their Can-Am X3s to the finish line in 9th and 24th place. Phil Blurton was the highest-finishing X3 in 8th, and the other factory Can-Am driver Dustin Jones finished in the 10th spot in his first attempt at KOH. Another father and son team, Johnny and C.J. Greaves, had issues and did not finish in the allotted eight-hour time limit. In fact, nearly 80 of the competitors didn’t score an official finish, solidifying the Can-Am King of the Hammers presented by HCR as the toughest UTV race in the U.S.

PAST WINNERS (ALL IN POLARIS RZRS)