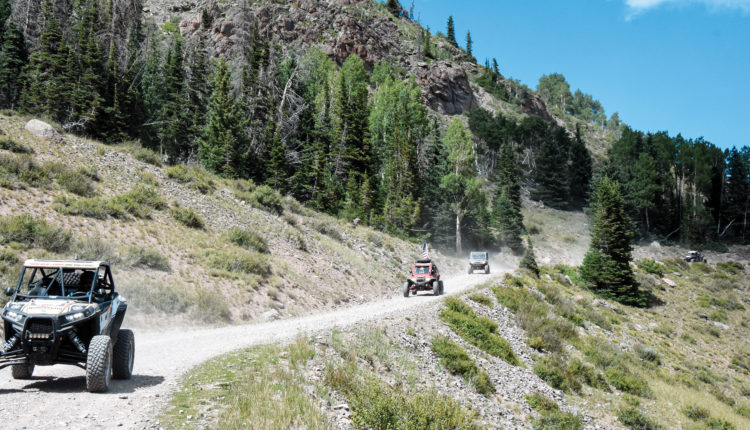 After a 2016 hiatus, the Paiute Trail UTV Jamboree returned to celebrate its eighth year of everything UTV. One of eight jamborees using the 275-mile Paiute trail, which was created in 1989 to bring OHV tourism to central Utah, the Paiute Trail Jamboree is the only one that has free daily rides, some with free lunches on the trail. Headquartered in Marysvale City Park, the jamboree was sponsored by Jorgensen’s Powersports and a big list of area vendors.

All these events are big fun, especially the blind man’s obstacle course where the driver is blindfolded and the copilot directs the driver around the course’s barrels. UTV soccer was also added this year, which was hilarious, but the drag races were super serious for bragging rights. Competitions were also free. The only things that weren’t free were the catered breakfasts and dinners and raffle tickets for the mountain of donated swag. Also new this year—participants who took the best photos of rides and scenery competed for $500 in cash prizes.

The best part of the Paiute Trail UTV Jamboree is the 10 daily rides, some of which cater to 50-inch and 60-inch UTVs. The 65-mile Monroe Mountain ride takes you up to the 11,222-foot Monroe Peak and then to Manning Meadow Reservoir and back to Marysvale. Rides are rated intermediate or beginner and are 30–100 miles in length. Some are themed rides, such as the Couples Special Ride that takes you to the highest point on the Paiute trail, the Spare Rib Special to Koosharem and the Cottonwood Loop Mining History ride, which takes you through Revenue Gulch and Bullion Canyon to Miner’s Park Museum. The only ride rated advanced is the 60-inch Special, an 80-mile ride south to Circleville (home of Butch Cassidy) and up Wades Canyon to Puffer Lake, Three Creek, Grizzly and Sawmill Ridges.

There are also three days of self-guided Rockhound ATV adventures and five destination poker runs. High hands win half the entry pot, while low hands win a Camp Chef two-burner stove. A large sign-up board is used for people to sign up for the 10 daily rides, or people can do their own self-guided rides. The scenery and wildlife are stunning in the Tushar Mountains and along the Paiute Trail system, which has thousands of miles of trails linked to the main #01/02 Paiute trail.

Big Daddy’s Deli catered the daily breakfasts ($7.50–$8.50) and dinners (adults $14.50, children $9.50). Friday’s smoked tri-tip, dutch-oven potatoes, corn on the cob, salad and fruit cobbler after a full day of competition really hit the spot. Saturday’s dinner was BBQ turkey, mashed potatoes and gravy, vegetables, salad and pie, with live music by the Spare Parts Band. The finale was the grand raffle of swag donated by sponsors and vendors, the door-prizes giveaway, and the presentation of the photography contest winners. A good time was had by all, so mark your calendars for the August 8–11, 2018, Paiute Trail UTV Jamboree.