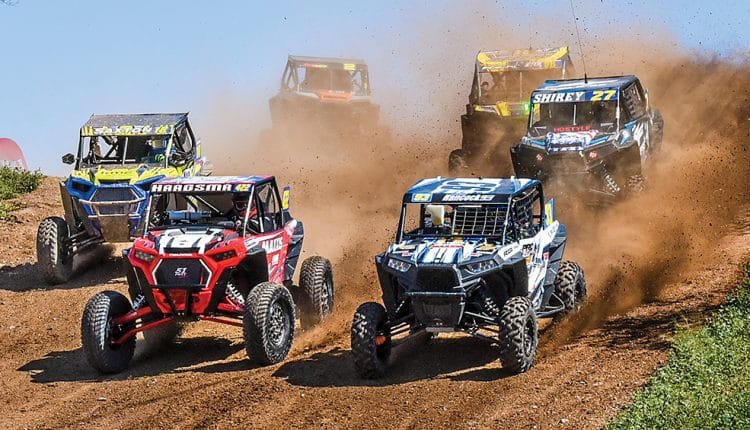 Round three of the UTV/ATV World Off-Road Championship Series (WORCS) schedule was held at Canyon MX in Peoria, Arizona, and Corbin Leaverton (Pol) and Matt Hancock (Pol) were big Pro-class winners. The Canyon MX round drew more than 149 UTV entries, and the course was gnarly, with plenty of rocks and cacti to punish those that overcooked turns. The Canyon MX course provided plenty of tabletop jumps, and most of the course was laid out on a large plateau adjacent to Peoria Airport, but it also dropped into a large river wash with plenty of sand, silt and rocks. Beautiful weather and constant watering made for great UTV racing.

The Pro Stock 1000 class was a parade of RZR RS1s, with three waves starting and dropping into the wash. Leaverton led the 1000s from green flag to checkers, with Cody Bradbury, Beau Baron, Hancock and Chris Johnson in tow, all in RS1s. Baron developed brake problems and faded, while Shelby Anderson charged from a second-row start in a RZR XP. Anderson finished with a better elapsed time, besting Hancock for the final podium position.

Racing was also hot and heavy in Pro Turbo, with Cody Miller pulling the holeshot over brother Hunter and Baron. Cody stretched his lead over Hunter and Beau, but his X3 slowed on the last two of five laps. The top three finished within two seconds of each other, but Hancock put on a charge from the second row. He won on adjusted time, and the Millers rounded out the podium. Two podiums in the first three rounds lets Cody Miller stretch the Turbo points lead over Cody Bradbury, who DNF’d the gnarly round, while Hancock’s win puts him within one point of second.

In Pro 1000s, Leaverton’s second win in a row stretches his points lead over the two defending champions, Bradbury (1000) and Baron (Turbo), who are tied for second.