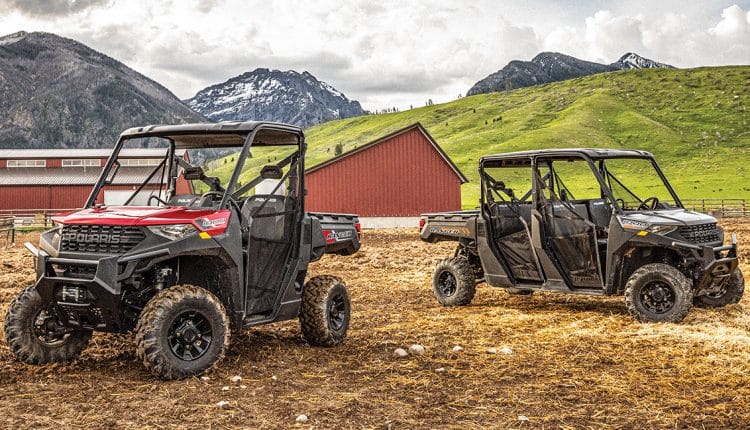 We knew Polaris had some big surprises coming for 2020, but we didn’t expect it to pull the top-selling utility UTV of all time, the Ranger XP 900, from the lineup. The good news is, there’s an entirely new Ranger 1000 and Ranger 1000 Crew to take its place! Here’s what you need to know about them.

HOW NEW IS IT?

The new Ranger 1000s are powered by a 999cc, single-overhead-cam, two-valve-per-cylinder inline twin with 61 horsepower and 55 pound-feet of torque. That’s 7 less peak horsepower than the Ranger XP 900’s 875cc, double-overhead-cam, four-valve-per-cylinder inline twin, but the new 1000s develop maximum torque 3000 rpm lower than the Ranger XP 900. The new engine is designed to pull hard without revving hard, which means less noise and vibration and more comfort.

Ranger 1000s have an all-new transmission. It’s a fully automatic, belt-type continuously variable transmission like the Ranger XP 900’s, but new clutch tuning provides exceptional smoothness just off idle and at low speeds. The entire clutching system has been completely re-engineered from the ground up with larger internal wear components for longer life.

A quick-release grill panel provides easy access to the radiator for service and cleaning, and a new high-capacity, round air filter has been conveniently located for easy access, inspection and maintenance. Longer-lasting, quieter and maintenance-free sealed suspension bushings come standard. CV guards have been carried forward for additional A-arm protection.

The new Rangers have up to 8 cup holders, a larger, deeper glove box, a 3.4-gallon lower dash bin, and easily accessible driver and passenger under-seat storage.

The Ranger XP 1000’s turning radius is 8-percent tighter than the XP 900’s for easier maneuvering in confined areas.

Ranger XP 1000s have 12 inches of ground clearance, half an inch more than the Ranger XP 900, with 10 inches of suspension travel front and rear.

Winter Prep Package: Starting at $2000 U.S. MSRP, available for the Ranger 1000 and Ranger XP 1000 in both three-seat and Crew models, extends riding through the winter season by making it easy to install cab systems and accessories for plowing. The package includes a heater kit, 900-watt charging system, Polaris Pro HD 4500-pound winch and a cab seal kit all installed at the factory, offering a turn-key package to customize units with a selection of Ranger Pro Shield cab system components and a glacier plow system.

Ride Command package: Starting at $2500 US MSRP, available on the Ranger XP 1000 and Ranger XP 1000 NorthStar Edition in both three-seat and Crew models. Ride Command offers a connected riding experience, including Group Ride, and new software now features Plow mode, which automatically lifts, drops and drags the plow based on the gear the vehicle is in. The 2020 Ride Command package now comes standard with a sport roof with premium roof liner and Polaris Pro HD 4500-pound winch.