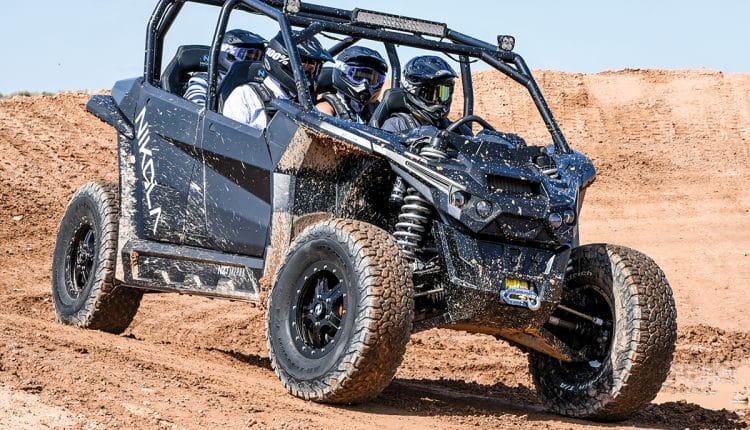 Arizona’s Westworld recently hosted the Nikola World 2019 unveiling of five ground-breaking zero-emission vehicles. Nikola introduced two long-haul trucks, the Nikola Two for the United States and the European-market Tre, with hydrogen fuel cells powering 800-volt electric motors. Nikola also introduced the first electric-powered personal watercraft, the WAV (Water Adventure Vehicle). But UTV Action was there to see and experience the first high-performance electric UTVs, the civilian Nikola NZT (Net Zero Toll) four-seater and the military Reckless, an autonomous weapons platform. Nikola unveiled these five vehicles to the world, then held demos of the NZT and Reckless UTVs the next day, along with the Nikola Two and Tre big rigs.

Nikola had prototype NZTs on the demo track and a fully enclosed version on display, complete with HVAC air conditioning and a state-of-the-art cabin with 4K digital display. Basically, shrunken-down four-seat Trophy Trucks, the NZT and Reckless are very similar in design and looks with electric skateboard architecture delivering a very low center of gravity via the lithium-ion battery packs and four electric motors being on the floor. The NZT is claimed to do 91 mph and 0–60 mph in less than 3.5 seconds, despite a 5250-pound weight, with a 150-mile range.

One look at the NZT and Reckless, and it’s obvious they were designed by truck builders with a heavy Trophy Truck influence. The suspension A-arms are huge and much beefier than any UTV on the market. The enclosed-cab NZT has six-lug bead-lock wheels shod with Goodyear Wrangler LT275/80R17 off-road tires, while the open-cab demo and Reckless units have five-lug bead-lock rims with BFG KR2 AT275/80R16 rubber. Fox RC2 3.0 remote-reservoir IBP shocks deliver 18 inches of front and rear travel. Brake rotors are huge and sport Wilwood two-piston hydraulic calipers, and they’re backed by regenerative braking via the four Bosch SMG220 electric motors linked to front and rear differentials.

The Bosch motors combine for a 440-kW output, which translates to 590 horsepower and 722 pound-feet of torque before gear reduction. With reduction, torque is 9,386 pound-feet! Regenerative Braking also recharges the battery. Bosch software precisely controls the torque at each wheel and features anti-lock braking (ABS) and active descent control (ADC), giving the NZT and Reckless super-car agility. Bosch also built the chargers. The 12-hour 7.6 kW charger is $550, while the trick three-hour 25-kW charger is $8500.

For the Reckless, an EVR solar charger can supply juice in hostile environments, and the Reckless can power communications equipment by exporting 15 kWs of power. There is also a civilian solar charger available for the NZT.

Since this was a world unveiling, demo time was very limited, and the course was not challenging at all for the high-end suspension. The NZT has four comfortable seats with IMMI Sub-Zero safety harnesses (naturally, being a zero-emissions ride). The floorboards were smooth and a bit cramped for taller passengers, but there is a padded bar for rear passengers to grip. Power and suspension were exceptionally smooth, and you only hear the electric hum of the motors, tires chirping and the suspension working. We didn’t get to feel the full acceleration of the four electric motors, but the acceleration and deceleration were impressive. The EPS system has high-torque assist, too. Production is set to begin in 2021.

• Up to 590 horsepower and 722 pound-feet of torque, yet no belts or transmissions to break

• Does not need air to operate and IP68-rated waterproofing (mud- and moon-ready!)

From a military standpoint, Nikola’s UTV design is redundant with four independent motors, one for each wheel. If an IED blows one wheel off, the other three continue to drive the machine. The technology is completely IP67 waterproof, and Nikolas can climb hills no other UTV can. There is also no heat signature, making it invisible to night-vision goggles and infrared. Better yet, Nikola is already working on a hydrogen fuel-cell version of the Reckless, which would eventually trickle down to the NZT. Yes, we could see the first hydrogen-powered UTV by 2025! 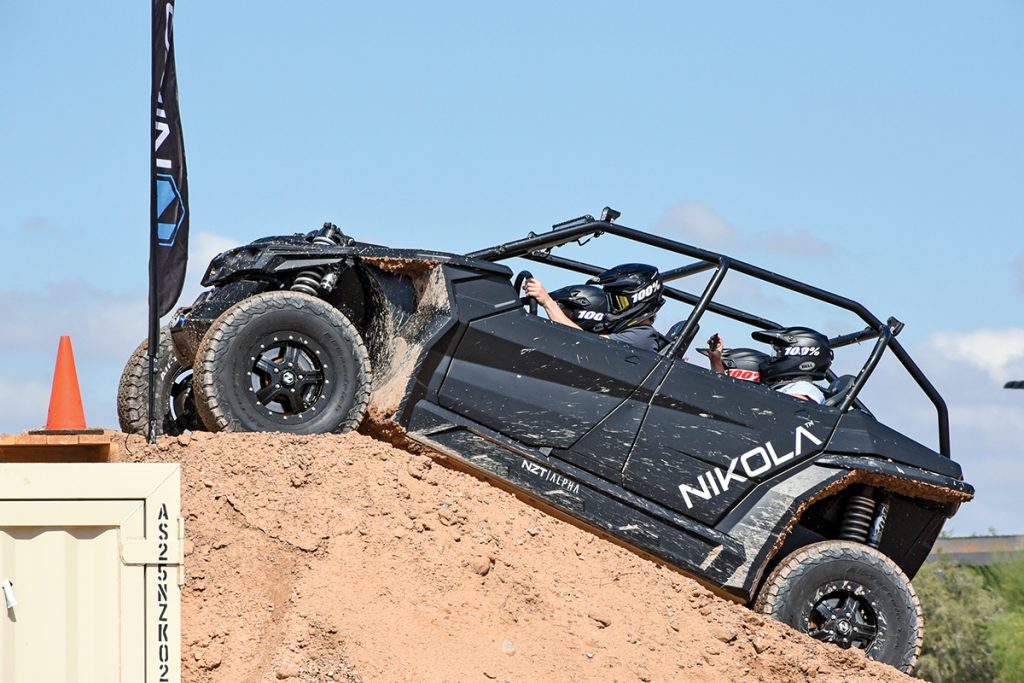 This technology is already in the Nikola Two truck, which has 800-volt motors and lithium batteries similar to the NZT’s, but the system is continuously charged by burning hydrogen fuel (132 pounds), giving a range of up to 750 miles. Anheuser-Busch has ordered 800 Nikola Two trucks for distributing its beer, and they could well be delivering our UTVs and parts in the future! Nikola is committed to building 100 hydrogen-fuel stations a year for a total of 700 by 2028.