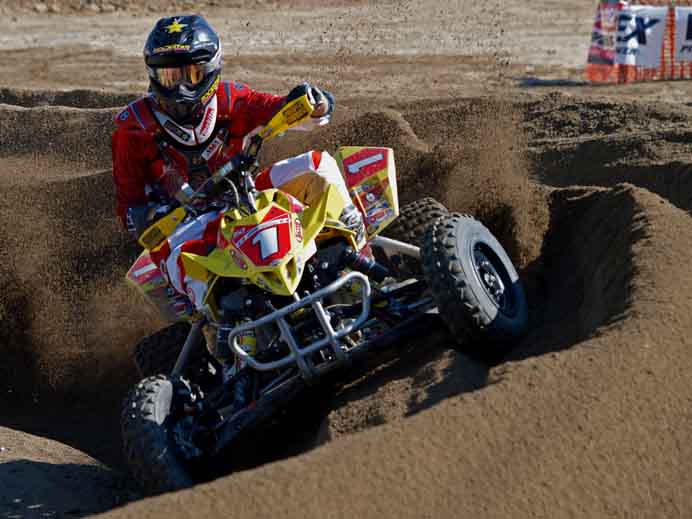 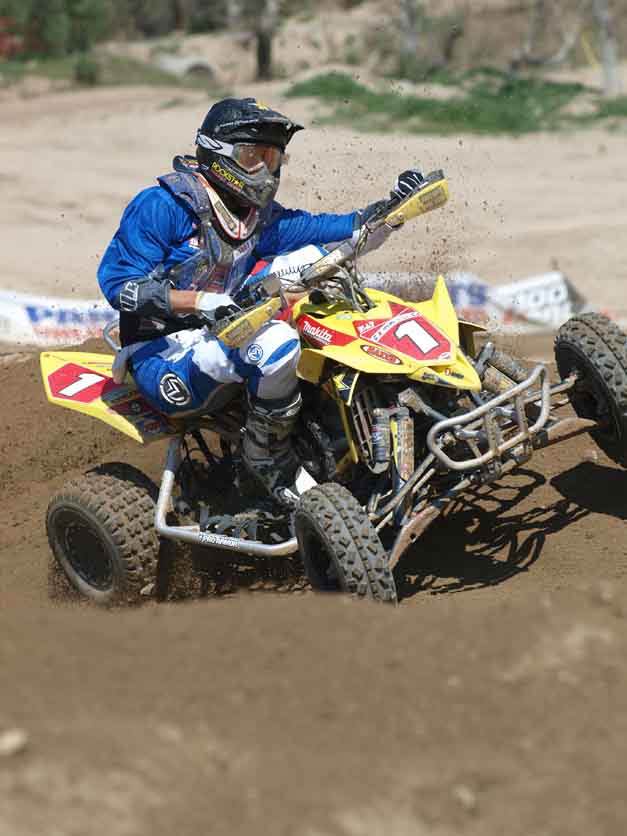 The first ATV National of 2009 is officially in the books, and it went pretty much the same way last year’s series ended. The reigning champion, Dustin Wimmer of Team Yoshimura Suzuki, won the last moto by a sizable margin to clinch the overall. But it wasn’t easy. In fact, at the start of the first moto it looked like it wasn’t going to be Winner’s or Suzuki’s day. He was buried in the pack while Monster Kawasaki’s Josh Creamer scored a monster holeshot. Wimmer’s Suzuki teammate Doug Gust had the worst luck of all, as he tangled in the first turn with Can Am rider Richard Pelchat. Those two were almost a half-lap down before they started moving. 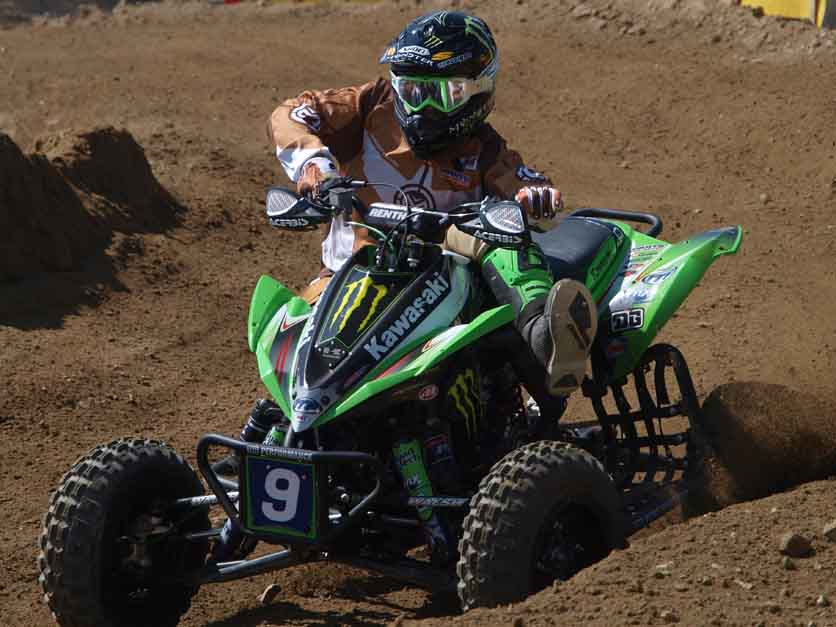 Josh Creamer had a start that most riders only dream of in moto one.
But in front, Creamer was flying. He had a huge lead for the first few laps. DASA Honda rider Joe Byrd started making up ground after a while, eventually engaging Creamer for the lead. Byrd was riding well despite a mild panic after practice that had him rebuilding a motor with parts from spare bike only minutes before the race. Eventually Creamer got away from Byrd, but then it was Wimmer’s turn. Dustin had been steadily making up ground through the first half of the race. He passed Byrd and then started harassing Creamer. In fact, several times he took the lead momentarily, only to have Creamer retaliate. The race went down to the very last lap, with Wimmer trying everything in the book. Creamer still was in front at the checker flag, having earned it the hard way. 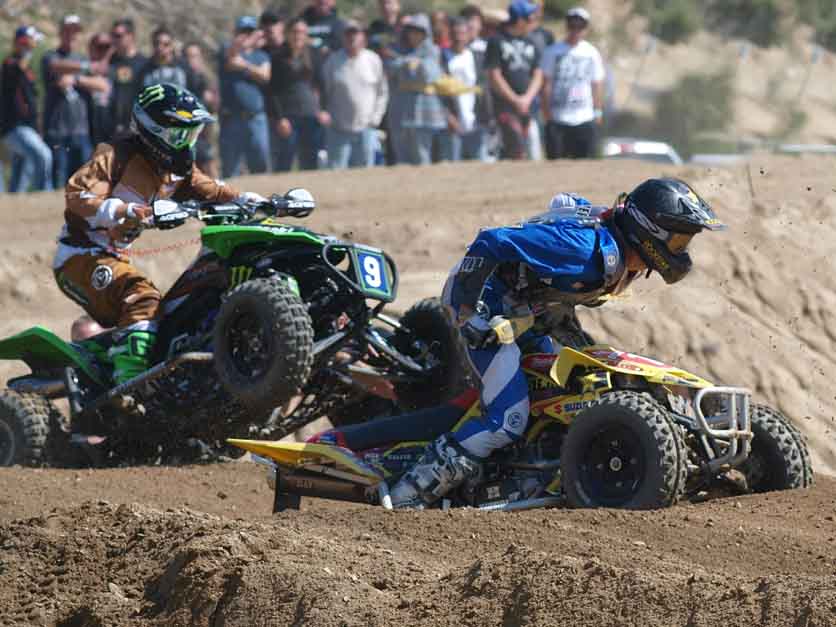 Wimmer and Creamer battled with both riding on the edge.

The second moto was much easier for Wimmer. This time he got the holeshot and it was Creamer lost in the pack. Unlike the first moto, there would be no battle for the lead this time. It was Wimmer’s race from flag to flag. Creamer cut through the pack, but got as far as third place behind Byrd, and that’s where he stayed. The most remarkable performance of the second moto was that of Rookie Thomas Brown. The new Yamaha  teamster was fourth in the final moto and that was good for fourth overall, despite his ninth place finish in round one. For more photos and coverage of the ATV Nationals, check out the June Issue of Dirt Wheels. 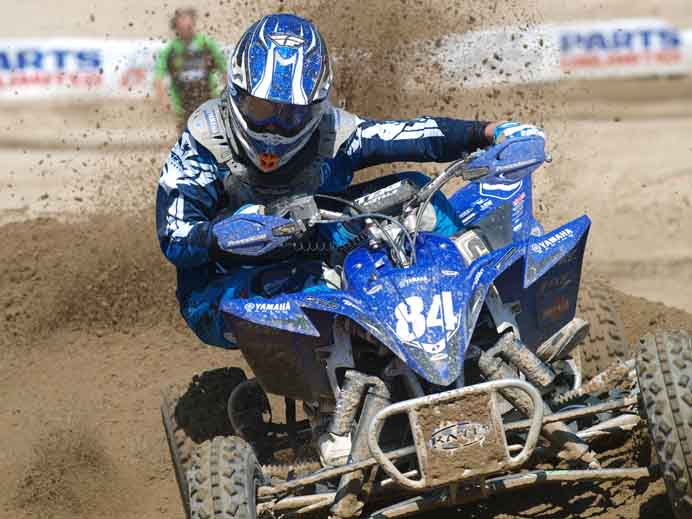 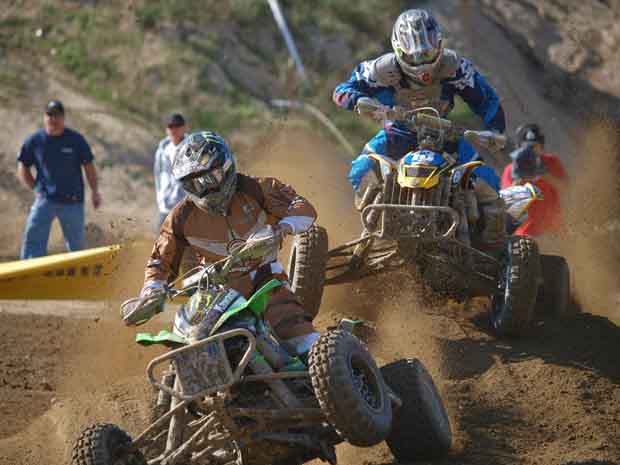 John Natalie (13) got a poor start in moto one and finished 5th. Then he got a great start and finished 10th. Go figure.
Continue Reading
Share FacebookReddItLINEWhatsAppEmailPrint