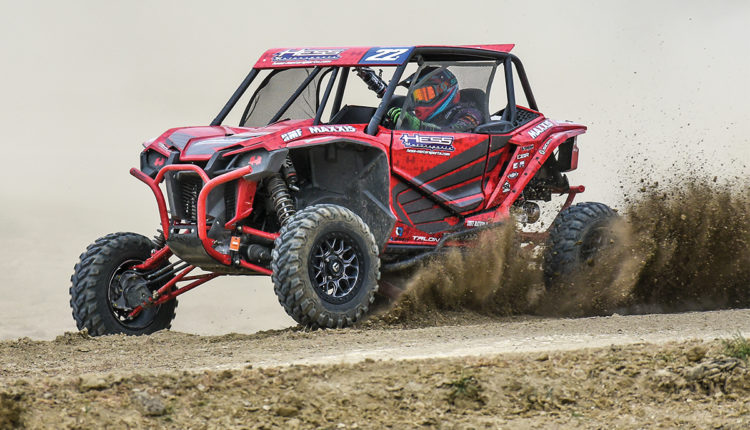 Hess Motorsports has been racing ATVs and UTVs for many years in GNCC, cross-country, motocross and short-course, and they’ve long developed products for the racing public, beginning with machining shark-fin sport ATV sprocket and brake-rotor protectors for Blingstar. Hess has a full-blown CNC operation and makes all sorts of aluminum products for UTVs, ATVs and aerospace. The company also boasts a long list of championships, both personally with Glenn and Shawn and with sponsored racers Cody and Hunter Miller, Kyle Chaney, Beau Baron and many others. Cruise the pits at any UTV race, and you’ll see Hess steering quickeners on many machines. Fed up with CVT belts, Shawn and Glenn switched to Yamaha YXZs, and now they’re concentrating on the Honda Talon 1000R/X, with Shawn racing the development Talon R in the Texas $110,000 UTV Race Series. He’s currently third in Pro N/A 1000 after two podiums in three rounds. He’s also racing in the AXCC series. 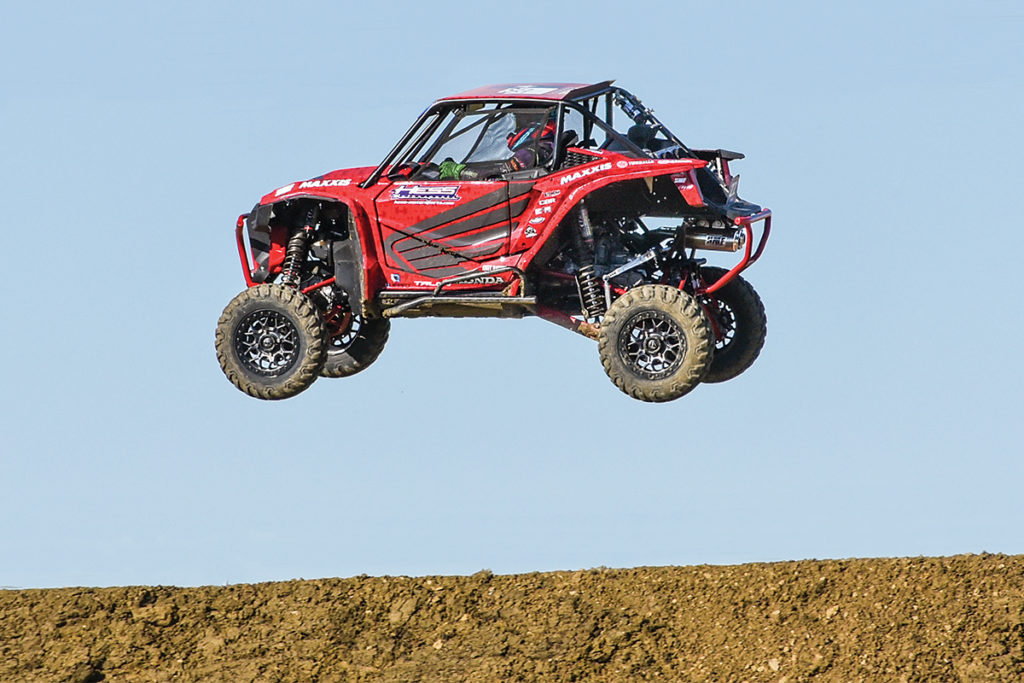 The Hess Motorsports Talon 1000R began when Shawn bought the 2019 Talon 1000R from racing buddies who fabricated the cage, roof, and bed delete kit. Since Hess builds aluminum rear torsion bars for E2R Racing, that was one of the first projects, along with developing the radiator relocate kit. Hess replaces the stock radiator with a CBR unit with two fans and mounts it behind the cab. The Talon Radiator Relocate kit will sell for $1,050, and the Honda Talon fan override switch kit is $100. Hess also relocated the Honda air box behind the passenger-side cabin and added a snorkel for the AXCC races.

Next, the Hess Motorsports Talon 1000R got the Hess steering quickener ($650) that was developed for the Talon R/X, and Shawn didn’t like the OEM plastic paddle shifters, preferring the aluminum Yamaha ones. Hess developed a button system to replace the plastic paddles and is working on a single-coiled wire harness with steering-wheel mounts. Price for that setup is to be determined. Of course, the quickener works with either the six-bolt steering hub ($50) or quick-release steering hub ($80) and the Hess dish, flat or D-shaped steering wheel ($80 each).

HMF’s exhausts come in full ($984.95) and slip-on ($499.95) with Quiet (QS) or Loud (XL) cores and choice of color (stainless steel or Gun Metal) and billet end caps. The Full 5-inch stainless-steel Titan duals increase horsepower by 7.5 horsepower and torque by 3.8 pound-feet, along with reducing weight by 5 pounds. The QS is 4 decibels louder than stock, and the XL is 6 decibels louder (at idle). Slip-on Titans increase horsepower and torque by 3 while reducing weight by 9 pounds. Hess went with the full system for maximum power and torque. 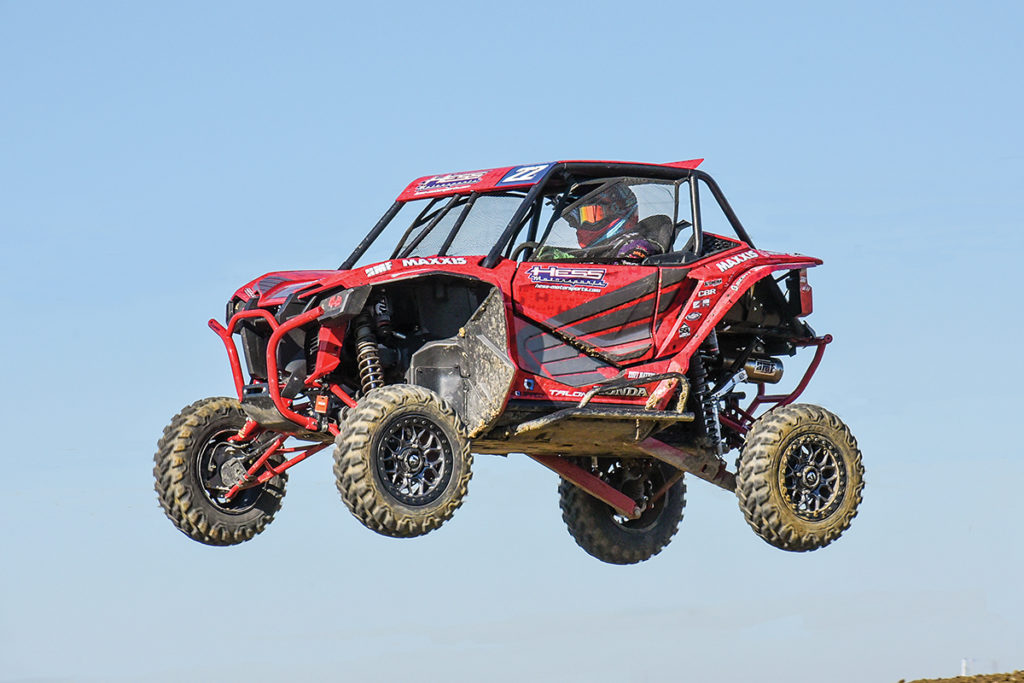 Shawn has also hired a new motor man from the drag-racing world, and Hess is developing a Talon Power-Up kit with hotter cams and head work (call for prices). New high-compression pistons are also on the way. The motor work and exhaust calls for an ECU re-flash, which is also to be determined.

Although not on the race car for short-course, Hess developed high-clearance billet radius rods for Talons, and the two-piece 7075 billet aluminum rods are designed for quick axle changes using one wrench and an axle wrench. The lowers add 2 inches of clearance, and the straight uppers are 1.25 inches thick. Seven bolts hold each side together, and uppers are adjustable for camber. MSRP is $600 for the 1000X rods. Hess also has a 6061 billet-aluminum radius-rod plate that not only adds strength to the rear suspension, it protects the rear diff, which is very vulnerable in racing situations. The Talon plate also has a 7075 aluminum tow loop and anodized plating for $160.

Shawn may test both in AXCC races. Hess also has a Talon UTV siren/horn kit ($380), which comes in handy for scaring slower cars off of the main line in AXCC and desert races. Hess is also developing Talon suspension arms for even more racing armor in Ultra-4, AXCC, BITD, Dirt Riot and WORCS. 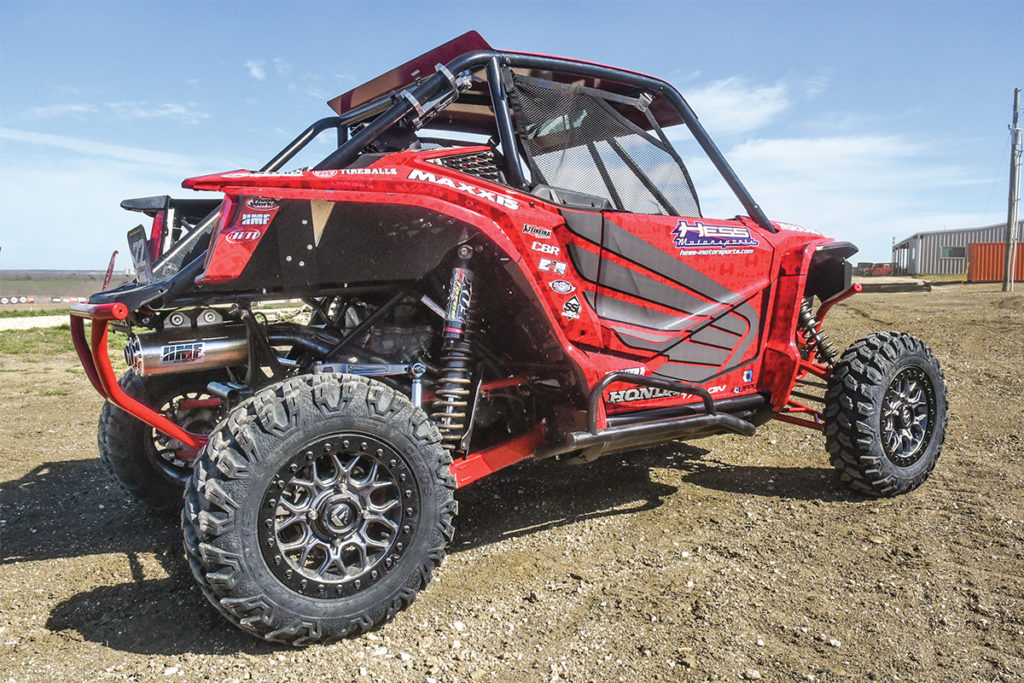