We immediately ventured out to see how the Talon vs KRX1000 vs YXZ1000 comparison turns out and help you pick which machine is right for you.  We road them in a variety of terrain at typical trail speeds with drivers of all sizes and skill levels.

The Honda has the least comfort. It has the least legroom and only has quarter doors. The instrument panel is also the hardest to read. On the good side, it has window nets, big cup holders and great passenger hand-holds.

The Kawasaki KRX has the most legroom, a great view over the easy-opening full doors and lots of extra storage behind the seats. It’s the quietest cabin. On the downside, the four cup holders soak up heat from the radiator lines running under them.

The only complaint we have ever heard about the YXZ’s cockpit is that the seats are tilted too far back, but the view out the front to the ground is still better than on any other machine and totally unobstructed. Legroom is plentiful, and the cabin heat was totally eliminated when Yamaha moved the radiator behind the passengers in 2019.

Kawasaki made the KRX work excellently at slow speeds. The Fox Shox, combined with 31-inch tall tires, float over small bumps and don’t allow for any feedback though the steering wheel or vibrations in the seats. The CVT transmission is smooth and protected by a centrifugal clutch that will prolong belt life and reduce wear and tear on components such as axles and differentials.

Although the YXZ is not available with an automatic transmission, it comes in a close second when driven at slow speeds. The shocks on our SS model can be tuned for a very plush ride by turning the slow-speed compression adjusters all the way out. Depending on the speed you want to travel, you can leave the transmission in a single gear and lug it around just fine. We have done miles on end just leaving it in third or fifth. 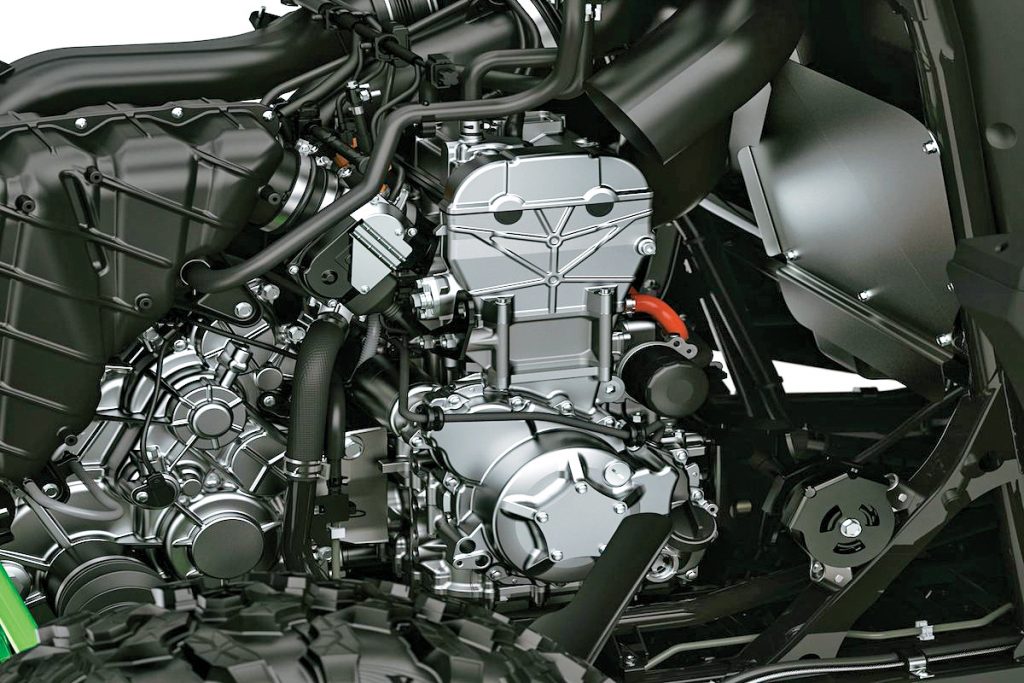 What hurts any Talon at slow speeds are the shocks and tires. The lack of sidewall on the 28-inch-tall tire can’t provide enough deflection, and the springs are too stiff. These features make it handle well at higher speeds, but make it a rough ride at slow speeds on anything other than a smooth trail, even with the shocks turned on full soft. The cockpit is the loudest of the three.

Kawasaki gave the KRX great engine braking, which is another reason it’s a great rock crawler. The motor will automatically hold the car back to 2 mph if you wish going down a steep rock face. The standard four-wheel hydraulic discs do a good job slowing the heaviest machine of the three down in normal or emergency situations.

The Talon has a repurposed anti-lock brake manifold that operates constantly as a traction-control system. So, regardless of how you are driving, the brakes are always warm, have great peddle feel and stop on a dime.

Yamaha’s standard hydraulic brake system on all four wheels works great, and the car sits so much lower than the others, it seems to be the most predictable stopper; however, the pedal feels spongy compared to the Honda’s.

All three cars have a completely different tire setup. The KRX has the burliest tires of the bunch. That, along with an electronically locking front differential, make it the best rock crawler. Good sight lines out front and over the doors, along with a steel skid plate, help it lead through the rocks. A huge underbelly and highest overall weight can get it high-centered in some situations; however, its low gear is lower than the Honda’s, and we never heard belt slip or smelled the belt getting hot.

The I4WD set up on the Honda allows it to crawl fairly well; however, low gear is not low enough in many situations.

Yamaha never intended the YXZ to be a rock climber, but it can make it through almost any situation in stock trim. The computer can pop the clutch to get up steep ledges, but the driver does have to be more aggressive to make it through the technical sections.

It’s a dead heat between the Honda and Yamaha in a drag race. The YXZ tops out at a few mph faster at just under 80 mph. The KRX hits its stride 10 mph slower. On this day of testing, we let two guys who had never driven the KRX before drive it, and neither one of them complained about it being too slow.

The consensus among all of our test drivers for each of the machines tells the story well. With reference to the Kawasaki, we overwhelmingly heard the terms smooth and roomy. It’s a slightly bigger car but doesn’t feel that way 90 percent of the time on the trail. In the rougher sections of the trail, it’s the car everyone wanted to be in. In the deep, sharp whoops, we could tell it didn’t want to skip over them but did go through with control.

In the Yamaha, the terms “exciting” and “precise” were called out the most. With our soft suspension setup, we dragged the rear in a couple G-outs, but only at very high speed. It has the least suspension travel but is the most predictable, forgiving and tuneable.

It’s hardly noticeable, so it’s not a huge issue, but compared to the others, the Honda feels rough. It has the stiffest suspension at slow speeds, and the rear end bucks in the bigger bumps. Honda made a good machine, and something as simple as a set of 2-inch-taller tires can make it great. The cockpit is tight for guys 6 feet or taller.

Kawasaki’s Teryx KRX 1000 is going to be the best fit for a larger number of riders. It’s the easiest to drive but not the fastest. It’s the best over rough terrain but also the heaviest. It still has a belt drive, but we feel it’s stronger than what comes on the CVT-equipped competition.

There’s nothing notably wrong with the Honda, and we love to drive it. And now that our comparisons are over, we will work on maintenance articles and tips for making it ride a little bit better. Honda has built a great machine, and if you are not too tall, you will like it as we do.

The Yamaha is still our favorite all-around machine that works better in most terrain. From the sand dunes to the racetrack, it out-performs the other non-turbo-equipped machines. On forest roads and tight trails, it can outperform the other two, but if you and your group strictly ride rocks or want something a little more mellow to cruise down the trail, the Kawasaki Teryx KRX 1000 should be that pick. 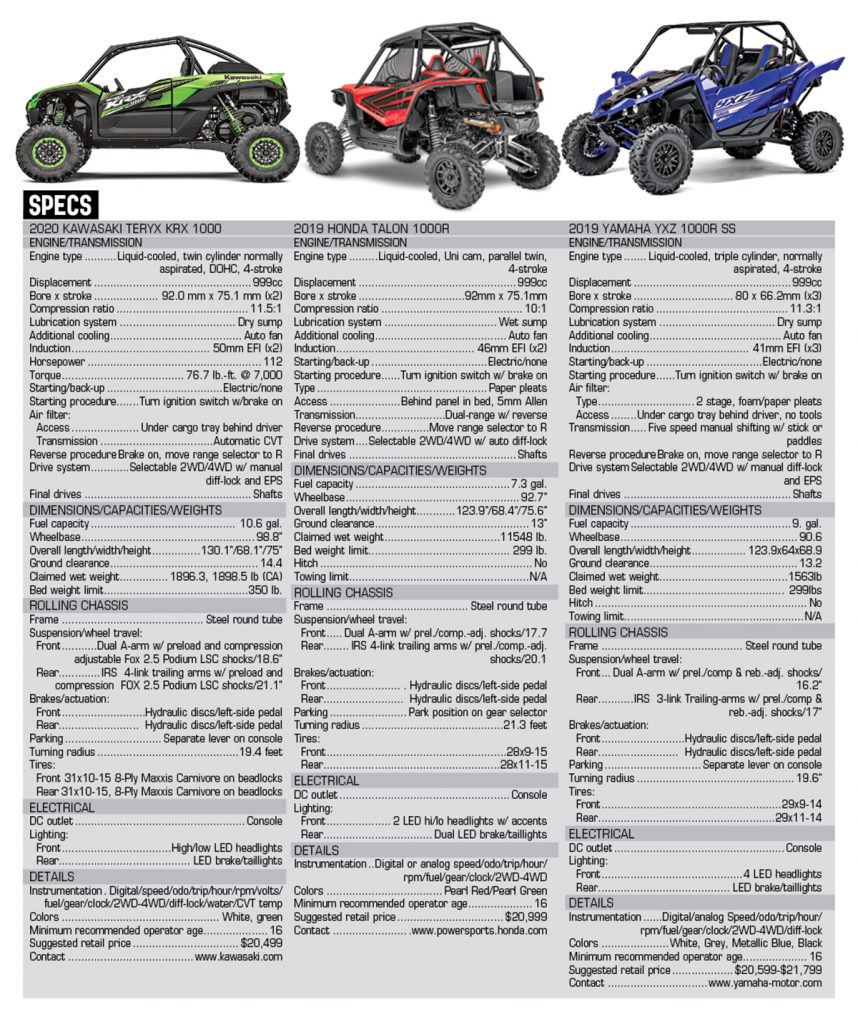 POLARIS RZR THEN AND NOW