HOW-TO: GET IT DONE IN THE MUD 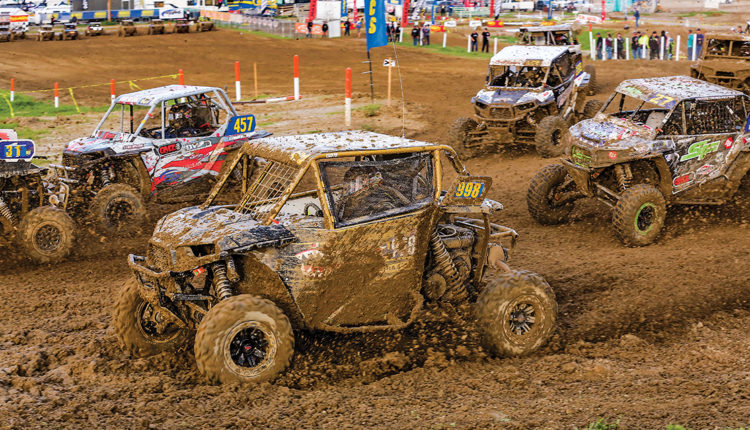 UTVs can truly be a blast in the mud. In the South, “muddin’” is so big that it has created its own culture. Thousands upon thousands of Southerners flock to the swamps and mud pits for their own kind of high-powered entertainment. With that said, an extremely muddy racecourse is a whole different story. Whether it’s a muddy GNCC race or heavily rained-on WORCS racecourse, wet weather opens up a whole new can of worms for the racing crowd.

The biggest racing issues in the mud are overheating, vision and traction. If your radiator gets clogged with flying mud, you’re overheating. If you can’t see, you can’t win. And without traction, you’re just plain not going anywhere! Another important issue to think about is increasing vehicle weight with gobs of heavy, goopy mud sticking to you and your race car.

We caught up with CST Tire’s multi-time WORCS UTV and ATV champion Beau Baron for some insight on this nasty three-letter word. The first thing out of his mouth was, “Get the holeshot. Be the splasher, not the guy getting splashed.” While this is great advice, and he manages to pull it off more often than most, we all know it’s not always possible. In the mud, it’s truly anybody’s race; however, proper setup and driving technique can better your odds. As it turns out, there are quite a few insider setup tricks, and every successful off-road racer will have a few of his or her own. While most keep secrets, we were able to drag a handful of Beau’s out of him for this feature.

By now, we all know that most of these high-strung, race-worthy UTVs tend to run on the hot side right out of the crate, especially the turbos. Now factor in mud-blocking airflow from the radiators and the higher rpm from tires constantly spinning in the slippery mud. When UTV racing first started getting popular, any time it rained, muddy, roost-filled radiators would have cars sidelined all over the track. The first, highly effective fix was relocating the radiators up out of the majority of the muddy roost spray. Nowadays, nearly every racer mounts his radiators up
in the cage behind his or her head. While the relocated radiator helps tremendously with keeping it out of direct roost, chasing down an opponent in a muddy race will still quickly end in mud-soaked radiators and the
inevitable heat-related limp mode.

On Beau’s XP Turbo race car, they separate the intercooler from the radiator to increase cooling ability and keep additional heat out of the Turbo. He runs this same foam setup on both the radiator and the intercooler. In fact, it has proven to work so well that he now runs it at every race, not just the complete mud baths. While a completely clogged radiator will stop you, even slight clogs or blockages from overwatered corners or puddles can make temperatures climb. Speaking of puddles, a few years back, while racing a four-seat RZR with a stock radiator setup, Beau was known for finding a nice big puddle to splash his radiator clean each lap just as it was reaching the dreaded “limp mode” temperature. The trick was to make sure the puddle was in a hardpack area of the course where there wouldn’t be much mud underneath.

Using dielectric grease on any and all important electrical connections is another mud-racing trick that has worked its way into everyday race prep. This super-effective grease keeps out water and fights corrosion, whether racing in the mud, riding in the swamps or just plain washing your car. It’s great for spark-plug boot connections and the ECU plug, as well as every other connecting plug you can find on a UTV.

Another factor for getting that ever-important holeshot is traction. If the track is going to be a soupy mess, Beau likes to choose a more aggressive tire with stiffer lugs and plenty of tread void. The stiff lugs act like paddles, and the tread void creates a self-cleaning effect. You will also want a round profile front, not a truck-like flat or square tire profile. No matter what you do, your UTV is going to push in the corners, but a rounder front tire with stiff knobs will help keep it to a minimum. Beau, being a diehard CST Tire guy, opts for the Stag in a 29X9-14 size on all four corners. He usually runs a 28-inch tire, but the additional inch helps with ground clearance in the mud. Running the same-size skinnier tire at all four corners drastically improves cornering, and the Stag performs very well when it gets slick.

Your UTV’s clutching setup deserves some attention for a mud race as well. If you’re running taller tires and your car’s going to be heavier, you should gear down accordingly. On the Polaris, Beau and many other racers run with only four to five bolts in the cover to speed up belt-changing times. If it’s going to be wet, you need all these bolts and the rubber seal in your cover. If your CVT belt is wet, you’re not going anywhere. Another pro tip is to run a roost visor or a makeshift one from something like duct tape, cardboard or plastic across the front of your cage. Most aluminum roofs will come over the front a little as a sun visor. You can temporarily extend the roof a couple of inches to block out some of the flying mud. Some racers will also build up a partial lower “windshield” just above the dash—anything they can duck behind to avoid roost on their visors or goggles.

The last car setup trick is to accommodate the extra weight you are inevitably going to pick up along the course. If it’s going to be a muddy mess, Beau increases the compression drastically on all four corners to account for the additional mud weight. You can also use that same coarse foam that you used on the radiator to fill between the skid plate and the engine, transmission, diff. etc. Anywhere that is occupied by foam is not going to be filled with heavy mud. Many racers also use WD40 or SC1 on the undersides of fenders and skid plates to keep the mud from sticking. While this does help a little, if it’s muddy, it’s still going to pile up; you’re just buying yourself a little more time. This method does, however, drastically help with after-race clean up when it comes time to pressure-wash your undoubtedly hammered race machine.

As Beau mentioned first, the holeshot is everything. Get to the start line early. Pre-stage as early as possible, and pick your gate or spot wisely. Always choose the straightest, shortest, and driest line to the first corner. Make sure there are no additional obstacles, ruts, etc. between you and that ever-important first turn. When staging, you can try to dig down into the dirt a little with your feet for drier ground behind your tires. Once you have created your drier, flat launching spot, roll the car back into place. Use the tires to keep it covered and dry until the flag drops. Get that holeshot!

If you fail at mission number one, be prepared to conserve your tear-offs and eat some mud while battling towards that spot you need to be in. If you have a helmet visor, run it as low as possible and look down as much as possible to block any roost that you can. If you don’t have a visor, you will need to use your hand to block what you can while scavenging for better track placement. Conserve tear-offs; once they’re gone, they are gone. If you don’t have a relocated radiator, do not directly follow the guy in front of you. Offset yourself far enough or choose different lines that keep your radiator out of roost’s way. If you absolutely have to get right up on him, be directly on him where your headlights and tires are taking the roost, not your radiator. If you are a foot to either side out of his track, a stock location radiator will be clogged almost immediately. 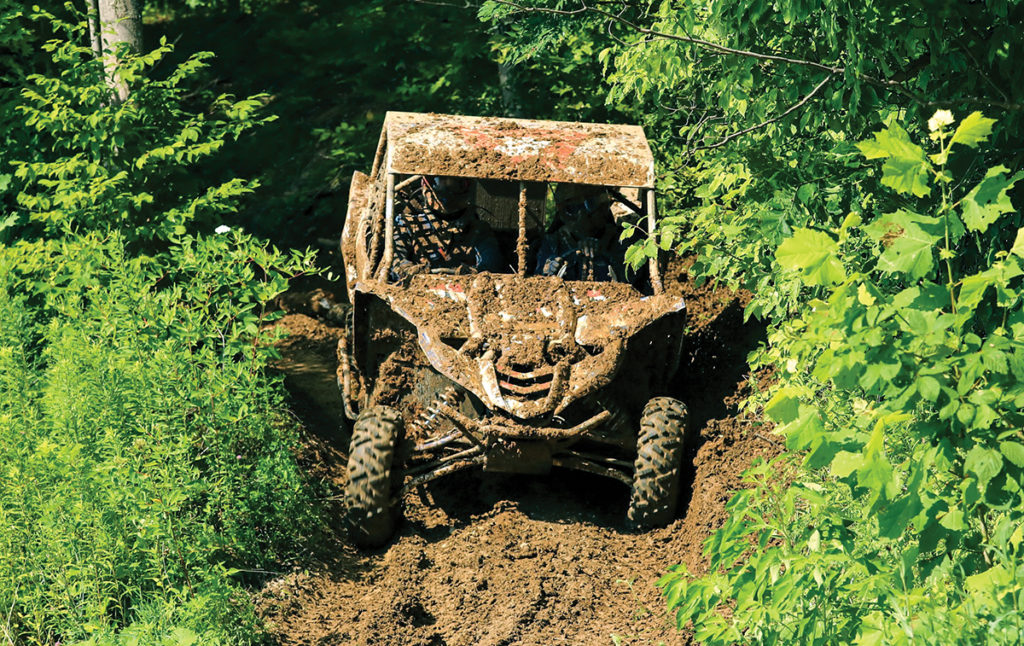 Turns are another concern in the mud. Traction is minimal, and your car is going to push in the corners. Knowing this, enter corners as early as possible and stay towards the middle or inside as much as possible. When it starts to drift, you can utilize a berm or bank to stay on the track versus taking a ride out in the cabbage. Caution should be exercised with jumps as well. Hit them as straight as possible. Just being a little sideways off the face in the mud can quickly get exaggerated to the point of catastrophe. With the minimal available traction, you can actually get back on the gas earlier with less shock or negative effect on your drivetrain.

You need to be extremely aware of changing track conditions and lines in the mud. Water is the most important ingredient when building or changing a track, or doing any other type of dirt work for that matter. So, it only makes sense that a muddy course will quickly deteriorate or change. That fast line that was just starting to get rutted last lap might be a total disaster by the next time around. Pay extra attention and watch what is going on with the racer in front of you, if there is one.

When it’s all over, no matter how it went, clean your UTV. Timeliness is your friend. Ten minutes now with the pressure washer will save you hours on Monday morning. You don’t have to get it perfect right after the race, but getting the bulk of the mud removed from your race car is crucial.

Racing UTVs in mud requires setup, smooth driving and a positive attitude. Most important, mud can hide obstacles and hazards that can ruin a ride in a heartbeat—as in Stephane Peterhansel’s case at the 40th Dakar in Stage 7’s Bolivian mud bog.