Hulsey Repeats at OMA Round Eight 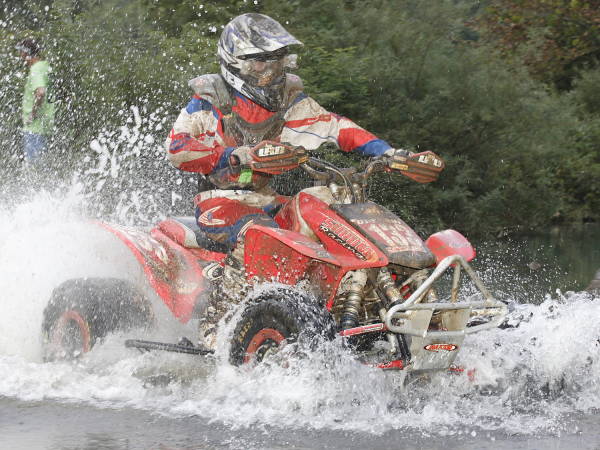 Story and photos by John Gasso The Parts Unlimited OMA Nationals series presented the Johnny Signs Ozark XC at Byrd’s Adventure Center near Ozark, Arkansas. Missouri Hare Scrambles Champion Bryan Hulsey had another close battle on his hands, but the Dirtworks Moose Racing Honda emerged with victory number two and a small lead in the series championship battle. Former series champion Rob Zimmerman could not keep his Team Honda Moose Racing Honda out front and settled for second place after a broken steering linkage left him struggling to keep the machine on course. Morton, Illinois racer Shane Gaunt had an early lead aboard the Aupperle Racing Moose Racing Honda, but a creek crossing mishap left him playing catch up with a flat tire. Gaunt took fourth place after privateer Todd Senger put in a strong charge to bump his Kenda Tires Honda on to the podium at his first OMA Nationals event. According to Hulsey, “it was a good, hard fought race between Me and Rob and Todd. All three of us battled pretty hard.” The Duncan Racing Duro Tires Honda mounted racer made the right moves at the right time to claim his second consecutive OMA victory. “I found a line around both of them there at the end,” he said with a smile. “I was able to stretch out the lead from there. It was a lot of fun.” Second place was not where Rob Zimmerman wanted his Team Honda Research Clarke machine to finish, but a mechanical failure made the last lap and a half difficult for the Ohio pro racer. “The start was pretty good,” he recalled, “but then Shane just blew right in there and got me on the second corner. Me and him both got Hulsey and Shane just started checking out big time. We got to the last crossing back, right before we come underneath the bridge again, and Shane was screwed up, bad. We all got him there.” It seems Gaunt had some trouble with water and rocks. “I was riding real good,” said the Aupperle Racing Gaunt Motorsports backed racer, “then coming back through underneath that bridge I was going way too fast and I got water splashed up on my goggles. My tear-offs were just smeared so I couldn’t see and a rock knocked me off my line. Then I got hung up on a rock. I had to get off and, you know, get it off there.” Gaunt could not overcome the delay, and a flat tire just added to his discomfort. He finished fourth after nine laps. Meanwhile, Zimmerman put in some fast laps battling with Hulsey, but recalled “right before we come back underneath the bridge my steering was all squirrelly. I ended up just babying it the last lap. Then Todd caught me in a tight section. He put a hard charge right on me to pass me, and it was like, one of us was getting a tree.” Zimmerman’s determination and experience put him through the space, while Senger collected a tree for his efforts. St. Louis based series newcomer Todd Senger found himself on the Johnny Signs Ozark XC podium after a day long battle that he called “awesome.” The racer who only lists Kenda and his wife and kids as sponsors said “first time on an OMA and I loved it. I come down with Bryan Hulsey and tried to do something. I had a great time. We were battling back and forth, me, Bryan, and Zimmerman. It was awesome.” Senger had his Honda TRX450 in the lead pack all day and battled to the end with Rob Zimmerman. Senger recapped his race saying “I lost my rear skid plate and I didn’t know it, then I lost my rear brake. Coming down a hill I clipped a tree. I wasn’t for sure what was going off, but I knew my nerf bar was rattling, so I just kind of settled in and kept a fairly good pace. I caught Zimmerman on the last lap. He was having problems. I tried like heck to get him and we ended up coming together and I got the short end of the stick. Here I am, third.” The battle for the Parts Unlimited OMA Nationals series continues to stay close with Hulsey taking a slim lead after this race. Zimmerman is determined to get back on top and take back the championship, but Hulsey and Gaunt are doing their best to spoil those efforts. The OMA Nationals series provides great racing in the old school woods racing tradition, and the competition is fierce. Check out omanationals.com for more information and get yourself out to the next race in this series where racers like newcomer Todd Senger wear a big smile after the race and say “I loved it.” This is offroad racing.