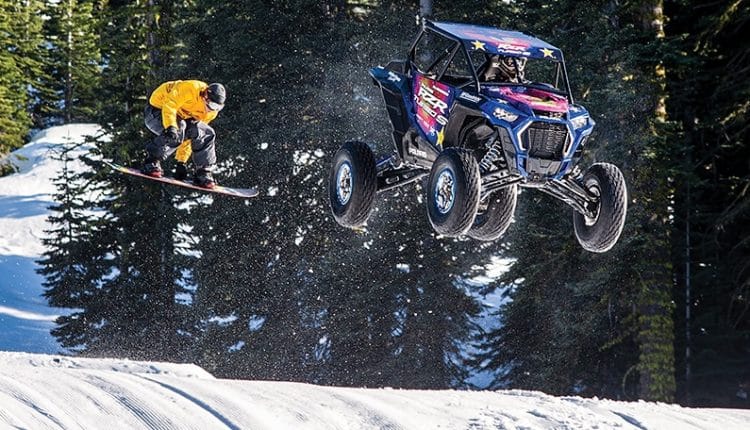 Polaris, RJ Anderson and Mad Media have teamed up to create some of the most exciting UTV action videos ever seen. The team got together again for “Snow Blind,” the first in a series of videos that showcase the remarkable abilities of the Polars RZR Turbo S with Anderson at the wheel.

Here’s what you need to know about “Snow Blind,” the first video in the “Visions” series.

The “Visions” video series was inspired by Anderson’s feeling about the capabilities of the RZR S. “I envisioned this thing dominating any terrain,” said Anderson, so the “Visions” videos take Anderson and the RZR S to outrageous settings.

WHERE WAS THE VIDEO MADE?

“Snow Blind” pits Anderson and the RZR S against the steep, snow-covered slopes and high elevation of Donner Ski Ranch. Located in Norden, California, near Lake Tahoe, the ski resort is a favorite of skiers and snowboarders. Anderson is the only person who has ever attacked its slopes in a UTV. Before you get too inspired, know that UTV access to the slopes is prohibited.

WHO IS THE SNOWBOARDER IN THE VIDEO?

The video is full of scenes of huge UTV jumps and big snowboard air, often with the UTV and snowboarder dangerously close during the action. The stunts called for a snowboarder as willing to push the limits as Anderson does in a UTV, so Norwegian pro snowboarder Torstein Hormgo was recruited for the video. Hormgo has earned medals in numerous big air and slopestyle competitions and is frequently featured on the “Shredbots” YouTube channel. In the “Snow Blind” video, Hormgo rips some 45 foot airs.

HOW FAR DID ANDERSON JUMP THE RZR S IN “SNOW BLIND”?

Some of Anderson’s jumps in “Snow Blind” were over 100 feet and required takeoff speeds of 55 miles per hour. Pulling off stunts like that on snow takes serious skill and a driver with tons of confidence in his vehicle.

HOW SPECIAL WAS THE “SNOW BLIND” RZR S?

The RZR S Anderson drives in the video is modified, but considering what you see the machine doing, it’s surprising how stock it is. It’s all about proving the RZR S engine and chassis is up to the task, even when the task is way beyond normal UTVers’ needs. Here’s what make Anderson’s the “Snow Blind” RZR S special.

CHAPARRAL MOTORSPORTS ANNOUNCES 2019 SIDE BY SIDE EXPO