Kainan Baker is the teenage sensation in Texas Outlaw and MidAmerica Outdoors UTV Race Series Pro NA 1000 and Pro Turbo classes. He progressed rapidly in the 2020 Texas series and won a Pro NA 1000 round and got two more podiums in the last three rounds. With new, radical RS1s, he came out swinging for 2021 and won the first three Oklahoma races and leads the MidAmerica Pro NA points. Baker won three Texas rounds in a row and was second in the July Texas round, but a bad first round has him trailing Texas Pro NA points leader Ronnie Anderson by 10. Here’s an inside look at Kainan Baker’s RZR RS1s.

The Bakers got four RS1s for the 2021 race season, took them all apart, cut them down and did the race builds using a whole box of TIG-welding rods. Kainan’s dad has been a tool and die maker for 23 years, but Team Bacco spent the winter trimming trees for power lines. They took Low and Park out of the RZR Pro XP transmissions, which shaved 8 pounds. Baker and Jason Summer built the race cages, chopped frames, nerf bars and bumpers. Sandcraft was called upon to upgrade the driveshafts, motor mounts and front-diff parts.

Mo-Tec’s John Reed did the engine ECU computers and tunes, and Kainan is running a normally aspirated 1180cc D&M Racing big-bore engine in his Pro Turbo car. Entire wiring harnesses were even scrapped and bare-bones harnesses were fabricated with a “no wire or weight we don’t need” attitude. Baker built the exhausts using HMF head pipes and shaved down the CVT cover. STM primary and secondary clutches replaced the stock clutches, and CMI’s RZR filter and bed delete shaved more weight.

Based in Owasso, Oklahoma, Baker went to the sprint-car shop in Tulsa to figure out what they could use in Kainan’s race cars. Howe Brand steering quickeners are lightweight and $100 each, so they went in, along with La Joie ([704] 795-9474) sprint/NASCAR seats. Allstar Performance sprint-car torsion bars were built into the chopped frames and rear bumpers, and Baker made all of the radius rods and tie-rods. Lightweight Kieser bead-lock rims replaced stockers. Titanium bolts replaced many stock fasteners. TPI Performance aluminum oil catch-cans went in both RS1s. With lowered frames and seats, there was no room for OEM fuel cells, so Baker fabricated aluminum cells for the right-side cockpit and incorporated the RS1 switch panels into the cells.

Kainan’s Pro Turbo RS1 got HCR Racing’s RZR Dual-Sport 72-inch A-arms and trailing arms, but his Pro NA remained 64 inches wide with Carr A-arms. Both got Keller ball joints ($599.80) and CMI hubs and big-brake kits, and both RS1s got the optional RCV axles ($3100). Both also got Fox Factory 2.5 Podium RC2 shocks tuned by G-Force, and Kainan runs Landrum Performance shock springs. The RC2s are piggyback front and a remote reservoir rear, and Baker runs the Nost N10Z Pumper cone-valve adjusters. Nost claims the N10Z Super Muscle System to be better than Fox Live Valve technology, because its system is proactive and Live Valve is still reactive. Instead of shims, cone valves are used for plushness but also have blow-off for sharp impacts.

While the big-engine Pro Turbo-class RS1 hasn’t proven as dominant as his Pro NA 1000 RS1, plans are in the works to build an RS1 turbo. The wildest part about both RS1s to meet minimum-weight rules for the various short-course series was that the Bakers had to add 230 pounds of ballast to each! They put a 90-pound plate under the seat, a 60-pound square bar on the rear bumper and an 80-pound bar in front! 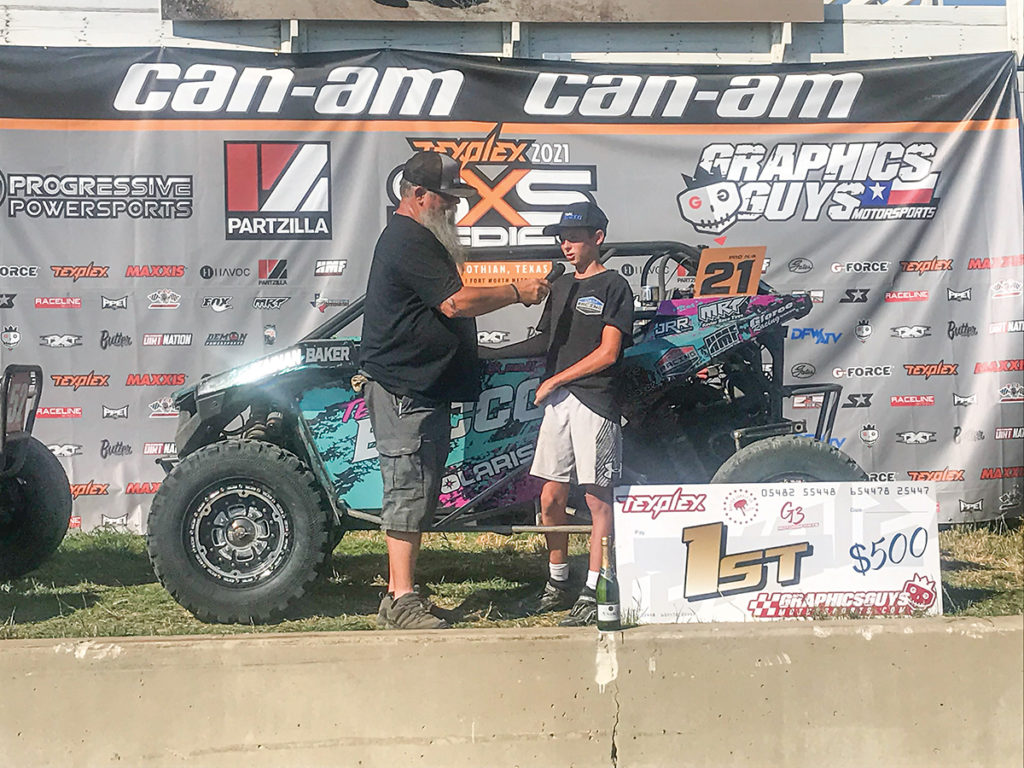 How Big Is the ATV & UTV Market in Canada?