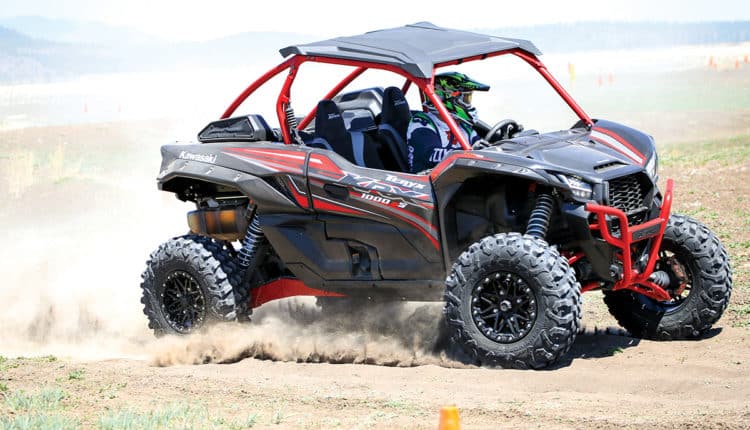 WHAT IT IS: KAWASAKI ELECTRONIC CONTROL SUSPENSION

Kawasaki Electronic Control Suspension (KECS) is Kawasaki’s version of the Fox 2.5 Podium Live Valve adjust-on-the-fly suspension tuning for the Teryx KRX 1000 eS. We got a chance to demo drive the KRX 1000 eS at the Mormon Lake UTV Jamboree, but the demo course was a rudimentary circuit laid out in a cow pasture, so we decided to do a product evaluation and save the full test for more challenging terrain and speeds.

Kawasaki’s KECS connects four Fox 2.5 Podium Live Valve piggyback shocks, which replace 24-position low-speed compression adjusters on other KRX models, with a Bosch electronic control system with the first-ever six-axis IMU on a UTV. Drivers get to choose between ride modes—Soft, Medium and Firm—and the KECS analyzes inputs from the fuel-injection ECU and a steering-angle sensor, plus speed, vehicle axis and terrain to determine damping for each shock as needed. Engineers tuned the system to deliver optimum performance and ride comfort. KECS stiffens outside shocks during cornering, front shocks during braking and back shocks under hard acceleration. KECS also works with Fox Internal ByPass (IBP) position-sensitive damping to deliver a plush ride in all but the bump zone at the end of travel. KECS also upgrades the cockpit to a 7-inch, TFT, color, LCD, digital screen with three selectable brightness levels and back lighting, plus selectable suspension, meter, audio, camera/photo, vehicle info and menu pages. We’ll only deal with KECS and suspension here.

Electronically controlled Live Valve compression adjusters replace the 24P-LSC mechanical units, and harnesses connect to the KECS semi-active damping control unit, which in turn has sensor wires connecting the various sensors, KECS control toggle and outputs to the LCD instrumentation. There are high-end marine-grade connectors and harnesses throughout.

When you turn the ignition key on the KRX 1000 eS, ride height adjusts according to the KECS mode selected. We started out in Soft and did some laps with the TFT on the suspension monitor. All shocks start with 2 of 10 with outside or front shocks going to 3 on turns and braking. Ride quality was super plush on the cow-pasture chop. Next, we went to Medium, and all shocks increased to 5 as a baseline. Hard cornering and braking took outside or front shocks to 6, and only the outside front shocks went to 7 in some throttle-off turns. Ride quality on choppy terrain remained high. On Firm, ride height increased slightly, and all shocks went to 8 as a baseline. Hard cornering and braking took outside and front shocks to 9 , with the chassis staying level throughout. Amazingly, ride quality remained very good on chop in Firm mode.

While KECS isn’t an upgrade option for current Teryx KRX 1000 owners, those interested in the KRX 1000 should consider going for the KRX eS model. Compared to the $22,999 Trail Edition with comparable KQR roof and sport front bumper, the KRX eS doesn’t come with a rear bumper, Warn VRX45 winch or nerf bars, but the KECS on-the-fly adjusters level the ride to enhance high-end performance and bottoming resistance while maintaining ride quality not found on Live Valve versions from other manufacturers. The readout and selectivity of the KECS LCD screen are excellent, although we’d still like to see GPS mapping and group-ride functions.