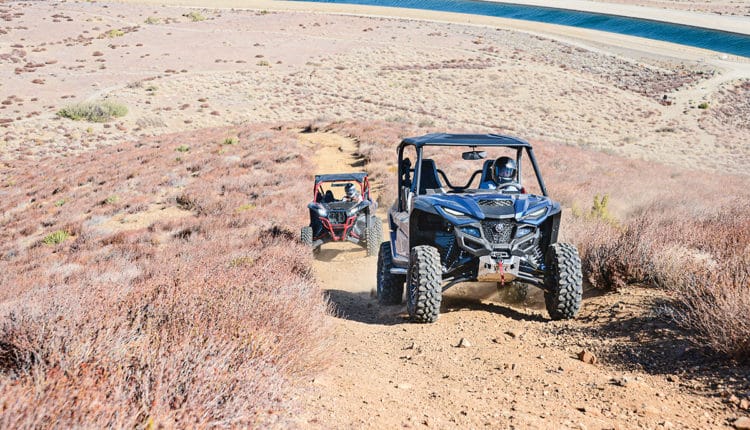 Say you have a budget of around $25,000 and you are in the market for a full-featured machine, but turbos or back seats aren’t on your wish list. What you do want is a quality product you can get in and drive without thinking about much else. At the top of our list of recommendations would be the Kawasaki Teryx KRX 1000 eS or the Yamaha Wolverine RMAX2 1000 Limited Edition so we did a Kawasaki KRX vs Yamaha Rmax2 shootout to see how they compare. We literally have thousands of miles of seat time in both of these machines and have hardly had to turn any wrenches other than for periodic maintenance. With that in mind, it takes about twice as long to change the oil on the RMAX as it does the KRX, but it can still be done in under an hour. The KRX has quicker CVT belt access, too; however, Yamaha gives the RMAX a 10-year belt warranty, and we have never had the need to change or even inspect the belt on the RMAX. The KRX’s belt is strong, but its clutch weights wear out after about 2000 miles and need to be changed. That’s been our only complaint about the KRX in two years of driving it.

Test rides at the dealership are rare, so about the only thing you can test is the seating position before you buy; however, you can look into a demo day at your local ride area. Kawasaki and Yamaha both have schedules on their respective websites. During Kawasaki KRX vs. Yamaha Rmax2 shootout we found both companies did a great job in cabin comfort, as well as security with full doors. The RMAX has to be opened from the inside, while the Kawasaki has handles inside and out. The driving position of the Kawasaki is a little more laid back, while the Yamaha has more of an upright seating position. You can see over the hood well while seat-belted in either machine. Kawasaki’s cockpit definitely has extra room for bigger guys. You could be 7 feet tall and still fit in this thing. Furthermore, both seats are adjustable in the KRX. Sliding both seats up is a great way to access the extra space behind the seats this Kawasaki provides. 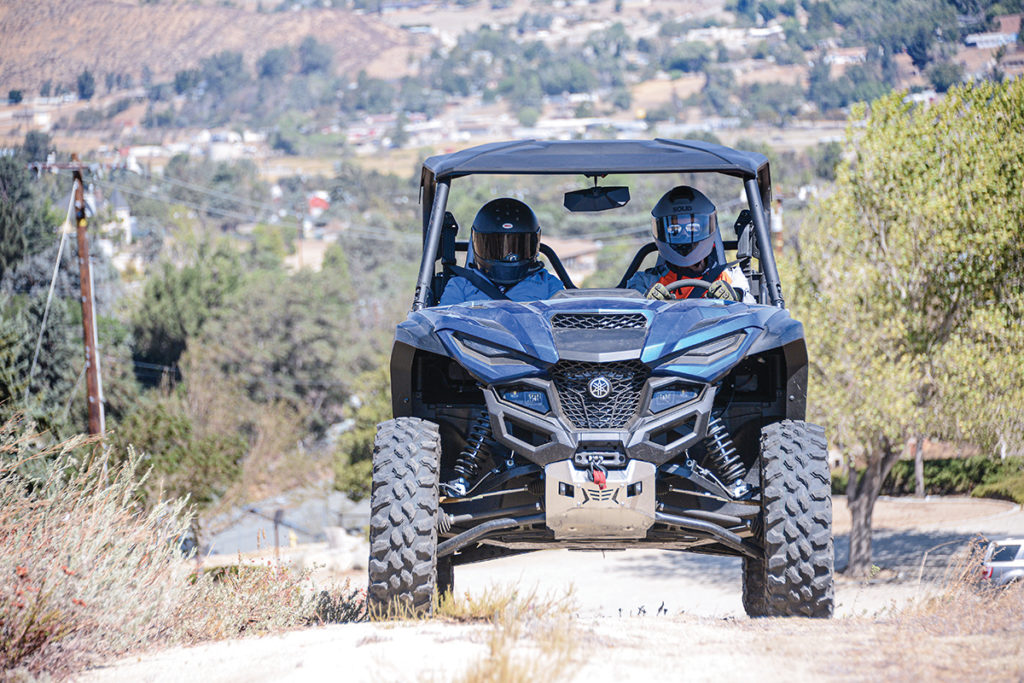 Legroom in the RMAX is ample for guys over 6 feet, and there’s plenty of shoulder room, too, for the bigger guys. Two things we don’t like about the Kawasaki’s cockpit are that the front set of cupholders gets hot and the sharp edge of plastic near the cupholder digs into your leg if you are driving aggressively. We fixed the digging issue by installing PRP’s kneepads. PRP also sells a great firewall bag that helps take advantage of the extra space behind the seats. 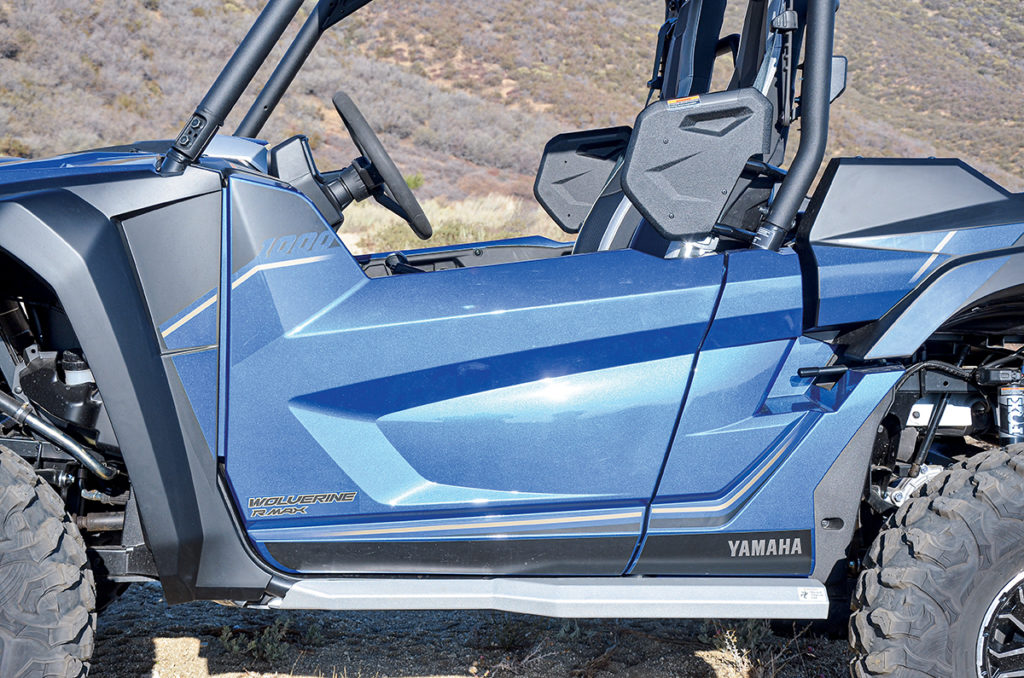 Our Kawasaki KRX vs Yamaha Rmax2 shootout also looks at how the machines’ features compare. These eS and LE models are the most feature filled, especially when it comes to the cockpit. New for this model, Kawasaki added an LCD screen behind the steering wheel that will display the usual stuff like speed and distance. Additionally, this display will show you what mode your shocks are in, CVT belt temperatures, and, if you are at a stop, it will show you maximum and average speed, as well as specific belt temperature in degrees. Over in the Yamaha, the new screen is a full-service GPS unit called the Adventure Pro, and it has too many features to list. We like the lap time counter, the mapping feature and the access to thousands of miles of trails in the places we like to ride. Additionally, you can pull the GPS screen out of the car and play with it in the house, hotel room or in the truck to prepare for your next ride. This is the most detailed GPS system offered in any UTV. One thing that neither machine comes with, surprisingly enough, is a backup camera. The screen in the Teryx KRX ES has provisions for it, and Kawasaki sells multi-view cameras that cost $75 each and mount on the front or rear bumpers.

Other features in the RMAX include D-mode, which is a dial that sets the acceleration output in one of three choices. Kawasaki has a similar feature with a low power switch. We like the Yamaha’s much better, as each mode still gives you full power, whereas the Kawasaki’s low mode does not. As for suspension adjustments, both machines give you three choices of ride quality. Both adjustment systems perform equally well, and you can feel a noticeable difference in the ride while in the specific setting.

The suspension segment of our Kawasaki KRX vs Yamaha Rmax2 shootout revealed the machines’ biggest differences.  Their individual suspension systems are not apples to apples. Both units offer in cab, three-position-selectable suspension capabilities, but that’s where the similarities end. The Kawasaki system is a Live Valve set up that allows the computer to give some input depending on factors such as speed and steering angle. Kawasaki uses dual A-arms up front with 18.6 inches of travel, while out back it has trailing arms with 21.1 inches of travel. This system is similar to what is found on RZRs, X3s and the Honda Talon. For the RMAX, Yamaha supplied A-arm suspension on all four corners. There are 14.2 inches of travel up front and 16.9 inches in back. This is a stronger setup closer to what Can-Am Commanders have, as well as similar to what a Polaris General XP has. In addition to less wheel travel, the RMAX has a 1-foot-shorter wheelbase. The A-arm suspension gives the RMAX a more predictable ride, more precise cornering and more control. Kawasaki’s setup gives you more big-bump absorption. So, if you like to hit the bumps at high speeds, the KRX would win that category for sure. But, if tighter terrain riding is more your thing, the RMAX does it better. In the small-to-medium stuff, it’s hard to pick a winner. Both machines are smooth and plush, especially with the in-cab-adjustable suspension. We did find that if you use the Firm setting in the RMAX, the ride height stays a bit higher than in the other settings. On the KRX, its Live Valve suspension keeps it from bottoming in the rear like the standard model does.

Both of these machines use a very similar engine design with twin, parallel cylinders pumping 999cc of naturally aspirated power. Additionally, both of these machines are built with durability in mind and have the extra weight to show for it. Top speeds are limited to 69 mph on both cars; however, the Yamaha RMAX gets there about two seconds quicker. Again, the three power modes that Yamaha supplies in the D-mode system work very well and are fun to play with. On the Kawasaki, we have no use for the low power mode, as the machine is mellow enough without it; however, if you were teaching someone to drive for the first time, the low power mode would come in handy. Over on the Yamaha, if you did have a new driver or say a worker or rental customer driving this machine, you could deploy the “Turtle” key located under the hood, which limits speeds to 35 mph. We think this feature would be good for every UTV.

Like we stated, the KRX’s power is mellow. It’s not slow or dull. In fact, it’s still very exciting to drive. It’s just not going to win many drag races; however, that power is reliable, smooth and a great match for this car in most situations. The Yamaha’s powerplant is a lot more exciting, especially when you turn D-mode selector to Sport. Power is instant and aggressive. We took the RMAX on several high-altitude rides, and it had more power than we needed, even on steep hill-climbs. It would have no problem navigating any terrain, even sand dunes. The Kawasaki is sluggish in the sand.

Yamaha gives the RMAX a 10-year CVT belt warranty. That, along with Yamaha’s proven reliability record over the last couple of decades, certainly needs to be taken into account. We’ve driven RMAXs on several multi-day rides and haven’t needed to turn a wrench on the machines. Even at the end of those rides, you don’t hear a rattle or squeak. The Wolverine is built tough and can navigate any trail you take it on. The only time you have to slow down is if there are big bumps in the trail. For everything else, it can handle it better than the KRX. The KRX is also super reliable, and we have reported very few issues with it. It’s comfortable, roomy and capable of tackling any type of terrain. If you are a bigger guy or have lots of big bumps where you ride, we’d suggest the KRX for you. 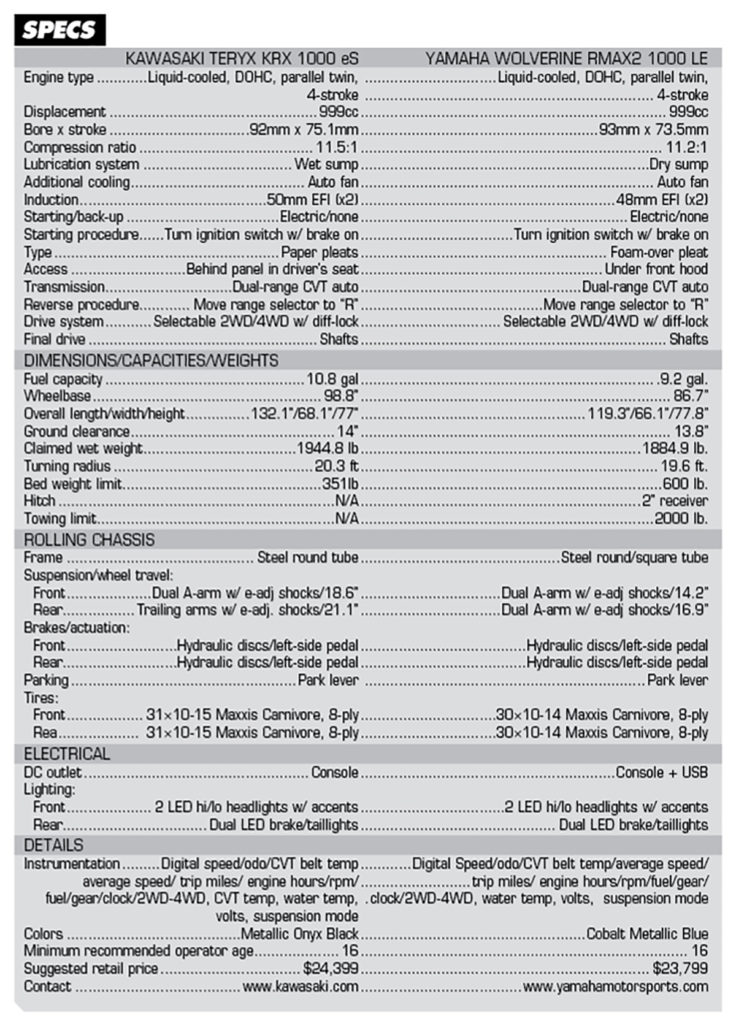