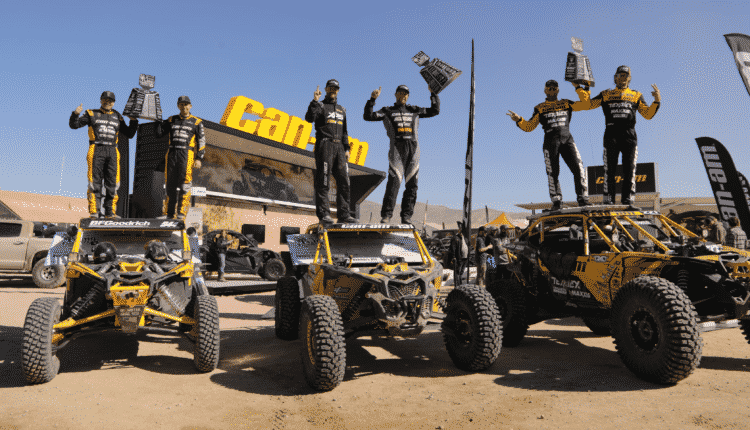 Can-Am Off-Road factory racer Kyle Chaney rocked the 2021 Can-Am King of the Hammers UTVs, crossing the finish line first and claiming the top spot on the podium. Chaney’s blazing victory marked the second triumph in a row for a Can-Am Maverick X3 at the toughest single-day race in the world. Completing the course in a total time of 3:47:49, Chaney was followed by Can-Am drivers Cody Miller and Phil Blurton, securing a second brand podium sweep in a row for King Of Hammers UTVs. 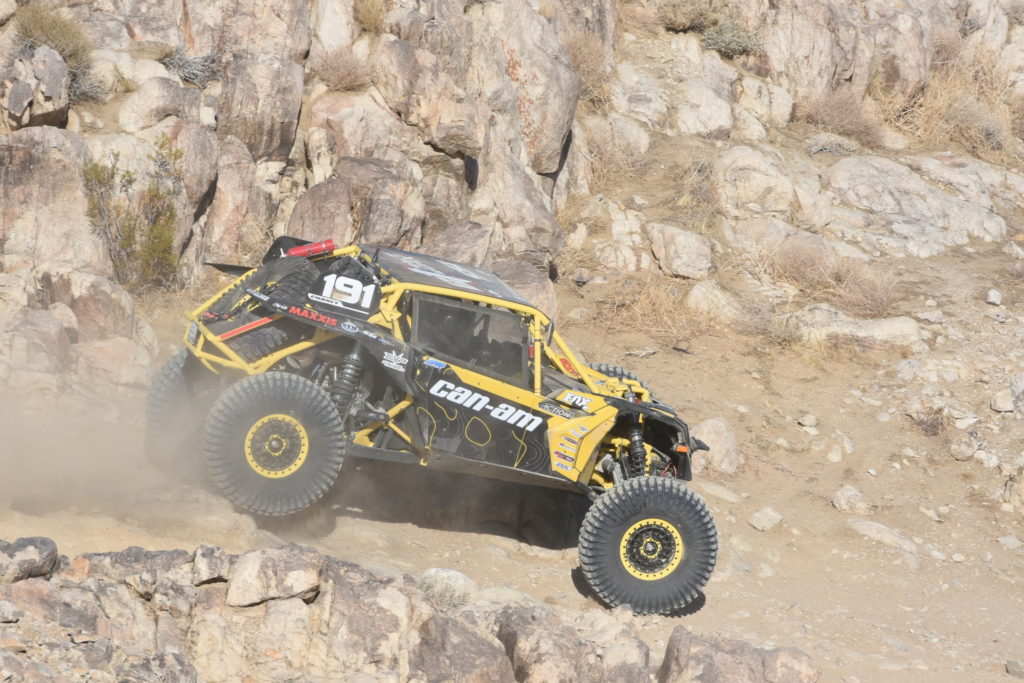 “Well, we just won the King of the Hammers! It feels awesome! My co-pilot Scott and I worked together all day, didn’t make any mistakes, and everything went smoothly. I wanted to get in the rocks in the top three, and we did. We just stayed smooth the rest of the way and brought her home. The Can-Am Maverick X3 was awesome. That machine impresses me, it just keeps impressing me. It never lets me down,” said Kyle Chaney.

Can-Am Maverick X3s swept the podium with Chaney leading Cody Miller and Phil Blurton.  Chaney has been on a roll, winning $10,000 earlier in the week at the Toyo Desert Challenge and now earning $25,000 by winning the UTV King of the Hammers. Last year, Chaney was on a different kind of roll, dislocating his toes and breaking his foot when his UTV rolled off a cliff and onto him.  Despite that adversity, he still managed to finish second in 2020, giving the competition a glimpse of what sort of resolve they should expect from the Ohio-based racer.

“I wanted to make it through the desert loop” Chaney confessed. “It had a bunch of nasty chop in it and I knew making it through that part of the course was going to be key today. I knew I could get through the rocks. But the desert was going to be tough. I knew we could bring it home.” Chaney completed the 121-mile course in just three hours and 47 minutes. The course started with a desert lap that combined tight, twisty ridge lines mixed with high-speed lake beds.  From there the difficulty level ratcheted up as the competitors had to traverse brutal rock-crawling trails including Jackhammer and Bender Alley; trails that challenged both team and machine. 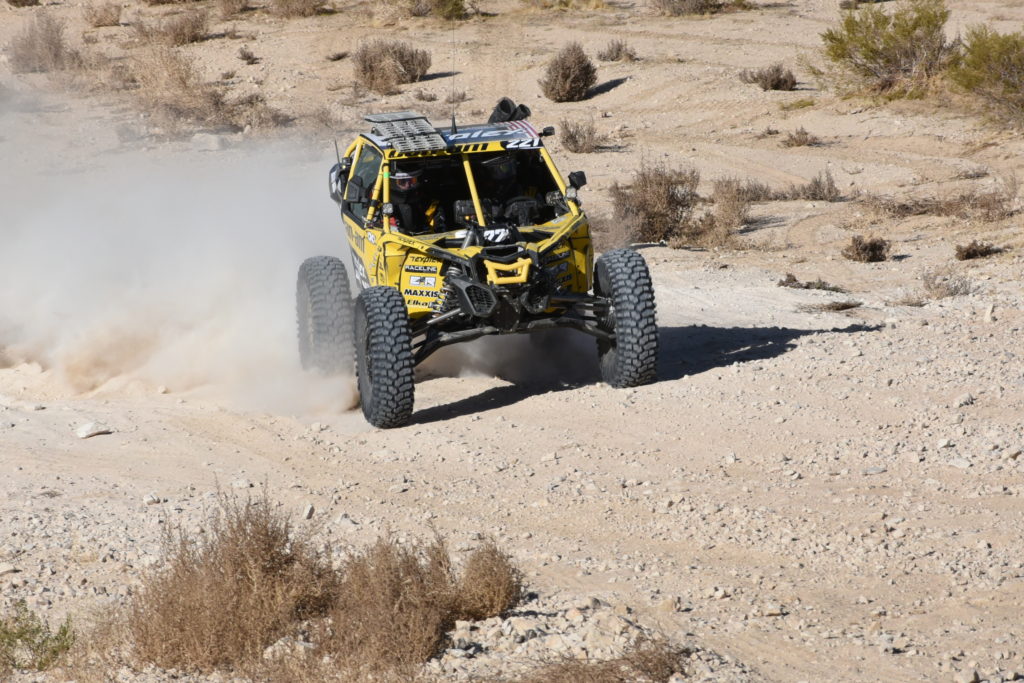 Cody Miller, 2020’s fast qualifier and brother of last year’s UTV winner Hunter Miller, came in second place, finishing just under 12 minutes behind Chaney. “I was headed up Jackhammer and I saw Kyle coming down and I knew at that point that he had a very serious lead,” Miller said at the finish line. “We pushed really hard but couldn’t catch him.” The Millers are relatively new to rockcrawling and King of the Hammers, but have taken to the unique race. The two Texans have a long history racing for Can-Am, winning championships in GNCC and WORCS in the past.  “King of the Hammers is just a great team event,” Miller explained. “You know, a lot of the races that we run are just the driver versus the driver. Out here it’s the team versus the team. All the way from the pits to the passenger seat. It’s a major group effort. And it just brings everyone together and it’s such a good family environment.”

Phil Blurton rounded out the podium, a follow up on his third-place finish from last year and his second-place finish at the Toyo Desert Challenge B2 vs B3 Grudge Match this past Saturday. “There’s nothing like it,” Blurton answered when asked about King of the Hammers. “You know, about every two weeks we’re racing somewhere different and this race is just so unique. You’re in the desert doing 100 miles an hour and then you’re in the rocks doing three miles an hour and next thing you know you’re stuck on the rocks and out of the car winching. It is a combination of everything.” Blurton finished 19 minutes back from Chaney, losing valuable time when he got a flat tire and discovered that his jack had flown off the car. “We had to pull up on a rock to get the tire off the ground and get it swapped out.”

Finishing just off the podium was second generation racer Ronnie Anderson with his older brother RJ navigating.  The brothers made it to the very last turn of the race when they caught a rut and barrel rolled their  RZR Pro XP Turbo three times.  Fortunately, the two were unharmed, and still managed to cross the finish line under their own power.  The top ten also included fast qualifier Jay Shaw in fifth (driving Hunter Miller’s winning car from 2020), two-time winner Mitch Guthrie Jr in seventh place, and 4400 driver Jason Scherer in ninth. 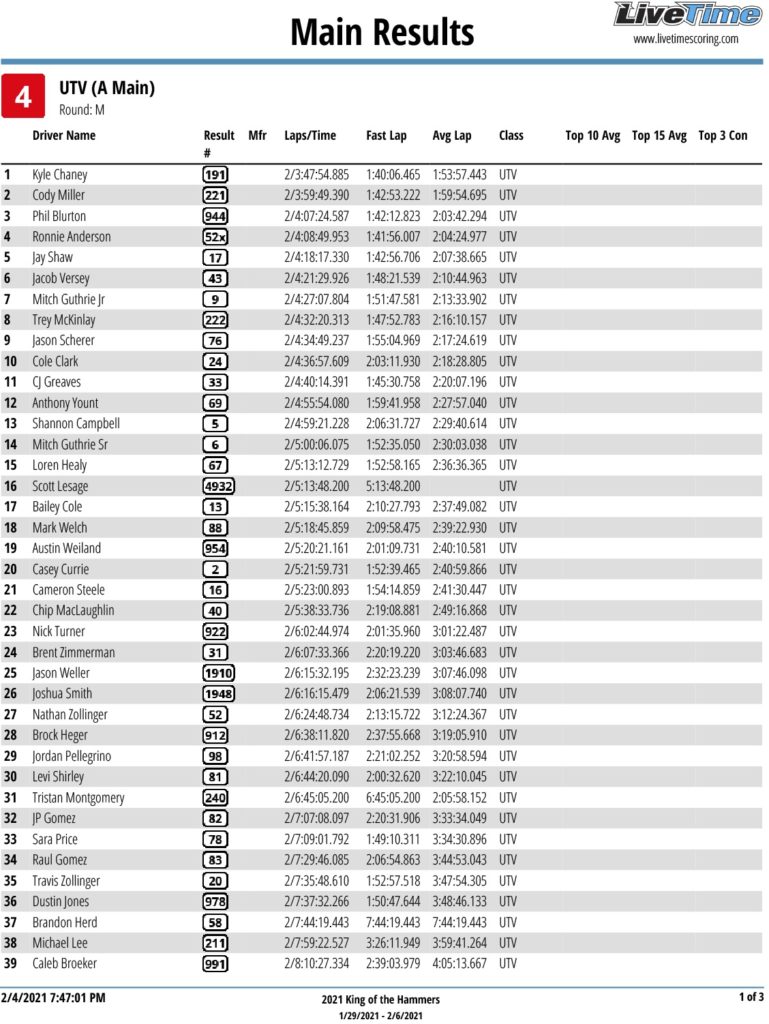 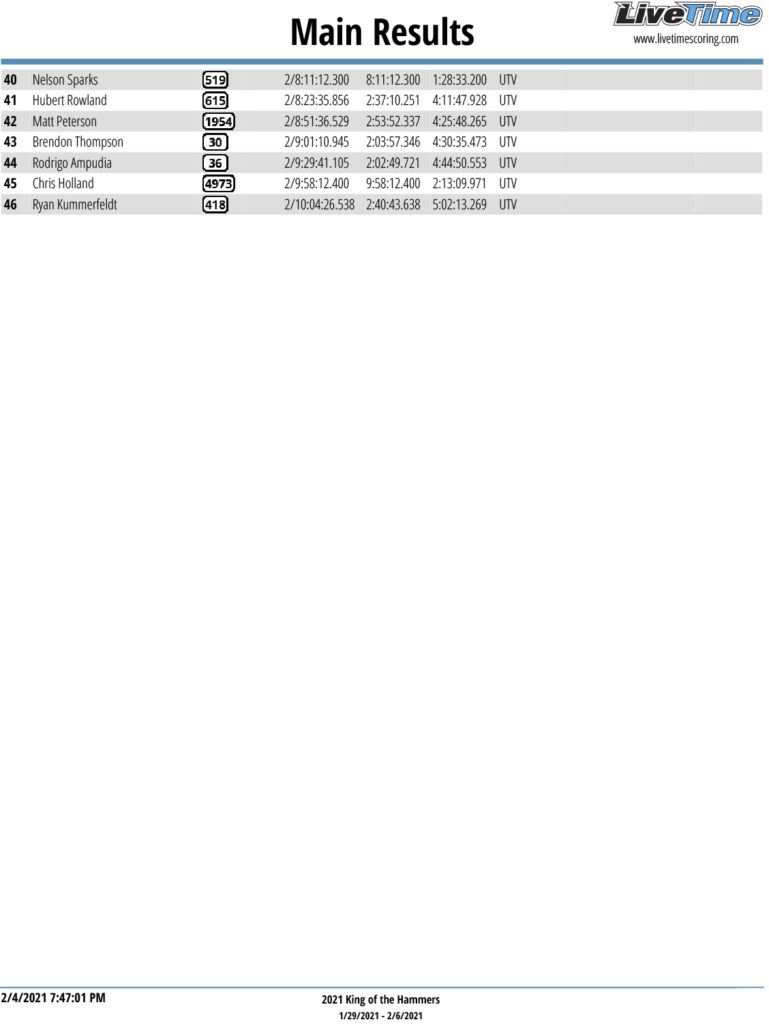 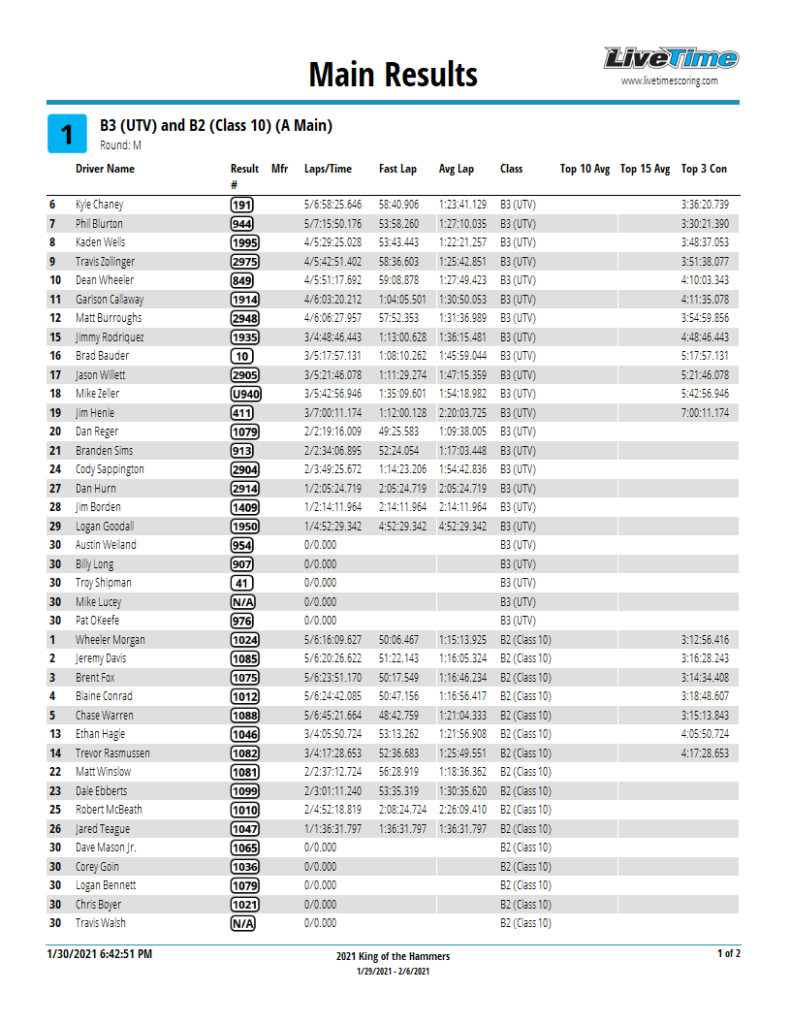 Past winners of KING OF HAMMERS UTVS