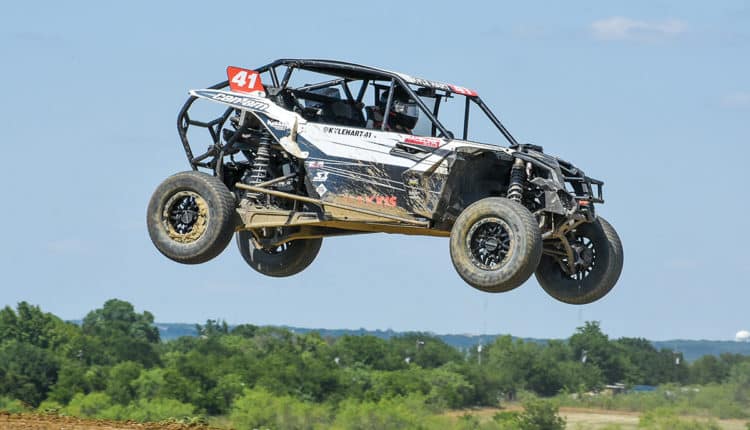 Until UTVs return to the Grand National Cross-Country racing series, Kyle Hart will be the defending UTV XC2 Pro champion. Kyle and Collin Truett actually tied in points (118) and wins (two each), but Hart had the better tie-breaker results, with both in Polaris RZRs. Kyle and father Marty Hart raced Yamahas at the 2019 High Lifter Short-Course MX and went 1-2, with Marty winning. Kyle Hart’s AXCC/Short-course X3 was built for the 2019 American Cross-Country racing series (AXCC). Kyle won the Pro Turbo championship in his first attempt with one overall win, two seconds and two more top fives in the seven-round series.

With the 2020 AXCC series scheduled not to start until March, the Harts decided to contest the $110,000 Texas UTV racing series and converted the Can-Am to accommodate short-course racing. Kyle handily won the first two Pro Turbo rounds against the Miller Brothers and Truett, but the Millers came back to split wins at the third and fourth rounds, which were separated by the COVID-19 lockdown. Itching to get back to racing, UTV Action went to cover the fifth round and the Hart X3.

Pro-level racing is much more than one man (or woman) and one machine. Marty is Kyle’s coach, tuner and spotter, and he draws on a lifetime of racing on two, three and four wheels. Marty was on the powerhouse Honda ATV racing team from 1983 through 1986, and he won the AATVA National Motocross Championship in 1984, 1985 and 1986 on a TRX250R. He also won the 1984 Baja 1000. He then won the 1989 Mickey Thompson Grand Prix 250cc Quad Championship and spent the 1990s racing MTGPs in Super 1600 buggies and Superlites, the forefathers of UTVs. Marty was also the 1990 Score Class 5 champion.

Already a legend, Marty caught the rock-racing bug. Since Louisiana has more bayous than boulders, Marty built his own rock obstacle course and learned that sport, winning two championships in Supercrawl and UROC series in the early 2000s. He also won a 2005 Terracross gold and the 2007 World Series of off-road racing. Marty racked up Pro-Lite truck titles in 2008 with CORR/TORC and 2010 in Lucas Oil Off-Road.

Kyle followed into Pro-Lites and won his first race at the age of 16. The Harts then got into UTV racing, with Marty mentoring on machine preparation, race craft, focus and picking off one racer at a time.

Being based in Louisiana, the Harts went with S3 Powersports for a custom racing cage. S3’s for-sale custom ABC pillar cage is $995. Kyle deleted the X3 bed and protected the rear with S3’s rear bumper ($495). For the AXCC series, Hart armed his X3 with S3’s Tree Kickers, which are made of 1.5×0.095-inch tubes with 3/16-inch curved mount plates for $525 a pair. There are 10 powdercoat color choices, too. S3’s heavy-duty 6160 billet-aluminum tie-rods with clevises and chromoly heim joints are $295 a pair. S3’s chassis weld-in gusset kit is $225, and the transmission brace is $125.

S3’s X3 64-inch high-clearance A-arm kit is $1,149, and it is made of high-strength chromoly tubes with oversized ball-joint cups and shock mounts. Lower arms are arched for clearance and have triangulated braces, brake-line mounts and powdercoating with a lifetime structural warranty. Heavy-duty bushings are $120. Out back, Hart went with S3’s weld-in gusset kit ($109) to strengthen the OEM trailing arms, along with high-clearance lower radius rods ($395). The kit includes billet-aluminum rods, four Uniballs, eight misalignment spacers and four snap rings.

S3 is also a Double E Racing and Evolution Powersports dealer, and Kyle used the E2R rear torsion bar ($650) and links ($150). The arms are made of 7075 billet aluminum with four link-mount points, and they greatly improve handling and reduce body roll. Kyle used the second-softest setting at the first two rounds. Evo’s Stage 4WRI kit includes bigger injectors, the ’18 fuel pump, and a waste-gate actuator with 20 pounds of boost. This kit pumps up the output to 220 horsepower and makes Kyle’s X3 the fastest Turbo on the track.

The Evo Stage 4 kit with Evo exhaust is $1,149, and the ECU re-flash removes engine-speed TQ limiters and brake to start. It raises top rpm from 8,300 to 9,000, improves throttle response, and sets the fans to activate at 165 degrees. This kit requires fuel with at least 95 octane.

Kyle Hart’s AXCC/Short-course X3 uses CBR’s radiator relocate kit, and he built the front bumper and shock tower brace. Shocks are upgraded to Fox Podium RC2 2.5 front ($1,745) and 3.0 rear ($2,225). Ball joints are replaced by Keller Racing ball joints ($533.96), which have hardened bodies and 4340 stems, a lifetime warranty and replaceable boots. They are adjustable and greaseable, making them the best stems on the market. Kyle uses a Hess steering quickener ($650) with 6061 aluminum housing and a 2:1 (or 1.5:1) steering ratio. It’s machined to use the stock steering wheel, but Hart uses a Hess quick-release six-bolt adapter ($80) and a Momo wheel with leather.

For data acquisition, Kyle uses an Aim MX UTV gauge ($599) with lap-time and temperature read-outs. The GPS receiver and Clonass data compute lap times, and it has a huge 4GB memory for downloading race data to a laptop via WIFI. A carbon fiber dash houses the Aim and OEM gauges and switches, and Kyle and Marty communicate via Rugged Radios. Hart removed the seats and installed a single Beard/Can-Am Racing suspension seat ($529.99), and a Jaz vertical drag-racing fuel cell sits where the passenger’s feet would be.

When you win the first two rounds, you don’t want to change anything. Marty said that the Millers kicked it up a notch to win the third and fourth rounds, and that Kyle would bicycle when he tried to run their pace. They set out to stiffen the George White-tuned RC2 shocks. George at E2R prepared another set of RC2s with the new Nost Suspension N10Z cone-valve adjusters. Instead of the standard shim-and-spring adjusters, Nost N10Zs are shim-less cone valves designed to greatly ramp up bottoming resistance and allow low-mid-speed adjustments for a plusher ride.

Designed originally for dirt bike forks and shocks, N10Z adjusters have now been designed for Fox Podium UTV shocks. The Nost website explains the concept using the analogy of diving into shallow water. If you put your palms together for a smooth water entry, you will hit the bottom. Spreading your arms out in the water to prevent hitting the bottom mimics a more progressive shim stack. To understand the Nost cone-valve, think Terminator 2’s T1000 played by Robert Patrick. The T1000 turns its forearms into swords for a plusher water entry, then immediately morphs the blades to an open umbrella for way more bottoming resistance. Nost claims the N10Z “Super Muscle System” is better than Fox Live Valve technology because it is proactive and the Live Valve is reactive.

Friday was spent tuning the Nost/Fox shocks. On Saturday, Kyle won the fifth round with a 1-2 day to beat Cody Miller’s 3-1 with Hunter third (2-3), so Kyle extends his Pro Turbo points lead with three rounds to go. But, he was still getting up on the bike in rough corners, so the Harts and E2R have more tuning to do. 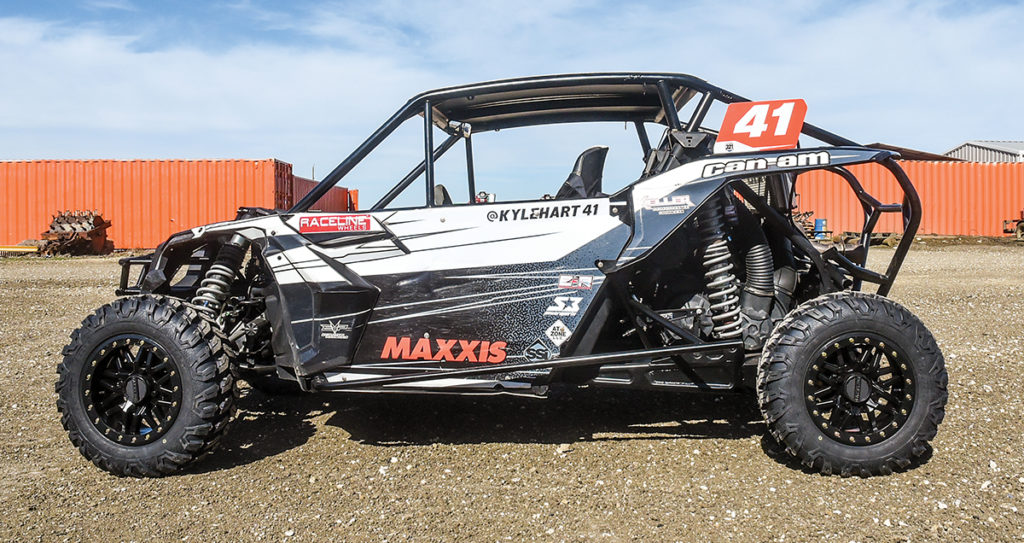 GUIDE TO THE OREGON DUNES