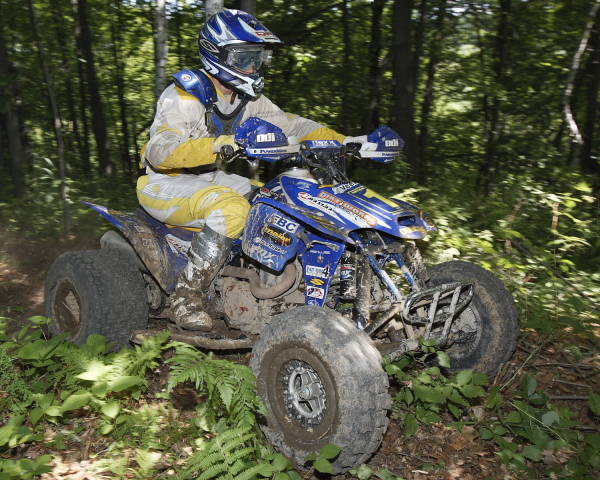 Bryan Hulsey made a late race pass to take second place away from Shawn Hess at the Parts Unlimited XC near Hixton, Wisconsin.
The CMJ raceway near Hixton, Wisconsin was home to round five of the Parts Unlimited OMA Nationals series. After thirteen laps of twisty trails that included a large motocross track it was Kyle Martin taking the checkers aboard the Dirtworks Racing Honda for his second consecutive OMA Nationals victory. “Start to finish. That’s the way I like it,” said Martin after taking the holeshot and leading the entire race. Duncan Racing Dirtworks Honda rider Bryan Hulsey completed his thirteenth lap three minutes later, followed by the Houser Racing Quad Tech Honda of Texan Shawn Hess to complete the Parts Unlimited XC podium. John Pitts was the final pro rider to complete thirteen laps of the course, bringing his Moose Racing Dirtworks Honda through the scoring tent at one hour and fifty five minutes. Brad Booth rounded out the top five, finishing five seconds ahead of Pitts, but one lap short on the total. It was fourth place for John Pitts aboard the number four Dirtworks Motorsports Honda at round five of the OMA Nationals.
According to Martin “it went well. Just how you want it to go.” The Missouri racer rocketed to the holeshot and never looked back. The Roll Design EBS Honda was ahead of the pack all day, with Martin running an apparently flawless race. “I pulled the holeshot, put a little lead on them, made some dust for them, and I had a pretty clear track ahead of me,” said Martin with a big smile. “A pretty open, fast track, so I was able to put some time on them. Start to finish. That’s the way I like it.” Dusty trails were no problem for Kyle Martin at the Parts Unlimited XC held near Hixton, Wisconsin. Martin won the event with a three minute margin after leading from start to finish.
The Aupperle Racing Lonestar Honda of Illinois racer Shane Gaunt was close to Martin early in the race, but Gaunt left the race after completing only seven laps. “I felt really good early, then, I don’t know what happened” recalled Gaunt. “I was really hot, then I went from being hot to being cold. Then I started feeling weird and I got blurry. I had to stop. I was just feeling really wobbly. I had to come back up here. I finished off that lap and stopped at the ambulance.” Gaunt was checked out and released from the medical team, but his race was another disappointing dnf. Shane Gaunt battled for second place at the Parts Unlimited XC until illness took the Illinois teenager out of the event. Bryan Hulsey had some battles throughout the race and finally put his Moose Racing Vee Rubber tires Honda on the podium. “Off the start I was around fifth, behind John (Pitts),” recalled the reigning OMA Nationals Champion. “We battled a little bit through the motocross. Then John missed a line and that’s where I got him on the first lap.” Hulsey was using his motocross experience to his advantage, as many of the other racers had serious misgivings about the motocross section. The jumps were big, and many harescrambles racers prefer to keep the wheels on the ground instead of flying through the air. After dispatching his Missouri riding buddy Pitts, Hulsey was on the move. He said “I caught Shane (Gaunt) and rode behind him for a little bit until he started dropping off. Then he let me have it.” With Gaunt out of the way Hulsey had his sights set on the Hess Motorsports IMS Honda of Shawn Hess. “I ended up catching Shawn Hess,” recalled Hulsey, “and got close enough to him that when he pitted for fuel is when I passed him.” Hess was unaware of the close proximity of Hulsey, and while the Texan stopped for a splash of fuel, the Moose Racing Dirtworks Motorsports Honda motored past.  Hulsey said “once I got by him, he hung with me for about a half a lap. Then I guess maybe once we hit the motocross I must have dusted him out.” Flying through the motocross portion of CMJ raceway near Hixton, Wisconsin was Kyle Martin and his Dirtworks Motorsports Honda. The Missouri racer lead from start to finish, adding win number two in a row to his 2009 OMA Nationals tally.
Third place went to a young man who said “it was a good race. I really had a lot of fun out there.” Shawn Hess put his Elka suspension Quad Tech Honda in second place, but he knew Hulsey would be gunning for him. After waiving off a late race stop one lap earlier Hess decided to take a splash of fuel, but Hulsey was hot on his heels. The Dirtworks Motorsports EBC Honda of Hulsey blasted by Hess, setting the Texan in third place. Hess battled back with his IMS Honda, but could not reel in the Smith goggles ODI grips machine of Hulsey. “We had some good battling going on,” said Hess. “I was up in second, had been in second and third all day.” Unfortunately for Hess, early in the race his day was made a little more difficult than it should have been. “The first lap I clipped a tree and twisted my stem,” he lamented. “That made it pretty rough in the tight stuff.” Even with his machine suffering a steering malady, Hess said “all in all I had a good day. We got back up on the podium with this one in third and got things going in the right direction. Just move forward from here and see how the rest of the season turns out.” The Parts Unlimited XC, Co-sanctioned by district sixteen, was a bit dusty, and a bit hot. But, as John Pitts reminded us, “it wasn’t muddy or anything.” The OMA Nationals season has hit the half way point, with five races completed and five more to run. Racers continue to be challenged by the course offerings created by Bill Gusse and his OMA Nationals crew, but they also continue to have fun. This series offers a laid back, family friendly atmosphere with courses that will challenge everyone to be a better rider. Check out omanationals.com for a schedule and more information about the remainder of the 2009 racing season. This is offroad racing.