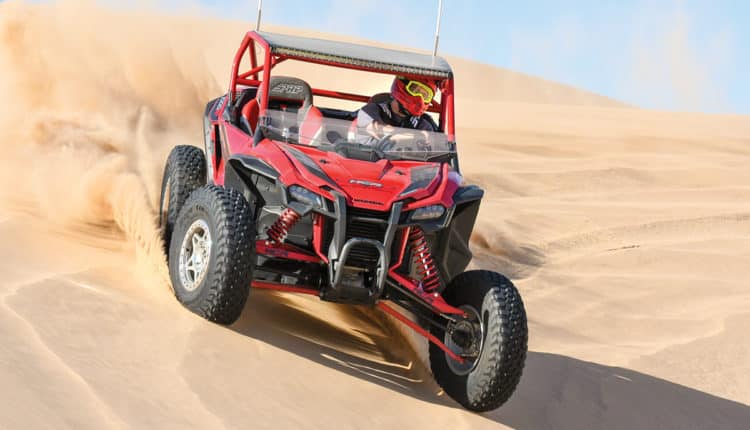 As I write this, the Suislaw National Forest has opened parts of the Oregon Dunes at Winchester Bay for OHV recreation, and the Reedsport Chamber of Commerce confirms that Dunefest is on for July 21–26. Here comes dune season ! Next month’s Sand Sports Super Show, which is on for September 18th–20th at the Costa Mesa Fairgrounds, officially kicks off the countdown to dune season in California. I can’t wait to get rid of this COVID cabin fever by losing myself in the vast Imperial Sand Dunes, aka Glamis.

I’m sure all of you avid duners can’t wait to hit the big dunes of Glamis, Dumont, Oregon Dunes National Recreation Area, Idaho, Sand Hollow, Little Sahara (Utah and Oklahoma), and Colorado’s North Sand Hills Recreation Area. After being COVID cooped up for so long, it’s going to feel so good to strap into your UTV and stretch its and your legs. It’s going to feel great to camp and congregate with family and friends, and to ride the bowls in a big conga line. Slinging sand is in our blood, and we have a lot of slinging to catch up on.

Growing up, whenever life dealt me a lousy hand, I would jump on my dirt bike and attack the track to work out my anger or frustration. That’s still the case, and all this COVID craziness has really worked my last nerve. Having all my favorite UTV trails closed all this spring has been so horrible, and being isolated from family and friends has been an extreme hardship. Slinging tons of sand is going to be so therapeutic!

One of my first assignments after joining the staff of then 3&4-Wheel ATV Action magazine was a photo shoot at Glamis, and I’ve been a dune fan ever since—for 35 years now. However, while cruising around that day looking for photo locations, I saw a BLM ranger riding a kid out of the dunes on a three-wheeler, and the kid’s wrists looked like two Zs. He had hit a witch’s eye, and there are a lot of things in the dunes that can hurt you or worse, like sidewinder rattlesnakes.

I compressed two vertebrae in the dunes, but it was my fault, so I’m still a big dunes fan. I can’t wait to get out there to nature’s thrill ride, but we all have to keep our wits about us as we push the limits. Because, as I write this, the OHV community has lost one of its most prominent members, Marty Smith.

Marty Smith was America’s first 125cc MX National champion in 1974 and 1975, and he won several MXGPs and the 1977 500cc MX National Championship. He was one of the most precise and stylish riders in motocross history, and he sold a lot of bikes for Honda. He personified the “You meet the nicest people on a Honda” ad campaign. He went from teen idol to icon of the sport, and he was inducted into the AMA Hall of Fame in 2000. He retired from MX racing in 1981 and started the Marty Smith Motocross Clinic. At Dirt Bike magazine, I went through one of his schools in the late ’80s, and I got to ride with him in one of his sand rails.

Marty and his wife Nancy were killed at Buttercup on April 27th in a roll-over crash of his four-seat sand rail. Their tragedy could have been prevented.

They were with friends Lee and Tammi Ramage and hopped in the buggy to watch the sunset from a big dune. “Just” cruising, they weren’t belted in, and they rolled it. The Ramages were belted in. Marty and Nancy were ejected, and the buggy rolled on them. It was so tragic. Godspeed, Marty and Nancy.

My first copy editor, Kay Dieken, told me early on that “just” is a four-letter word. Now I know that “just” can get you killed. Never, ever say I’m just going over here or just doing that. What we do is inherently dangerous, so we have to take precautions at all times. We have to strap in, and in California, we have to strap on a helmet before getting into a UTV. As Larry McReynolds says before the start of every NASCAR race, “Reach up and pull those belts tight one more time, boys!”

I know many people don’t like wearing helmets, but they are insurance. We test the Arai Ram-X in this issue and, while it’s expensive, it’s cheap life insurance. So are 4-point harnesses. Never put it in gear without strapping in (and hopefully on) first!

Have fun and stay safe!

YAMAHA IS TEASING A NEW MACHINE; HERE’S HOW TO LEARN ABOUT IT FIRST

GUIDE TO THE OREGON DUNES