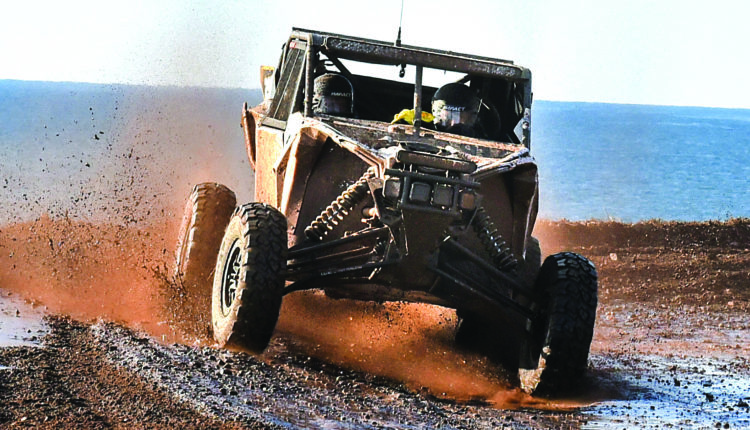 January is a time of year where I need a varied dirt vocabulary. Different kinds of dirt deserves specific names to describe them! I’m stoked to ring in the New Year with the start of the racing season at the Anaheim 1 Supercross and the Dakar Rally on the first weekend of the year.  I start getting pumped up for the new UTV and dirt bike racing season by watching last year’s SX rounds and by going dirt bike riding and UTV driving with my friends. Winter in California is like spring everywhere else. The rainy season is in full swing and the dirt is at its best.

I’ve always been fascinated by Dakar. I doesn’t matter  if it’s held in Europe and Africa, South America or now Saudi Arabia in the Middle East. Past Dakar Rallies in Peru and Bolivia have had their share of heavy rains and serious mud. There have also been many bone-dry stages where the many racers talk about “fesh fesh.” This is a term for gnarly silt sections. Although I’ve never raced Dakar, I’ve experienced serious silt in SoCal and Baja desert races.

“Fesh fesh” must be French for “face full” One second you’re riding on hard soil and the next your bike or UTV drops into dirt-colored baby powder. It explodes over the front of your UTV and blasts into the cabin. On a dirt bike, it comes up your legs in a wave, covers the torso and invades your helmet, nose and mouth. Worst of all, it completely blinds you for several seconds. In a UTV, at least you can be prepared with a fresh-air helmet system. It’s still horrible, machinery-wrecking stuff.

I much prefer dirt that has been packed and moistened by a nice, steady rain shower. Eskimos have 50-something words for snow. The Lump has a few words for primo winter dirt.

A key term in my dirt vocabulary is Hero Dirt. “Hero dirt” is dirt so packed and perfected by rain that it makes you feel like a hero. Traction is so ample that you can literally do things that aren’t normal on dry dirt. On a dirt bike, I wheelie up every hill and rail every berm, so much so that I’m usually sore for days afterwards. In a UTV, traction is so awesome that I hit every turn at higher speeds, and mat the throttle on every straight. It’s like “Velcro dirt.”

“Tracker dirt” is much like hero dirt. In the Mojave Desert sands, UTVs leave two lovely “chocolate stripes” after a rain. That makes it easy to track the riding group without having to stop and wait for the next guy at every turn.

No dirt vocabulary is complet without “Luscious loam”. Luscious loam is another term for Hero Dirt. My forestry school books and professors describe loam as a mixture of organic matter, clay and sand. As a motocross racer from the early ‘70s, loam had an entirely different meaning. Loam was the loose dirt on the outside of corners on an MX track. Loamy berms provided extra traction and drive out of corners, plus it was nice and soft when you fell in loam.

You get “Snow Sponge” after a snowfall on sandy trails. Snow fluffs the dirt up, and the loamy dirt is great for several days, sometimes a week! During Thanksgiving weekend last year, a snowstorm blanketed SoCal, and I had a blast in the T-Rex K-Rex on Thanksgiving Day. I rode in axle-deep snow on my dirt bike later that weekend. We had a blast playing in the powder and south-facing Hero Dirt sections.

I spent a lot of time in Colorado during my Dirt Bike days, hanging out with Joe Shedron, co-founder of Moose Racing. In summer, afternoon “traction storms” would blow through. We’d hit the trails of Rampart Range south of Denver for a session of sampling hero dirt. Those were the days!

I don’t like all the effects of a storm. Too much rain in too little time causes serious rain ruts on the trails. If they dry like that, the trails will be wrecked until the next rainy season. So, I plan rides after every storm, not only to have fun and frolic in perfect dirt, but to rehabilitate the trails. On “rain rehab” rides, I ride in the rain ruts, and I tilt the bike and turn the front tire into the taller wall created by the ruts. This way I scrub dirt into the rut to be compacted by my rear tire and the guys behind me.

Soils with a lot of clay can be a problem, too. Mud clings to the tires and chain and  slows forward motion. I’ve even had a stick penetrate my countershaft seal and blow up my KLX450R.  I had to get a buddy to tow me to a pick-up point. The caliche soil outside of Grand Junction, Colorado, is especially nasty. I feel for the people in Hawaii and a lot of other states with a lot of clay in the soil. Once I was racing Shane Watts’ KTM 200 at the Loretta Lynn GNCC in Tennessee. One second I’m cruising along a ridge, and the next second I’m doing a face-plant on red clay. Thanks, “Clay-os!”

Clay isn’t as bad in a UTV, but it can be a major pain trying to get it off of your UTV after a ride. Anyway, I hope your spring post-rain rides are as great as mine have been over the winter! Drive safe!

WHERE TO RIDE AND RACE YOUR UTV: WYOMING OHV TRAILS