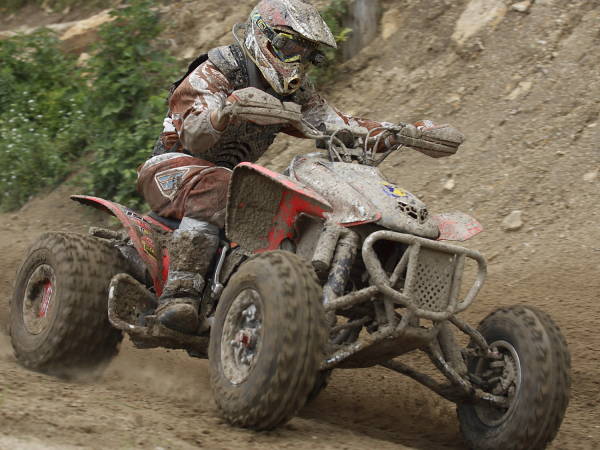 Bryan Hulsey battled overheating issues at the Motion Pro Spring Creek XC. The Dirtworks Motorsports Honda retired early in the event and had to settle for fifth place.
The Parts Unlimited OMA Nationals series was in Millville, Minnesota to contest round six of their ten race series. The motion Pro Spring Creek XC was held on the acclaimed national motocross track grounds. Bill Gusse and his crew laid out a trail that included portions of the famous racing facility track along with a good amount of track that would definitely not qualify as motocross. The dirt in the woods was perfect, thanks to an overnight shower, so dust would not be a concern at this event. Shane Gaunt blasted off the start to lead the pack through the Millville whoops section, up the one hundred foot hill climb, and off in to the woods. Young Mr. Gaunt was setting a very quick pace in hopes of running away with this race. Unfortunately a win would elude the Morton, Illinois racer again. Electrical issues sidelined his machine after completing four laps. Kyle Martin took over the lead and finished lap number nine with his Dirtworks Motorsports Precision Stabilizers Honda two minutes and twenty seconds ahead of Muscatine, Iowa racer Matt Lindle. The Quad City Quad Doctor Streamline Brakes Honda put in a good showing after a long absence from the series. Lindle was followed by Missouri racer John Pitts aboard the Duncan Racing Rekluse Honda to capture the final podium spot. The A class Honda machine of Andrew Snyder was the final racer to complete nine laps of the grueling event. Snyder took first in his class and fourth place overall. The top five was rounded out by Utility class racer Darryl Rath aboard his big Polaris. Third place at the OMA Nationals round six event in Minnesota went John Pitts aboard the Duncan Racing Rekluse Honda.
Shane Gaunt and Kyle Martin had a good battle in the first three laps. “I was looking to do pretty good today,” said Gaunt. “I’ve been riding every day and stuff. I thought we had our stuff together.” Too bad the electrical gremlins put an early end to the race for the Hinson Fasst Flexx Gaunt Motorsports machine. Lap two was Gaunt’s fastest effort aboard the Aupperle Racing Lonestar Honda, nearly thirty seconds quicker than anyone else managed all day. Lap number four was the final tour of the course for Gaunt. “My bike died over there,” he recalled. “I couldn’t get it started, then all of a sudden it started. I made it to over there, and it died and I couldn’t get it started again.” Kyle Martin was determined to finish the Motion Pro Spring Creek XC. Overheating conditions melted the radiator fan mounts off his Dirtworks Motorsports Honda, but Martin still put the machine through the Moose Racing scoring tent in first place.
Gaunt’s bad luck became good luck for Kyle Martin. Martin said “Shane Gaunt was running a good pace. He ran in to some problems, so I was able to get the lead.” The Maxxis Scott Goggles Honda developed some overheating trouble, but Martin was not going to quit. After the race he said “we’re just checking up right now. This sandy soil really plugs up the radiator.” The team checked the bike over and found a significant number of issues. “I was able to melt the brackets off my fan on my radiator,” noted Martin. “I burnt most of my oil and I’m sure I spewed out all of my anti-freeze. Real rough on the bike today as far as the heat, and I think some of the other guys had that come in to play for them as well.” The Pivot Works Wiseco Performance Products machine took the checkers, but there will be some repairs needed before the next round.

Shane Gaunt led the pack off the start for round six of the Parts Unlimited OMA Nationals at the Spring Creek Motorsports Park in Millville, Minnesota. Gaunt retired early with an electrical failure, and Kyle Martin took tthe victory after nine laps of Bill Gusse style torture.
Second place belonged to a young man from the rural Quad Cities area. Matt Lindle brought his mostly Mom and Dad sponsored Honda out for round six and collected himself a podium finish. Lindle was running a good pace after he finally got his machine to start. “I had to kick it a few times,” he said. “I ran behind two guys for the first two laps. We were racing hard. I got around the one and just was slowly catching back up to the other guy. I got around him and just kept my head down and kept pushing. Then on the last lap my chain came off two times, so I had to get it back on.” Luckily for Lindle he had built a good cushion between himself and the third place Moose Racing Honda of John Pitts. Lindle was happy with his speed, but said “whoever won, he was out there a ways. I didn’t have anything for him.” Shane Gaunt had a good race going but succumbed to electrical issues on his Gaunt Motorsports Honda. The Mortn, Illinois teenager put in some very fast laps only to stop on lap four with a dead machine.
Honda number three on the Motion Pro Spring Creek XC podium was the Duncan Racing Powermadd Honda of John Pitts. Overheating was an issue for Pitts at this event also, but the determined young man from Missouri decided he would take a chance after stopping early at the last event. “The overheat light came on about the second lap,” recalled Pitts. “I said, I’m not pulling out again. I’ve done it before. I’m just gonna run it.” The decision to take a chance on his machine worked well for Pitts today, setting him up with the final podium spot. “Bryan (Hulsey) threw a bucket of water on it and cooled it down for a lap and the light came back on again,” said Pitts. “Hopefully it didn’t hurt anything, but it got me to the end, at least.”
Fourth place went to Shane Gaunt due to attrition in the Pro ranks. Bryan Hulsey rounded out the top five Pro racers aboard his Duncan Racing UM Performance Honda. The overheat light was also shining on the Moose Racing Rekluse Honda, and Hulsey decided to play this one safe. He said “I made it about three laps. My bike was overheating pretty bad. I came in one time and hosed the radiator out. I tried to just go back out for points, to see if anyone else would run in to problems and I could pick up some positions. It overheated again on the very next lap. I came in again to fill the radiator and tried to go out again for the third time, and it still was running hot.” Hulsey was having second thoughts about his decision. “It was so early in the race that I knew it wouldn’t finish,” he recalled. “But seeing everybody else finish with hot motors is starting to make me think. Maybe I should have went ahead and tried to finish. I’ll go away with a few points, not too much. Hopefully I won’t get hurt too bad.”

Matt Lindle put in a good day at the Spring Creek OMA Nationals event. The youngster from Muscatine, Iowa captured second place with a solid ride.
The Motion Pro Spring Creek XC was another tough OMA Nationals event. A number of well prepared machines failed to complete the two hour test of man and machine. The men seemed to hold up better than the machines on this warm August day in Minnesota. After the checkered flag flew, Kyle Martin added another thirty points to his season championship tally with another victory, while defending Series Champion Bryan Hulsey had a disappointing finish. The boys from Missouri are battling it out and round seven moves to their home state. Check out omanationals.com for more information on the series that is keeping the off road in offroad racing. It was a rough day for Kyle Martin at the Parts Unlimited OMA Nationals round six event. The Missouri racer hung on for nine laps to capture another victory despite spewing antifreeze and hot smells emitting from his engine.