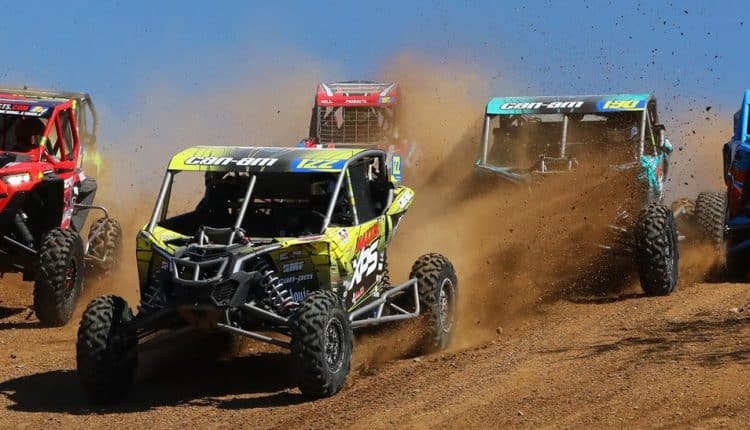 Matthew Hancock returned to the track where his racing career began and scored a tight victory in the SXS Pro class during the ATV MC WORCS Series presented by Polaris RZR events at Canyon MX. Hancock won from the second row on adjusted time and just edged out Cody Miller for his first victory in the class. Hunter Miller was third, ahead of Beau Baron and Beau Judge. In SXS Pro Stock, Corbin Leaverton won his second consecutive race.

The event was held on Canyon’s motocross track, as well as the Saguaro-filled and rock-strewn desert surrounding the facility. Rocks were prevalent and they definitely played into the track that got rough as both events commenced.

In the SXS Pro, Cody Miller snagged the holeshot with his brother Hunter just behind him. The pair are running Can-Am Maverick X3s in their first season in the series. Cody Bradbury quickly gained on the pair in his Polaris RZR and shot past Hunter Miller. Bradbury, who came into the event with the points lead, retired from the event with mechanical issues. Meanwhile, Hancock was quickly gaining on adjusted time in his RZR and took the lead for good.

“Once I saw I was running up front I just put it down,” said Hancock. “I tried to stay super smooth and not hurt the car and it worked out. It was dang close and every second counted. The track was brutal out there and the Polaris RZR took it like a champ.” 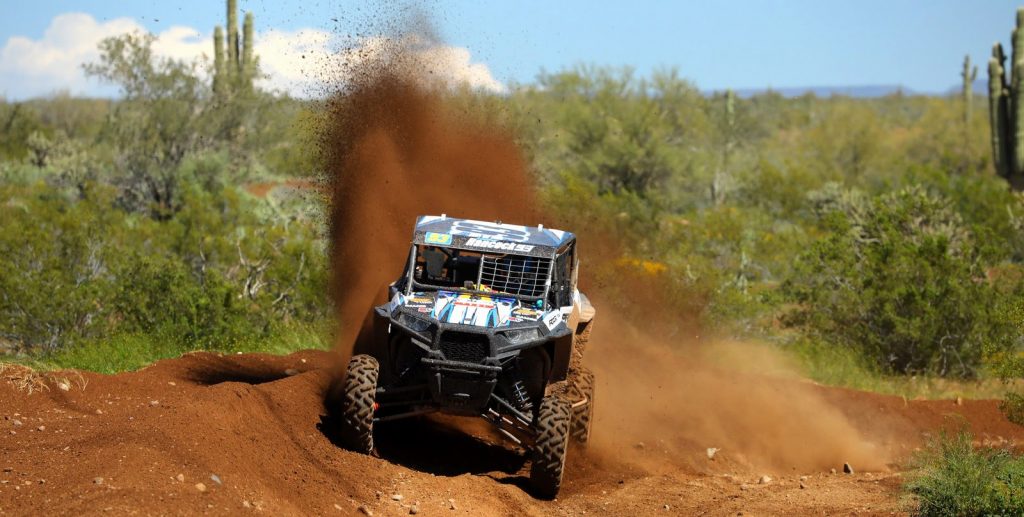 Hancock grew up just 30 miles from the track and spent his early racing days taming the motocross course. In fact, he earned his very first Pro victory here. “This is the first place I ever raced and it’s the place I got my first Pro ATV win, so to come back here to get my first Pro SXS win is pretty cool,” said Hancock. “I was down on points so I needed this.”

Cody Miller fell off the pace on the final lap when his machine experienced driveline issues. He held on for second, scoring his second runner-up finish of the season. That handed him the championship lead, seven points ahead of Bradbury. Baron is third in points. “I thought the race was happened where I was, but instead it was in the second row,” quipped Cody Miller. “I tried to drive the car smooth and fast and it ran problem free until the last lap.” 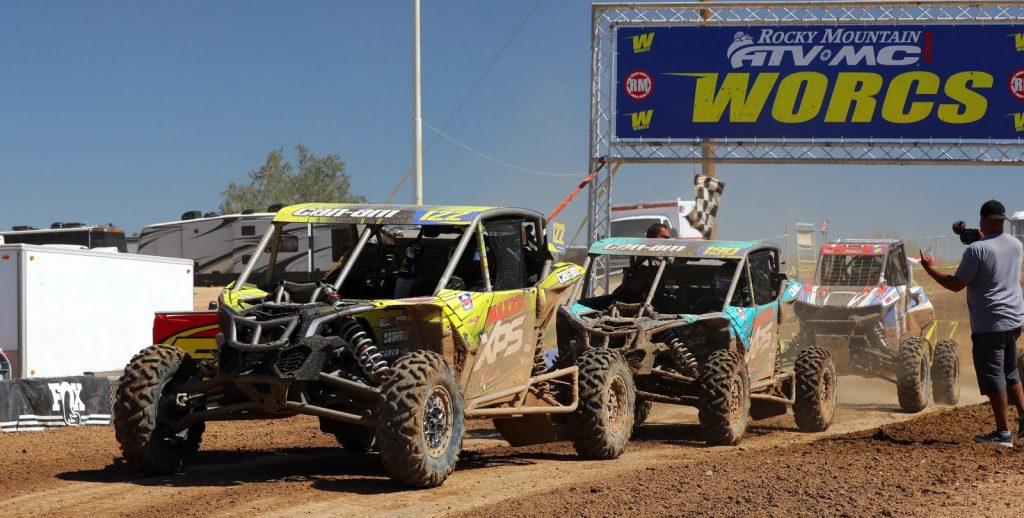 After surrendering a spot to Bradbury early in the race, Hunter Miller retook third when Bradbury fell out. From there, he attempted to pass his brother, but ran out of time and finished third, earning his first WORCS podium. “I was 11 seconds back on the final lap so I tried to put the hammer down and tried to make up time, but in the end it was decided by less than a second,” said Hunter Miller. “It was a rough course with a lot of rocks so it wouldn’t have taken a big mistake to end your day. I was trying to conserve my car for the whole race.”

In Pro Stock, Leaverton snagged the holeshot in his Polaris RZR RS1 and never looked back in taking the dominating victory and padding his lead in the title chase to nine points. Leaverton’s longtime friend Bradbury finished second. His girlfriend, Shelby Anderson, was third. Hancock and Chris Johnson rounded out the top five. 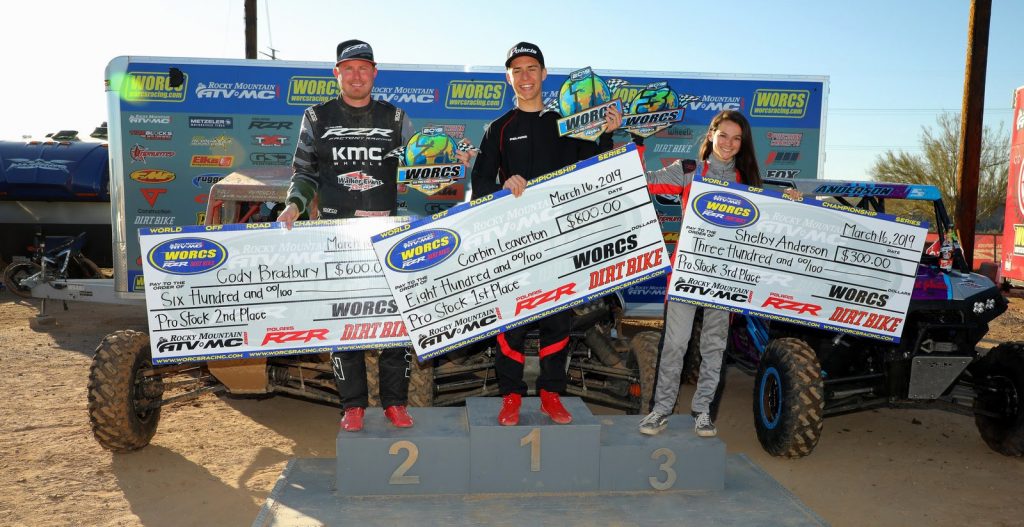 “This is the guy who really taught me how to drive when I was seven years old, driving an old Rhino,” said Leaverton. “It’s almost like racing yourself because we know each other so well. I couldn’t ask for anything else for Cody to be up here in second and my girlfriend in third. I’m pumped.” 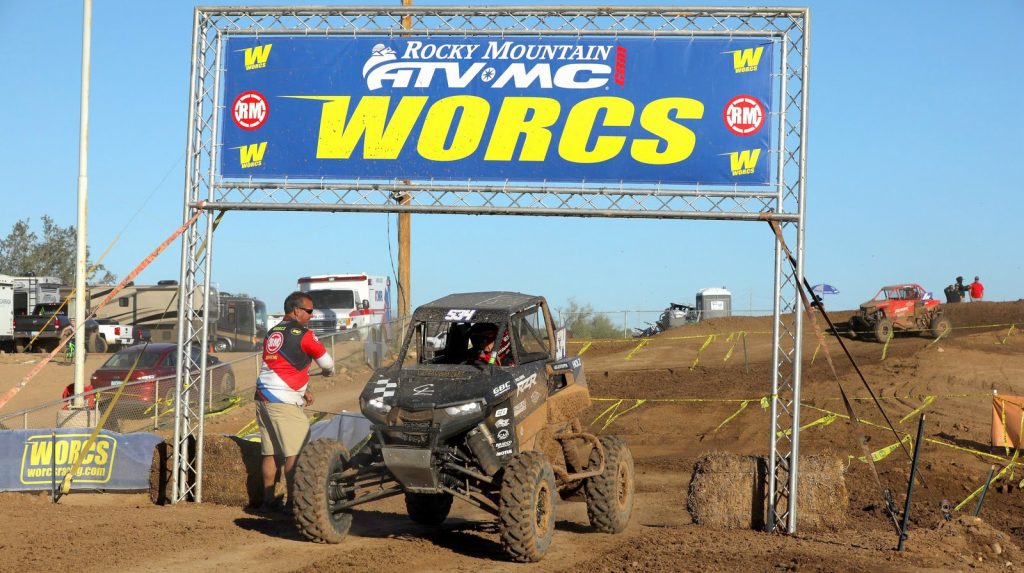 Bradbury, also in an RS1, was just behind Leaverton at the start, but made a mistake in the first turn, coming out on the wrong side of a fence. After backtracking, Bradbury tried to make up time, but finished second. “I’m just trying to maximize points and to lose to him is not a big deal,” said Bradbury. “We’ve driven together so much and he’s been around my program from the beginning. He knows all my moves and I know his.”

Anderson earned her first podium of the season and the first podium for a multi-seat Polaris RZR. Polaris RZR RS1 single seaters swept the SXS Pro Stock podiums in the first two races. The podium comes at a good time for Anderson and places her squarely in the top five in points. “It’s awesome to get up here,” said Anderson. “We’ve been struggling with the car and now it seems that we have it pretty figured out. Hopefully we can back up in the points and come out on top.”

The next WORCS SXS race will change things up completely as it heads to the tight indoor-outdoor, pavement-and-dirt course at Orleans Arena in Las Vegas. That race is scheduled for April 12-14.