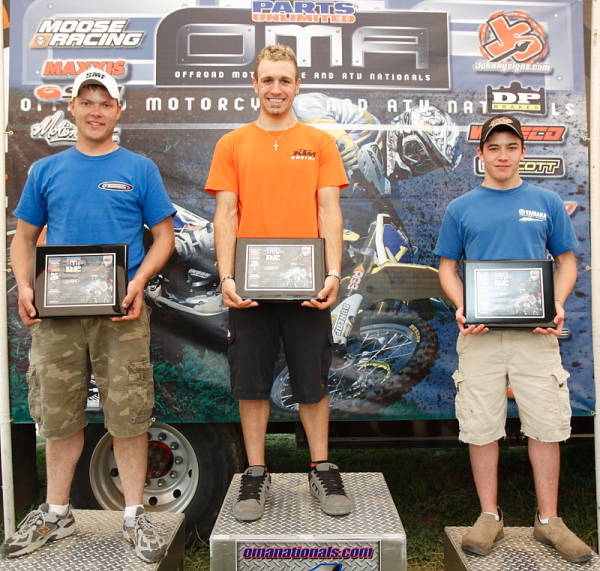 Second place at the Parts Unlimited OMA Nationals Coal Miner XC ws captured
by Yamaha mounted Brian Wolf.
Round three of the Parts Unlimited OMA Nationals series was held near Rio Grande, Ohio on Saturday, May twenty third with co-sanctioning by the Moose Racing Extreme Dirt Series. This round would be run on a track that race winner Adam McGill called “awesome.” The field sections were dusty, but conditions in the woods were near perfect. After one hour and fifty minutes of racing McGill blasted his Quadtech Precision KTM through the Moose Racing scoring tent to finish lap eleven with a lead of four minutes and two seconds over the GT Thunder Powermadd Yamaha of Brian Wolf. Walker Fowler followed Wolf with a gap of seventeen seconds to pick up the final podium slot. Kyle Martin picked up fourth place riding the Dirtworks Roll Design Honda, while reigning series champion and fellow Missouri racer Bryan Hulsey rounded out the top five aboard his Duncan Racing UM Honda. Adam McGill blasted through a creek on his pursuit of victory at the OMA
Nationals Coal Miner XC near Rio Grande, Ohio. McGill won the event with a
four minute and two second margin of victory.
Walker Fowler blasted ahead of the pack to capture the holeshot and the Maxxis Fasst Yamaha cleared scoring in first place to end lap number one. “I definitely liked it,” recalled Fowler. “I got the holeshot and lead the first lap. I’ve never done that before. It was pretty cool.” Fowler trailed McGill by three seconds at lap two, and ended his eleventh lap behind the Yamaha of Brian Wolf to capture third place at his first OMA Nationals event. Reigning OMA Nationals champion Bryan Hulsey took his Dirtworks Honda to a
fifth place finish at the OMA Coal Miner XC.
Adam McGill charged out front after overtaking Fowler on the second lap. According to McGill “the race went really well.” The Ohlin Fasst KTM racer said “I liked the track a lot. Definitely a lot of fast sections, little off-cambers, a little slick, but, I mean, for the most part it was pretty kick a, for sure.” McGill was pleased wit the performance of his KTM machine. “I’ve been doing a lot with shocks and trying to get the bike better,” he said, adding, “Baldwin Motorsports built me one heck of a motor.” According to the Scott Goggles Motorex racer “It was actually really cool. I liked it a lot. It was a good track. I enjoyed it a lot.” The Martin Plumbing Dirtworks Honda of Kyle Martin blasted through the rural
Ohio woods headed to a fourth place finish at the Coal Miner XC.
Second place went to Brian Wolf riding a Hyper HMF Yamaha. He said “The track was a lot of fun. It was kind of short, but a lot of fun. Creeks, ravines, hills, fields, it had it all.” Walker Fowler took the holeshot at the Cole Miner XC and finished his day
with third place.
Kyle Martin collected fourth place with his Dirtworks Motorsports Honda on a day the Missouri racer said he was “just happy to finish.” Martin said “we had some issues with the bike before the race and I think we go them worked through good enough to finish. We ran a pretty solid race.” Meanwhile, Bryan Hulsey had another less than typical day aboard his Moose Racing Dirtworks Honda. “It was good to have a good race today,” recalled Hulsey. “Obviously you want to be up on the box there,” he stated, but “I was glad to finish.” The Washington, Missouri racer managed fourth place, finishing his eleventh lap at one hour, fifty seven minutes, and thirteen seconds. Race winner Adam McGill was all smiles after completing the DP Brakes Coal
Miner XC.
The weather finally cooperated to provide good race conditions for a course that racers called awesome and fun. It was a good day to have fun at the DP Brakes Coal Miner XC. Bill Gusse and the Parts Unlimited OMA Nationals crew created another event that would challenge and entertain hundreds of racers and fans on a piece of land that was graciously provided by the Fallon family in rural Ohio. The podium was graced by three new racers, and the points lead held by Shawn Hess has been eroded with a fifth place finish by Hulsey while Hess only managed to place seventh at this event. They continue to mix it up in this series that maintains a unique niche in the motorsports world with old school courses laid out by a man who delights in challenging racers and pushing them to their limits. Check out omanational.com for more information and a schedule of the seven remaining rounds of the Parts Unlimited OMA Nationals series. This is offroad racing.