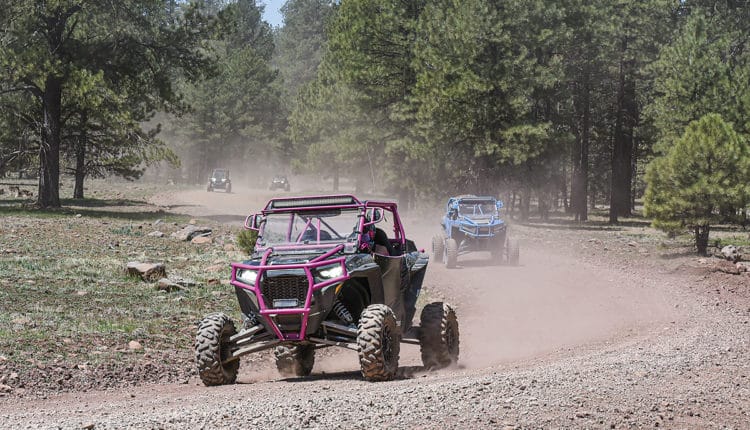 The Mormon Lake UTV Jamboree was held this spring at the Mormon Lake Lodge southeast of Flagstaff, Arizona, and the Grand Canyon. The UTV Rally was put on by the same people who promote Arizona’s International Off-Road & UTV Expos, and many of the jamboree’s vendors also attend the Arizona Expos. The Mormon Lake UTV Jamboree had guided daily rides leaving at 8 a.m., 9 a.m. and 4 p.m. in the beautiful Coconino National Forest on Friday and Saturday. Coconino contains thousands of miles of trails in beautiful, healthy forests. Trails included graded Forest Service roads, logging roads, and unmaintained trails of varying terrain for all skill levels, and trail rides ranged from 35 to 50 miles so that riders could be sure to have time for the many other activities the rally offered.

Thousands of people attended the rally, with the Mormon Lake Lodge having 74 RV campsites with hookups plus dry camping, and there was another campground with 80 spots. All were filled, and thousands camped for free in the Coconino National Forest. People can camp for 14 days before having to move, sometimes only a few feet, to another campsite. Promoters sold five times the entries they had expected. There were nightly bonfires with s’mores and product giveaways, afternoon Hooptie-X races both days with beater $600 cars, afternoon Kawasaki Teryx 800 S and KRX1000 demo rides, a daily Vendor Village with jamboree specials and installations, and more family entertainment. Many attendees also explored the awesome trails on their own and visited the Vendor Village for great deals on new products and to try out the new 2021 Kawasakis.

Traditionally, the Rally is held the last weekend in April, but it was postponed a week for 2021, and the weather was beautiful. UTV Action had a great time at the event and plans on attending next year. Mormon Lake Lodge is a great place to beat the heat in high-country Arizona this summer and fall, and we found an awesome 62-inch trail (#241) just a few miles from rally headquarters. Stay tuned to UTV Action magazine for 2022 dates, and we’ll report on new trails in the Coconino National Forest as we find them. Mormon Lake Lodge also has cabins for rent, a steakhouse, a pizzeria, horseback riding, a kids’ trout pond and holds other events, including weddings. It opened in 1924 in the heyday of ranching and logging in Arizona. The Off-Road Camping Expo will be held at the Phoenix Convention Center December 10–12, 2021.