In 1964, US-American Bruce Meyers assembled his handmade and open to the elements – without doors or roof – based on a shortened VW-Beetle chassis, dune buggy. He was seeking an alternative for heavy four-wheel drive SUVs, in order to move faster through the Californian dunes. The first buggy to be built, the “Meyers Manx”, was born. In 1967, he proved that he had indeed created a real alternative when he set the record race time crossing from Tijuana to La Paz in his first Monocoque-Manx. 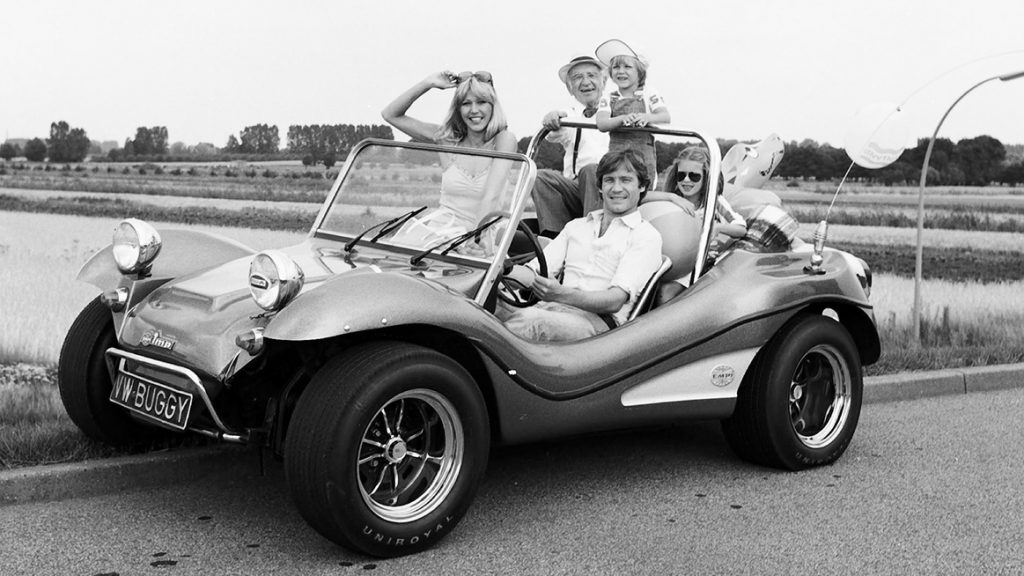 Quickly, the fun car conquered the wide beaches of the American coastlines and became a cult-classic car of the 70s. Up until the 1980s, around 250,000 individual Beetle-based vehicles were built worldwide – as one-offs or at low volumes: From the Beetle Cabriolet to special bodies from companies such as Hebmüller and Rometsch and the famous, completely open Meyers-Manx Buggy.

Drawing inspiration from the classic Californian dune buggies of the 1960s, the Volkswagen ID. Buggy concept was shown Wednesday for the first time in North America at the New York International Auto Show.

With a minimalistic design with no roof, no doors and a weatherproof interior, the 2-seater shows the versatility of the modular electric drive matrix (MEB) and puts the fun in functional. The MEB chassis integrates a 62kWh lithium-ion battery into the floor and a 201-horsepower electric motor in the rear to give it an expected range of 155 miles on the WLTP cycle.

The floating effect is created by the use of two colors next to each other. The top half of the car — most notably the striking fenders and shoulders — is painted in matte Fern Green, while the bottom portion is painted in a textured Grey Tech Blue. The green part visually floats above the dark blue area. 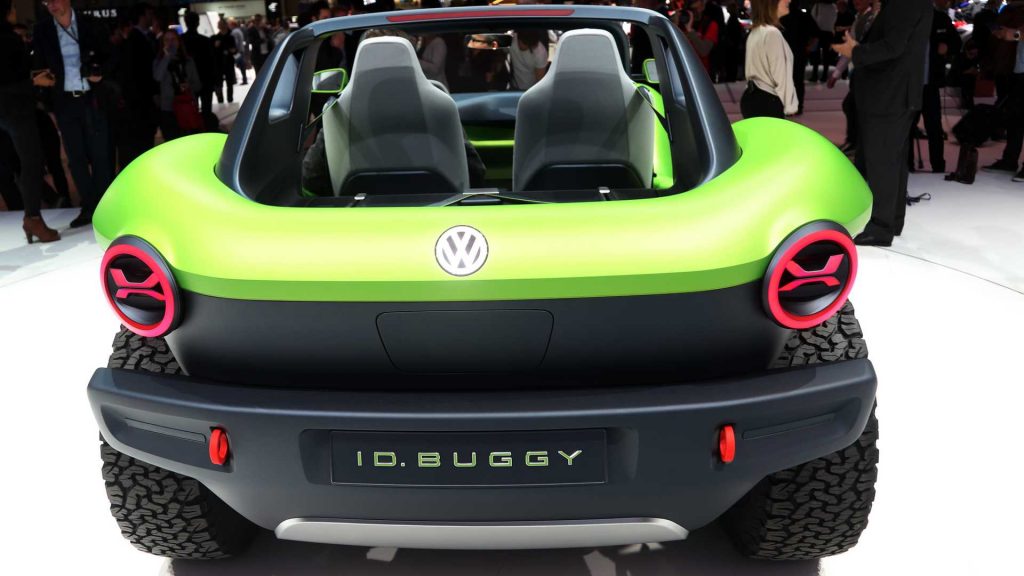 ID. BUGGY is equipped properly for an all-terrain vehicle. It features standard 18-inch wheels and BFGoodrich All-Terrain T/A off-road tires (255/55 at front and 285/60 at rear). A solid aluminum underbody guard ensures that the front axle and ancillaries are not damaged during off-road driving, and the aluminum side sill panel assumes the function of an additional underbody guard. Should another vehicle need a tow or should the BUGGY itself be incapacitated, two robust red steel eyelets are integrated in the bumpers. 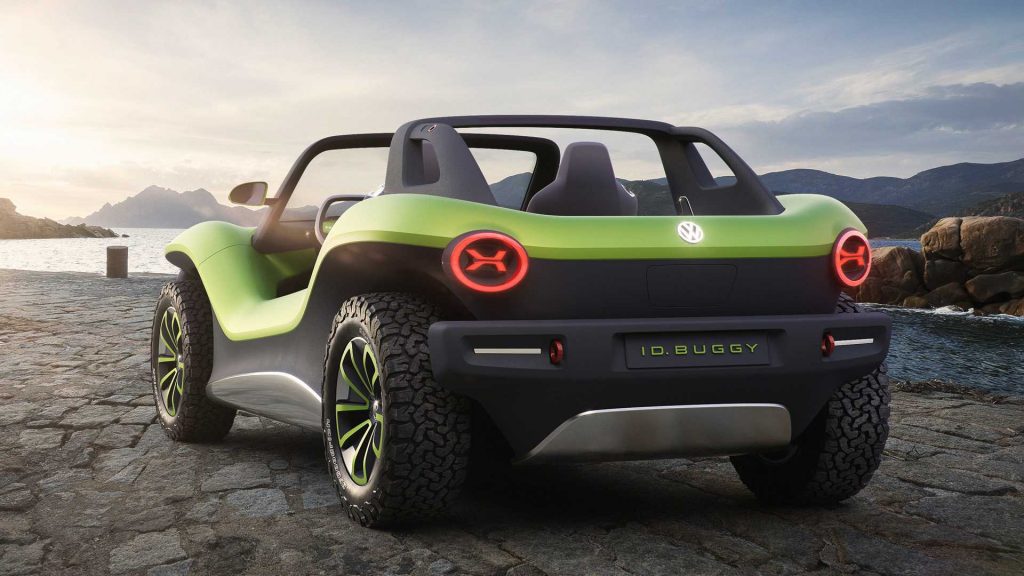 The ID. BUGGY’s minimalist interior is characterized by easy handling and waterproof materials. All elements surrounding the exterior are a continuation of the body, painted in Fern Green, while the majority of the interior trim is finished in a robust Grey Tech Blue soft-touch paint. The driver and passenger sit on seats with headrests and belt guides integrated into the backrests, while the floor plate is outfitted with anti-slip knobs. 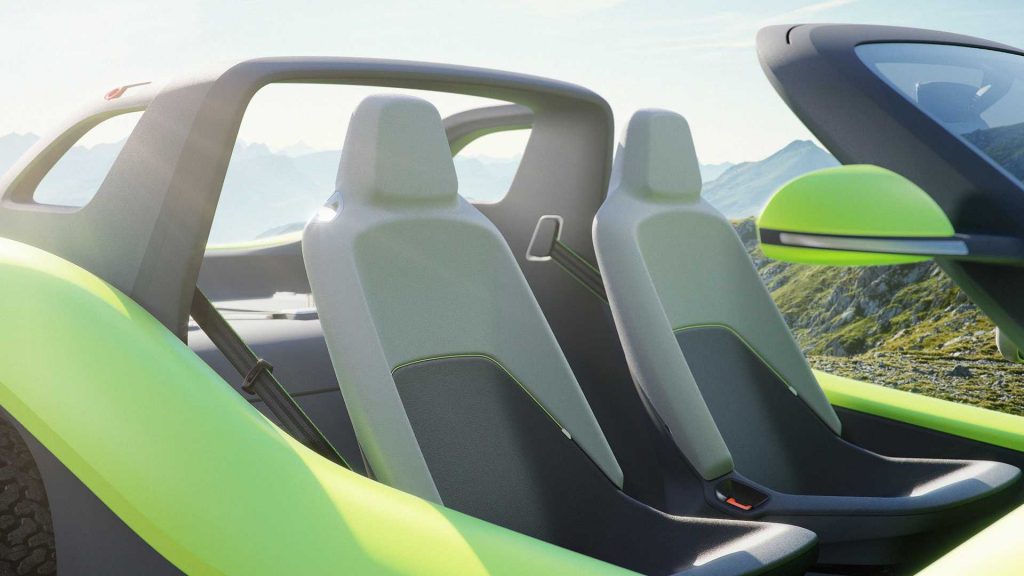 Despite the shortened wheelbase of the concept car, passengers have an unusually large amount of space. This is due to the ID. family’s compact electric drive and axles arranged further to the outside. This open space always provides room that is about one class above that of comparable cars with a conventional drivetrain. 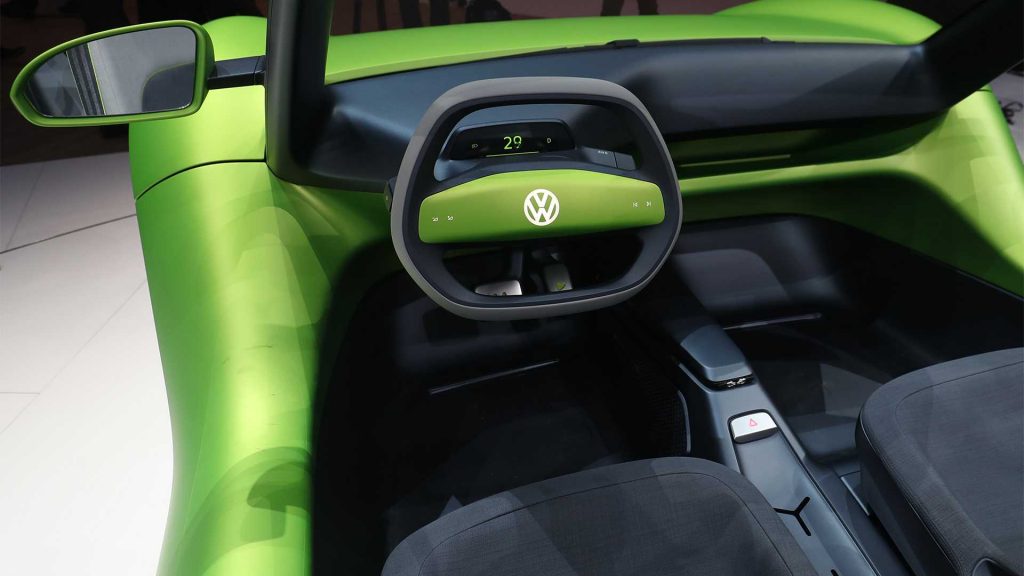 The minimalistic cockpit has been designed to match the character and design of the ID. Buggy. With the “Hey you” display in the cockpit, the concept car greets its driver and draws attention to the fact that it is ready for operation. A hexagonal steering wheel, covered with water-repellent Nappa leather, features touch controls in the crossbar, and a digital instrument cluster keeps the dash uncluttered.

The zero-emissions drivetrain of the ID. Buggy is made up of the electric motor integrated in the rear axle, power electronics, a single-speed gearbox, the high-voltage flat battery (62 kWh) arranged in the car floor to save space, and the additional units integrated in the vehicle front end. The electric motor delivers 201 horsepower and maximum torque of 228 lb-ft from standstill. This means that the electric vehicle always provides enough power on the rear axle, even off-road. The concept car sprints from zero to 62 mph in just 7.2 seconds. The maximum speed is electronically controlled at 99 mph. 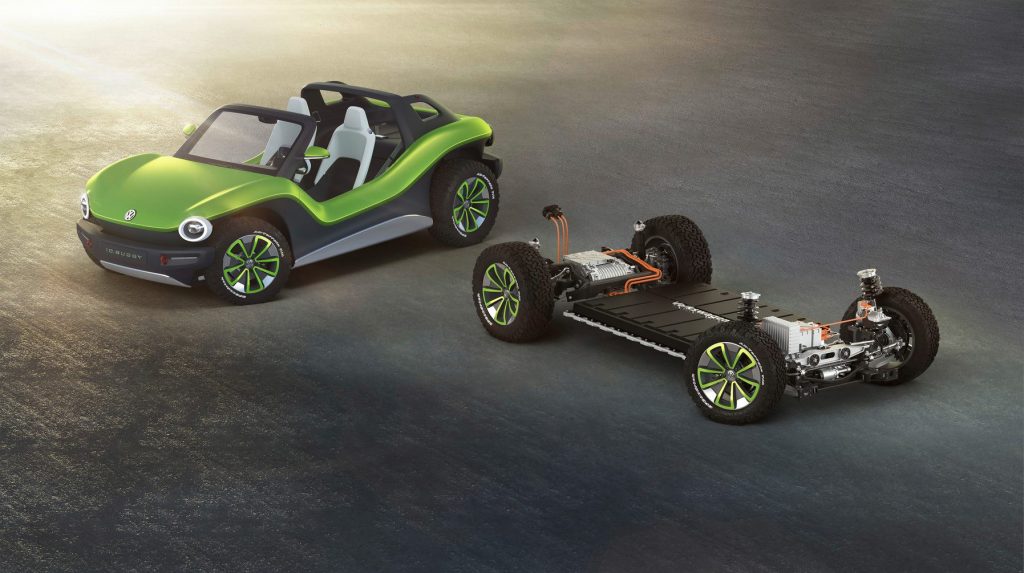 As an alternative to the rear-wheel-drive layout, it is also possible to fit a second electric motor in the front axle of the ID. Buggy. In this case, an “electric propshaft” would distribute the power of the 4Motion four-wheel drive between the front and rear axles in fractions of a second. 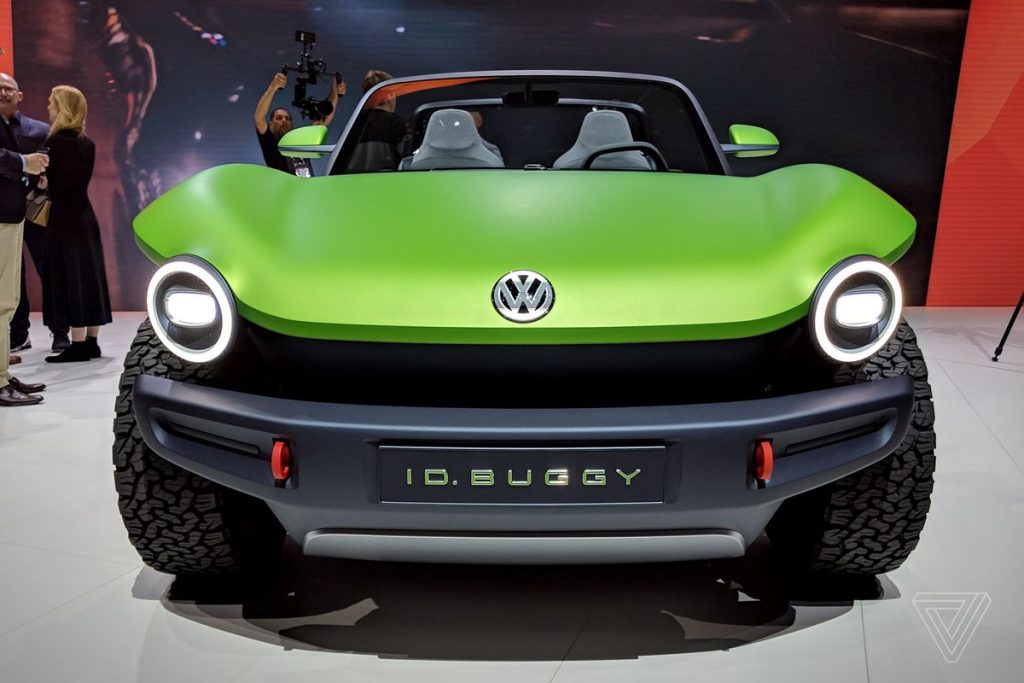