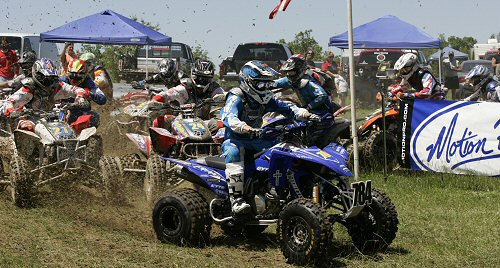 Article and photos by John Gasso The Parts Unlimited OMA Nationals series started 2008 with two mud fest races, but Mother Nature finally cooperated for the round three Motion Pro Coal Miner XC held outside Rio Grande, Ohio. The OMA Nationals series is known for their tight, technical trails and the first two rounds added massive mud to the mixture. Apparently promoter Bill Gusse decided to give the racers a bit of a break with round three and the course was more open and fast than usual. We expect the balance of the ten race OMA Nationals series to return to the more technical style after this brief interlude. The round one Maxxis Hangman XC near Hanging Limb, Tennessee worked out well for three time series champion Rob Zimmerman aboard his Maxxis Moose Racing Honda after the Powermadd Rekluse Honda of David Reed ground to a halt with a stripped front sprocket just one lap before the race conclusion. Current series champion Andy Lagzdins collected second place aboard his Duncan Dirt First Honda after he passed Mississippi racer David Crane near the end of the race. Crane was struggling with numb hands from the cold and wet conditions, and could not switch his fuel to the reserve after sputtering to a stop on course. The Rekluse KTM of Crane finished third after he finally managed to get restarted on the last lap. Ballance, Sommers, and Zimmerman going at it

Round two saw the program heading to Millerstown, Kentucky for the Kentucky Off Road Hare Scrambles series co-sanctioned Sidi Indian Bluff XC. Days of rain preceding the event made even the parking lot an off road experience. Brandon Sommers lost out on the hole shot to fellow Yamaha racer Bill Balance but the GYTR GT Thunder Yamaha of Sommers would cross the finish line with a lead of over six minutes ahead of the Aupperle Racing Scott Goggles Honda of series rookie Shane Gaunt. Ballance left the event early with mechanical issues. Missouri Hare Scrambles champion Brian Hulsey collected third place aboard his Enduro tire Duncan Dirt First Honda after a day where he said “staying out of trouble was the main thing.” Rural Rio Grande, Ohio was host to the OMA Nationals round three Motion Pro Coal Miner XC on the Fallon family property, and everyone was treated to a wonderful day and a good crowd of Pro ATV racers. Brandon Sommers once again proved that he can adapt to whatever conditions are presented. Sommers’ GYTR Yamaha led nearly the entire race, with only a brief delay in a bottleneck removing him from the lead for a short time. Donnie Ockerman battled with Sommers all day, but his GT Thunder Yamaha would cross the Moose Racing finish line just seven seconds after Sommers. Mark Notman finished third aboard the National Guard Rocky Mountain Atv Honda after completing his twelfth lap of the course with a time of two hours, four minutes, and forty four seconds. After three rounds of competition Brandon Sommers has been on top of the OMA Nationals podium twice. Seven different racers have occupied each of the other podium spots after some interesting and exciting races. The series in unique in its track design and laid back, friendly atmosphere. According to current number one plate holder Andy Lagzdins “The series is steadily growing. The quad end of it is getting bigger and attracting more people. It was just a matter of time, because the tracks are really good. It’s really good cross training for the GNCC guys that are running that series. It was just a matter of time before people found out about it.” That growing popularity is making the defense of his series title a little more difficult for Lagzdins, but he seems happy with the challenge. This is not the biggest off road racing series, but racers keep showing up to experience a different brand of the sport promoted by a man that spends serious time in the woods with just a machete and his dogs creating race courses that are unique, interesting, and challenging. Check out www.omanationals.com for your next chance to experience the Parts Unlimited OMA Nationals racing experience. This is off road racing.